“I was totally surprised,” Rupenthal said after being named the 2017-18 Rotarian of the Year late last month by the Rotary Club of Carmel. 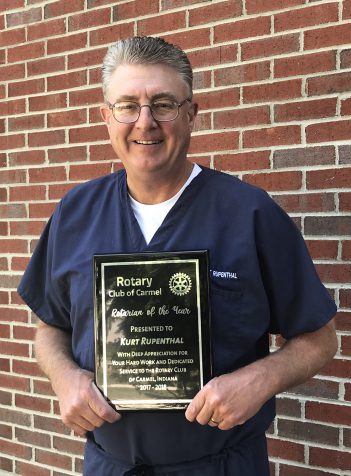 John Stanley, who was club president until July 1, said Rupenthal was very deserving.

“Kurt does many things behind the scenes to help people and does it for the true reason of helping people and does not do it for recognition or something in return,” Stanley said. “He is also a past president of the club and is very involved in the youth services part of Rotary and has a passion for helping young people.”

Rupenthal, a 59-year-old Fishers resident who has been a dentist in Carmel since 1985, is the organizer for the Rotary Interact club at Carmel High School. Rupenthal said the service club was inactive this past school year but he is looking to rekindle it for the 2018-19 school year. He also serves as the club coordinator for the Rotary Youth Leadership Award camp and is the district chairperson for Rotary Interact in central Indiana, Rotary District 6560.

One of his major roles is his many years of Rotary service to CarmelFest. He was the parade marshal July 4 and plans to serve in same role next year.

“My job is getting all the maps, getting everyone lined up and ready for the parade,” he said.

He has been parade chairman or marshal for many years. CarmelFest celebrated its 30th year July 3-4.

The Rotary Club of Carmel began running CarmelFest in 2004.

“I am very proud of the work of the Carmel Rotary Club over the past 30 years and I am glad to have been associated with such a fine group of people,” Rupenthal said.