Keegan Connor enjoys the full attention she receives during the CarmelFest Has Talent competition.

“It gives you the whole three minutes or so to everyone listening to you or (not) taking their eyes off you,” she said. “It’s just having fun and showing (the audience) how much you can do. It’s a chance to put yourself out there.” 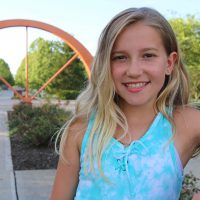 Connor, who turns 12 July 17, is one of six semifinalists for the CarmelFest Has Talent 15-and-under division for vocalists. The semifinalists compete at the Gazebo stage from 3 to 5 p.m July 3. The top three finishers will compete for the top prize from 3:30 to 4:30 p.m. July 4 on the same stage.

This will be Connor’s second appearance in CarmelFest Has Talent. She won her age group (12-and-under) in 2016. There are new divisions this year.

“I love that she has a backstory to each song,” said Connor, who is headed into the seventh grade at Westfield Middle School. “It’s about her life or a friend’s life or what people go through. It always has a meaning behind it.”

Connor performed in the Jr. Civic Theatre’s “James and The Giant Peach” for the first time in June. She was in the ensemble but also had a solo. She has performed in eight shows for Christian Youth Theater.

“Ever since Keegan was 2 years old, she’d sit at the piano and play and sing,” said Sheryl Matthys, Connor’s mother. “She’d even page-turn the book even though she had no idea what notes she was reading. She’d sing into her play karaoke machine and strum a child’s Disney guitar. Performing is in her heart, and if she learns of a place to perform and sing, she enters it.

“Keegan loves watching Disney shows to observe the singers (and) performers and how they sing and dance. Disney and pop are her favorite genres. She loves Grace VanderWaal for her courage to write her own songs. Keegan has written her first song and hopes to perform that someday soon.”

Connor said she is almost finished with that song.

“I just have to figure out some piano parts,” she said.