You are at:Home»Current in Noblesville»Noblesville Community»Sweazy releases third book in series

Noblesville author Larry Sweazy recently released the third and what he said will likely be the last book in his Marjorie Trumaine series.

The book, “See Also Proof,” was released May 1. 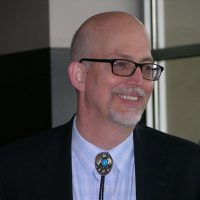 The series follows the path of Marjorie Trumaine in the 1960s. Trumaine is a well-read, freelance indexer who assists the local sheriff in investigations.

“She reads a lot of books and knows a little bit about everything,” said Sweazy, who has been writing for 20 years. “She begins to investigate (with the sheriff), and it becomes an amateur sleuth novel.”

The 57-year-old is working on his 15th book, a historical thriller set in 1934, scheduled to be released next year.

Later this month, Sweazy will take part in a book-signing event from noon to 4 p.m. June 30 at Barnes and Noble, 17090 Mercantile Blvd., Noblesville, for his writing contributions to “The Trading Post and Other Frontier Stories.”

His story in the collection, “The Prairie Fire,” is about two Native American sisters who solve a murder before a more dangerous fate befalls their tribe. The story is set in Noblesville’s Strawtown Koteewi Park, a place where Native Americans once lived.

“This story is the first frontier-based short story I’ve published in several years,” Sweazy said. “This anthology features stories by some talented writers and good friends.”