Ken Rabbers has always enjoyed hiking, camping and being outdoors. When photography became an interest as well, it’s no surprise that nature and landscapes became his focal points.

“I have always had an admiration for our natural world and quickly found myself wanting to explore it in greater detail and to try to capture the beauty and uniqueness that it offers,” said Rabbers, who is something more than a talented amateur.

He is an Indiana Artisan. 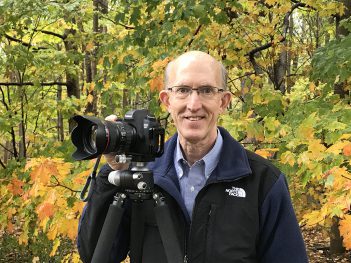 A Carmel resident, Rabbers received the designation June 7 after his art photography was judged to be among the best in the state. The Indiana Artisan program was created 10 years ago by former Lt. Gov. Becky Skillman to promote, fine and handcrafted art and food products created by Hoosiers.

Rabbers, who took up photography in the early 1970s, is one of nearly 20 Hamilton County visual and food artists who have received the Indiana Artisan designation. Applicants are juried by a panel of business development, retail, arts and culinary professionals.

“My first reaction was surprised and feeling honored,” said Rabbers, 66. “It means a lot more than I can express. Being juried in and accepted by other artisans and professionals, and not just those in my field, means that I have connected with others and been able to show them that I have developed my craft to a point that I am more than just a photographer.”

A retired civil engineer, Rabbers spends time working in the Indiana Artisan Store in Carmel and the Art IN Hand Gallery in Zionsville. He also volunteers once a week at IU North Hospital in Carmel.

When not working or volunteering, Rabbers plies his photography craft as often as he can.

“I am constantly trying to learn and to improve my techniques to better express what my mind sees when I compose a shot,” he said. “I get to be outdoors looking for those special views that a lot of people look at but fail to ‘see.'”

Rabbers’ work can be found at the Indiana Artisan Store, 111 W. Main St., in the Carmel Arts & Design District. For more about Indiana Artisans, visit IndianaArtisan.org/join.