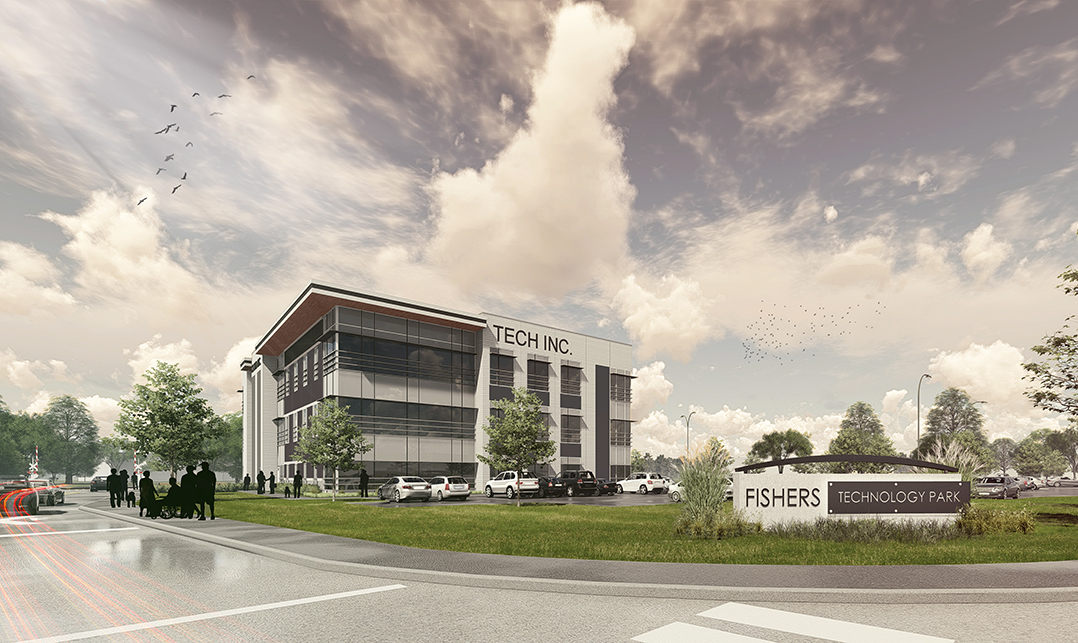 A rendering of HG Technology, a 31,000-square-foot office building proposed as a Tech Park gateway in downtown Fishers. (Submitted image)

At its June 18 meeting, the Fishers City Council heard an introduction for a new office building, HG Technology, to be built as a Tech Park gateway building by Hageman Group in partnership with the City of Fishers.

The building will be a Class-A, multi-story office building at 8939 Technology Way and will encompass 31,000 square feet. The company plans to invest $8.5 million.

Economic Director Brandon Dickinson presented the project to the council. He said the project will serve as a catalyst for more development.

“This would add needed office space to our downtown office inventory,” he said. “We can’t build it fast enough for the demand we have for people that want to locate their business and talented workforce to downtown.”

The company has 30 months to pre-lease to tenants. If it succeeds, the city will provide $2 million in bond proceeds and $50,000 for utility allowance and waive impact fees to offset development costs. If the company sells the building within its first five years, the profit will be shared with the city.

“I think that’s something that’s new that we think is appropriate,” Dickinson said. “If we are able to put public dollars into a project and it’s successful, the city should be able to be entitled to a share of the fruits of that labor.”

The building backs up to the Nickel Plate Trail and is across from Meyer Najem Construction on Lantern Road.

“Innovation companies are looking for a place to call home in Fishers, and this development provides another opportunity for growing companies to join the entrepreneurial economy here in our city,” Fishers Mayor Scott Fadness stated in a press release.

The council unanimously passed the economic development deal between Hageman Group and the City of Fishers.