You are at:Home»Current in Zionsville»Zionsville Community»Campbell sisters cap special season

For senior Anna Campbell, she knew this was a move she had to make. 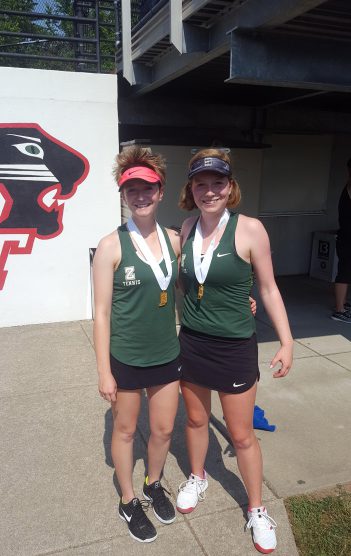 After three years playing No. 1 singles for the Zionsville Community High School girls tennis team, Anna had the opportunity to play No. 1 doubles with her sister Lauren, a sophomore.

“We knew this was our last chance to play together,” Lauren said. “We know each other’s games as well as we know our own. We cover well for each other’s weaknesses. We just work well together.”

Anna said she expected the duo would do pretty well in the state tournament.

“I was really pleased with our season,” she said. “I wish our draw could have been different for the state finals.”

“It was awesome we got that far,” Anna said. “It was really good competition. We had a lot of fun with it. Our goal was to get to state, but I think we surpassed expectations with some of the big wins we had.”

In the team regional, the Campbells lost the first set 6-0 and were down 3-0 to Brownsburg’s Caitlin Predin and Payton Haygood before rallying for the three-set victory.

“We had an ability to fight and stay in matches other people would have already checked out of,” Anna said.

The Campbell sisters finished 22-4, also losing to Cathedral’s Koscielski and Coleman in the regular season.

“We get along on and off the court,” said Lauren, who played No. 1 doubles with Simryn Kapur as a freshman. “We’ve never had too many issues, except for the little things.”