You are at:Home»Current in Zionsville»Zionsville Cover Stories»Road to retirement: WTHR anchor John Stehr puts retirement on hold to assist co-workers 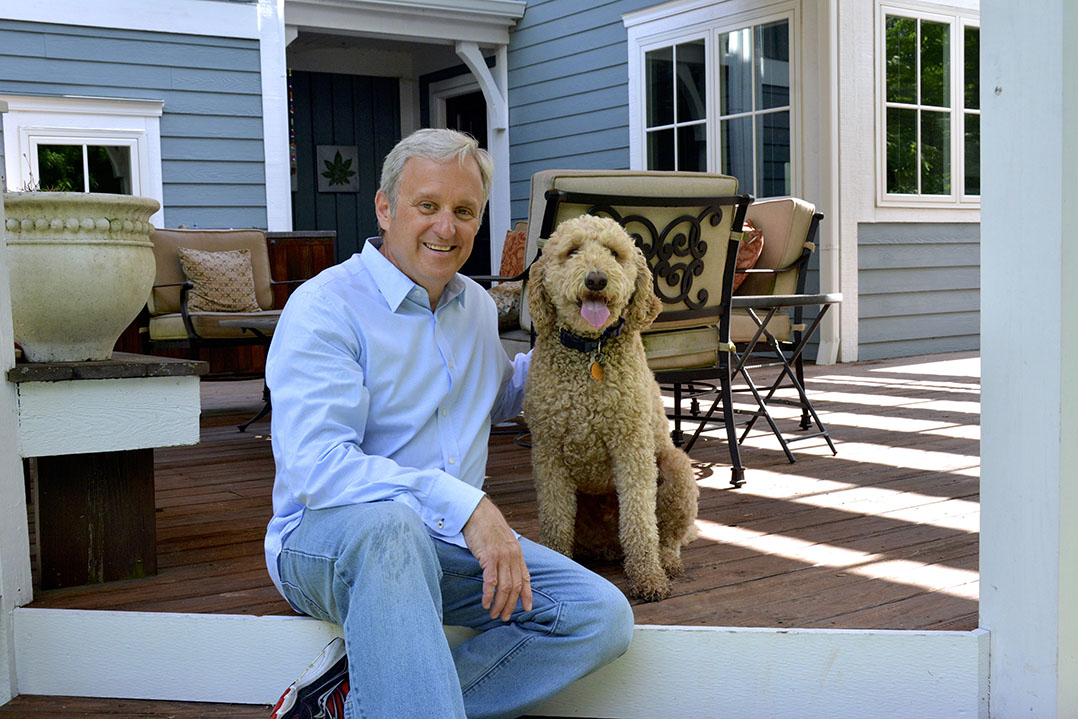 John Stehr relaxes at his Zionsville home with his dog, Cash. Stehr was set to retire this month from WTHR-13 but is holding off until his co-anchor recovers from a medical issue. (Photo by Lisa Price)

John Stehr began to ponder a path to retirement following a medical scare. In July 2017, the WTHR-13 co-anchor had open-heart surgery to repair a thoracic aortic aneurysm.

Stehr had yearly check-ups on the aneurysm when it was detected, before surgery was deemed necessary. The long recovery process gave him time to ponder his future.

“When you have time to sit and think, you tend to sit and think,” he said. “I realized it was time. A 42-year run in broadcasting is pretty good. I loved the career and now can turn my attention to other things.”

However, a turn of events at the station has caused Stehr to postpone his retirement. 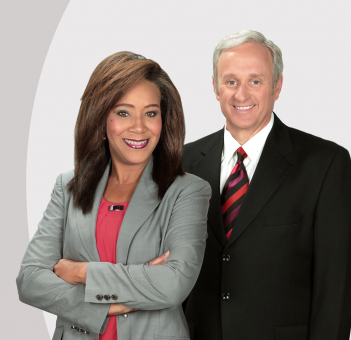 Co-anchors John Stehr and Andrea Morehead have covered for one another during difficult medical issues. “Our friendship extends to our families,” Morehead said. (Submitted photo)

His team at WTHR-13 was so supportive during his own recovery that when co-anchor Andrea Morehead, who shares duties with Stehr and Anne Marie Tiernon, announced she had breast cancer in early May, Stehr committed to postpone his retirement for as long as he is needed.

“Everyone was very supportive of me when I was going through my medical issue last year, both my co-workers and bosses,” said Stehr, who turns 60 Aug. 20. “Offering my support to them now is the only right thing to do. I feel fortunate to be in a position to be able to help.”

Morehead is appreciative of Stehr’s decision.

“He very well could have stayed committed to his June 20th retirement date, but after revealing my health fight with breast cancer that will have me on and off the anchor desk for several months while I undergo treatment, John immediately told me he would work indefinitely, so that I could focus on healing,” Morehead said. “The kind and heartfelt gesture is much appreciated and echoes our commitment to help one another that goes beyond just being co-workers. Our friendship extends to our families, and his wife Amy has been an angel with delicious prepared meals.”

Even after he retires, Stehr said he will be a contingent employee for WTHR, helping on Indy 500 race day coverage and some fill-in anchoring for a couple of years.

“I can keep my toe in the water without having to tread water every day,” he said.

Although it will be nice not to stress over ratings, Stehr knows he has been fortunate.

“I’m one of those people that knew from the time I was 5 years old what I wanted to do. I’ve never wavered and really never wanted to do anything else,” Stehr said. “I remember specifically when I was 5 years old, we were sitting down to watch (CBS News anchor) Walter Cronkite and my family was being a little bit noisy. I was the one saying, ‘It’s time to be quiet, Walter Cronkite is coming on.’ I would watch the evening news every night.” 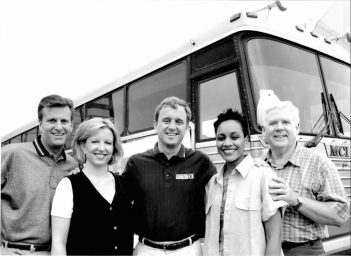 Stehr and his cohorts on the “13 Listens” bus tour in the 1990s, which traveled to different communities around the state to hear concerns of Hoosiers. Pictured, from left, are Dave Calabro, Anne Ryder (Stehr’s co-anchor at the time), John Stehr, Community Affairs director Lis Daily and Bob Gregory. (Submitted photo from the WTHR archives)

Stehr became a WTHR evening anchor in 1995 after leaving a job at CBS News in New York as a network correspondent and anchor for CBS Morning News.

Stehr has enjoyed the interaction of being tied to a community.

“You can fake anyone for a day, a week or short period of time,” Stehr said. “Over the long haul, people will see if you are being authentic or not. I just had to be who I am and people will like me or not. At our station, the relationships you see are real relationships. It’s a nice culture we’ve built and maintained.”

Morehead said she will miss Stehr’s sense of humor the most.

“For the past 19 years, his microphone check before the broadcasts has always been the same,  his impression of Ronald Reagan saying, ‘Well, I don’t know,’” Morehead said.

Personal: Pittsburgh native. Graduated from Gannon University in Erie, Pa., in 1980. Has five children, Morgan, Connor, Riley, Jeanie and Meredith. Married his wife, Amy, in 2003. Amy owns Sugar Shuga desserts. Moved to Zionsville when he started at WTHR-13 in 1995. Member of Zionsville Presbyterian Church. Starting to build a new home in the Village of Zionsville this summer.

Career: Started at Erie TV station while in college. Worked at Grand Rapids, Mich., and WISH-8, then a CBS affiliate, on a late-night news show in Indianapolis. Then went to a Salt Lake City TV station before going to New York as one of CNBC’s founding anchors. He joined CBS as a correspondent and served as anchor on CBS Morning News before joining WTHR.

Favorite thing about job: “I really enjoy the day-to-day coverage of things. I don’t think I’ve ever had a day where I felt there is nothing to talk about. The flow of information is always important.” One highlight was traveling with former Sen. Richard Lugar to Russia in 2002.

Favorite Zionsville activities: Walking with his dog, Johnny Cash, a labradoodle, on the trails. Riding bicycles on the trail with his youngest daughter, Meredith.