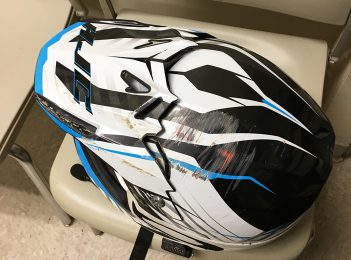 The helmet worn by Brian Romano, the Whitestown resident who crashed his Yamaha Raptor 700 June 11, shows scuff marks and cracking from the accident.

Whitestown resident Brian Romano, 35, was operating a Yamaha Raptor 700 on Albert S. White Drive when he lost control. He was thrown approximately 25 feet from the vehicle, at a speed that was later determined to be near 40 mph. The vehicle was not registered to be on the roadway.

Whitestown EMS transported Romano to St. Vincent Hospital in Indianapolis. Romano was wearing a helmet but sustained a broken femur.

Conservation officer Ryan McCauley said officers have been cracking down on operating ORVs without a helmet, and this is an example of where more injury could have occurred if Romano had not been wearing a helmet.

“We do see quite a few ORV crashes where further injury is caused because someone was not wearing a helmet,” McCauley said. “You can have blunt force trauma, which is a serious issue.”

Indiana law defines “off-road vehicle” as “a motor-driven vehicle capable of cross-country travel without benefit of a road, on or immediately over land, water, snow, ice, marsh, swampland, or other natural terrain.”

In July 2017, Indiana lawmakers passed a law making it a Class C violation for individuals under 18 to operate an ORV without a helmet.

“It’s getting warmer and kids are out of school. We know that people enjoy (all-terrain vehicles),” McCauley said. “There is a safe way to go about it.”