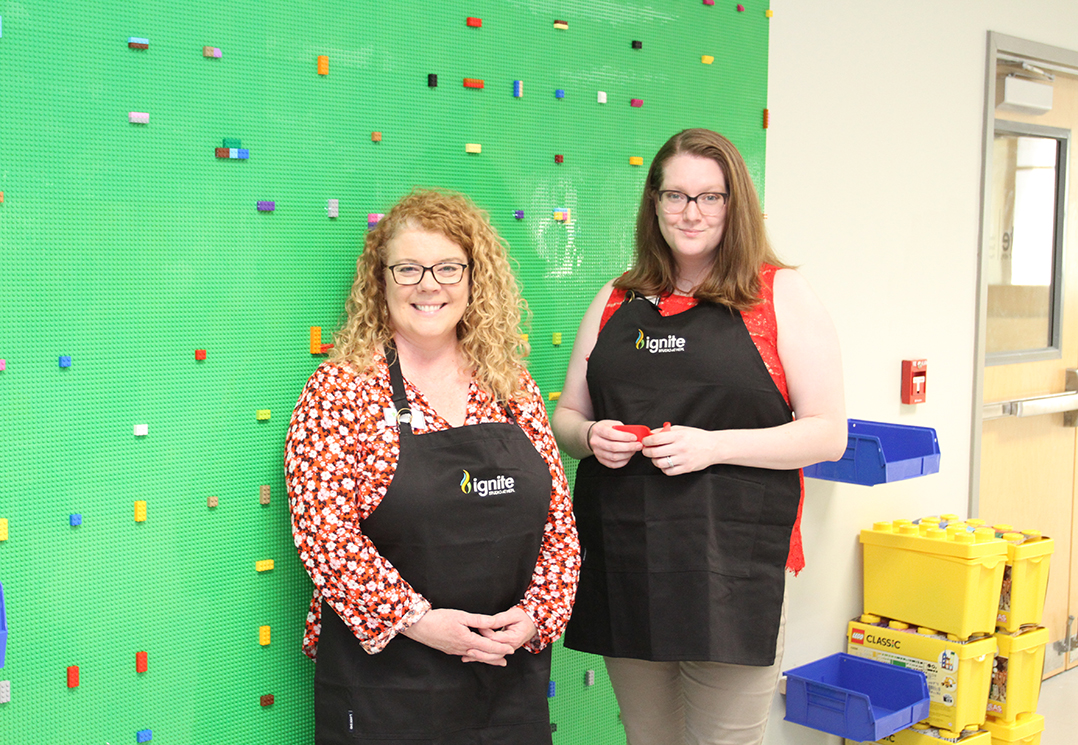 The Ignite Studio makerspace has been planned for four years. This summer, artisans can test their creativity levels within the makerspace. 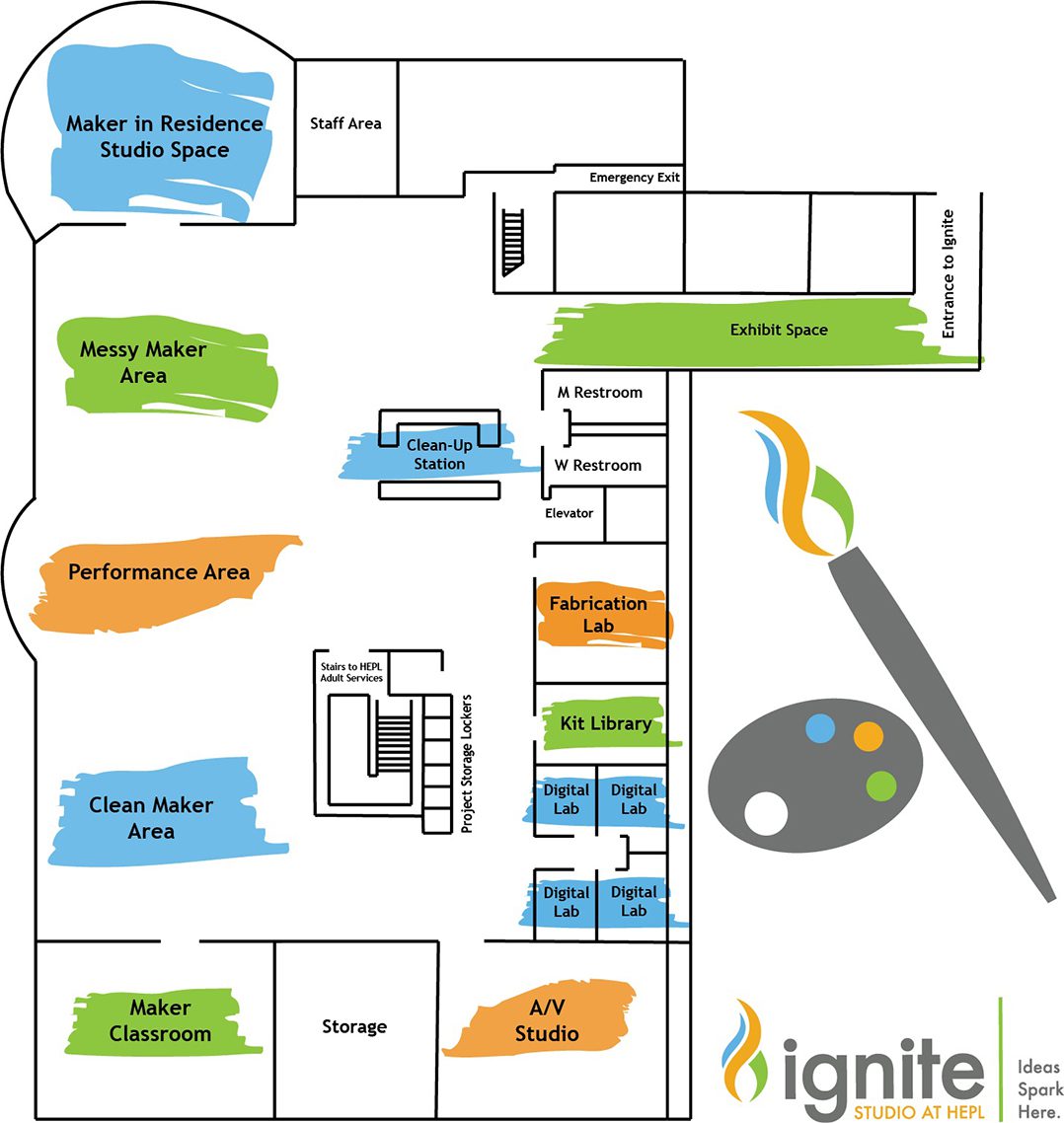 A floor plan of the Ignite Studio. (Submitted photo)

A versatile space to feature a maker-in-residence for 12 weeks, twice a year, and an emerging maker for six weeks twice a year.

“For the professional level, we are hoping to engage Hamilton County artists and really prioritize them as the base we want to pull from,” said Katelyn Coyne, Ignite Studio manager. “The emerging maker will be for students or young professionals or undergraduates or people in a master’s program. I think what we are going to see in this space in part is when art meets science.”

Makers will go through a juried process with their portfolio to be selected for the space.

There is an area designated for messier projects, like pottery, as well as a clean-up area which includes a washer, dryer, a rinse-out station and other commercial cleaning equipment.

“We want to try to help people learn to care for the materials and equipment as a way to introduce them to what that process is when you delve into that making,” Coyne said. “Part of creating is caring for your supplies.”

There also is a clean maker area, which covers projects like textiles. A performance area is designated for arts like poetry and theater.

The maker classroom is where the classes will be taught. In order to use certain equipment, makers must first take a free course. Also, when the maker-in-residence displays its work, it will be able to teach certain courses. Workshops also will be taught in this area.

The fabrication lab includes equipment where a maker is required to take a course to use availalbe items such two as 3-D printers, a vinyl cutter, a laser engraver and other tools. 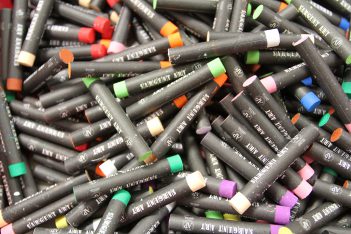 Ignite Studio’s goal is to have every art medium possible to work with. (Photo by Sadie Hunter)

Ignite Studio includes other areas, like an open play area where makers can dive into activities involving magnets, crayons or Legos. There are four digital labs where makers can access the Adobe Creative Cloud and complete post-production activities. An AV studio provides audio and video recording equipment, high-end cameras, a green screen and more. A kit library is a space where makers can check out kits, such as a watercolor for beginner’s kit, and bring home their art.

The Ignite Studio is included in an overall renovation of both HEPL libraries in Fishers and Noblesville. That entire project was $5 million. No additional taxes were levied for the renovations.

However, when Ignite Studio renovations were under way, HEPL Fishers was flooded in the winter when a main sprinkler pipe ruptured because of sub-zero temperatures. Fortunately, the Ignite Studio was not damaged. The damage, which was approximately $500,000, was covered by insurance. Damaged items included walls, flooring and the loss of some computers. Repairs are ongoing.

A soft opening for the studio is planned for the end of the month, and a grand opening is scheduled for July 21. For more, visit hepl.lib.in.us.

How to rescue a drowned book 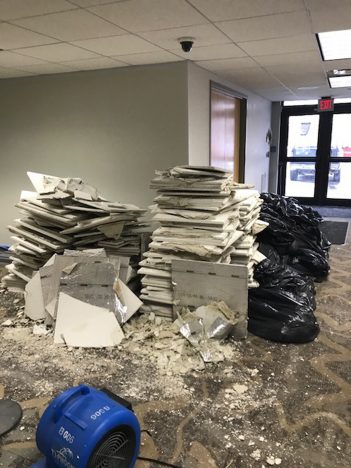 Although no books were damaged in the January flood at the Hamilton East Public Library in Fishers, Director Edra Waterman said if the books weren’t rare or historically important, they most likely would have been pitched. The historic Indiana Room is at the Noblesville library and not damaged.

However, Waterman said if drenched books were in need of saving, they would have been placed in a freezer to dry them out.

“If we had special collections or rare or local history, we would definitely try preservation for those,” she said. “We would lay everything out and dry it out. Part of the reason we don’t try to preserve a book that’s been water damaged, unless there’s a good reason, is the risk of mold.”