You are at:Home»Current in Zionsville»Zionsville Community»Column: Kellar Mahaney lives on in Exhibition (and in my heart)

They never die. That’s the thing about artists.

So it is with Zionsville’s great artist, Kellar Mahaney, known to us as Edie.  She died in November 2017 but lives on in the tremendous art she left behind. Do yourself a favor and get to the SullivanMunce Cultural Center before the exhibit ends June 23. Let your eyes and your soul feast upon the joyful celebration of color that is Edie’s legacy. 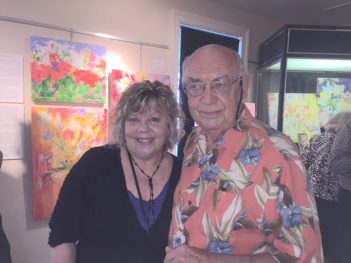 I’m lucky. I get to do that every day. Her painting, “Winter’s Promise,” hangs in my living room. She gifted me that original oil after I wrote a column celebrating her art and her golden wedding anniversary to her husband, Jack. It’s the most generous gift I’ve ever received, and I can’t tell you how much it means to me.

I met Edie in about 1980. She’d been hired as founding director of the Zionsville Munce Art Center (now the SullivanMunce Cultural Center). I did a story about her and the new art center. As I recall, I photographed her holding the keys to the place.

At that time, Edie personified the Village to me — where everybody knew everybody, and Main Street was where we all met. She told me she had a dream to someday have a studio and spend her time just painting.

Decades later, her husband Jack created a studio above their garage. Edie took her paints and her boombox upstairs. Joy ensued. Explosions of color caught the eye of artists and critics alike. Her work soared in acclaim and value (mine is not for sale). Soon, she had her studio on Main Street.

Her art was displayed in prestigious shows and won numerous awards.

What I remember most, though, is very personal. I used to write a column, “The Question of the Week.”  It was probably as hokey as it sounds, but it was extremely popular. Every week I went out with my camera and photographed six people and asked them the “question of the week.”

Readers didn’t know that before I left the house I sat down at my kitchen table and answered the question myself. One week the question was, “Who do you know   you’d like to be more like?”

My answer was “Edie Mahaney.” The reason was simple: Whenever I met Edie on the street, my day was better. Her hug was life-affirming.