You are at:Home»Current in Carmel»Carmel Community»Carmel mom’s late son honored at Chicago race

Mother’s Day was a memorable one for Melanie Thompson Smith this year.

The Carmel resident learned a few days before Mother’s Day that Drake Darrah was going to run in honor of her late son as part of the Flags 4 Fallen program. 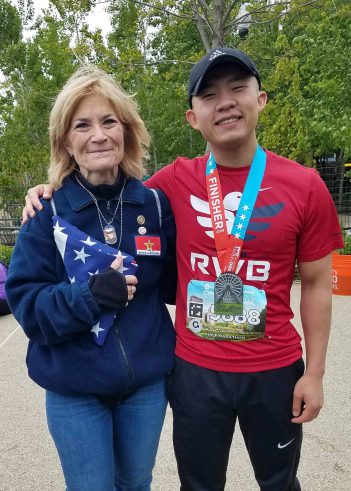 During the Byline Bank Chicago Spring Half Marathon & 10K in Grant Park May 20, Darrah, from the Chicago area, ran with the flag to honor Smith’s son, Marine Cpl. Lance Thompson. Thompson died at age 21 on Nov. 15, 2004, as a result of a truck bomb on his second tour of duty in Iraq.

“(Darrah) had Lance’s picture on his back,” Smith said.  “I can’t tell what an impact it had to meet Drake and his family, to learn about Drake and the things he and Lance had that were so similar. It was an emotional day. Drake’s mother said Drake had run many races for fallen soldiers and this was the first time a soldier’s family member had been at his race.”

Smith said Darrah told her he wanted to join the service when he was young but wasn’t able to do, so he runs to pay tribute to fallen soldiers.

Smith was joined by her sister, Melinda Stanley, at the race.

“We cheered for him when he came across the finish line. It was just really an awesome thing to see him carrying that flag across the line,” Smith said. “When they started folding the flag, it brought back so many memories because Lance loved the flag. He and his cousin, also a Marine, would fold family flags, and I have several pictures of them doing that.”

Smith has lived in Carmel since 2001 and worked as a special education teacher at Carmel High School from 2001 to 2013. She then taught for two years in Lawrence Township Schools before retiring. Thompson attended Eastbrook High School in Marion.