You are at:Home»Current in Carmel»Carmel Cover Stories»Building gateways: Motorists prepare for months of construction on Keystone at 96th, 146th streets 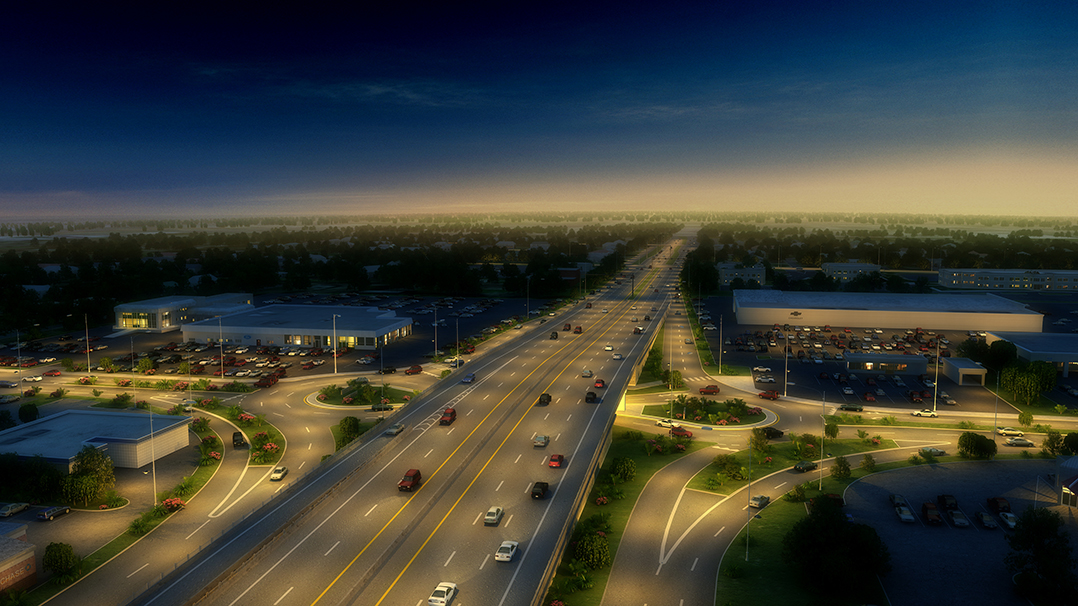 A northbound view of plans for 96th Street and Keystone Parkway. Construction began June 4 and will continue into 2019. (Submitted rendering)

Road construction season is off to a busy start in Carmel, as it has been the past several years. But this time the slate of projects includes major upgrades on the city’s north and south borders at Keystone Parkway, two areas motorists expect will cause traffic headaches during construction but bring major relief when complete.

Lane restrictions began June 4 on a City of Carmel project to transform the intersection of 96th Street and Keystone Parkway into a roundabout. In April, Hamilton County began work on a way for drivers to go south on Keystone Parkway from 146th Street.

City Engineer Jeremy Kashman said both projects are designed to improve the experience for people driving to and from Carmel.

“It’s always better as you’re coming into your city that people aren’t sitting and waiting,” Kashman said. “(These projects) will have some enhancements to the finishes and really make it look like a nice gateway into the city.”

Although the first visible signs of construction only showed up last week as crews began preliminary work to build ramps, city officials have been working tirelessly behind the scenes to prepare for the heavy construction coming soon at 96th Street and Keystone Parkway, which handles approximately 85,000 cars each day.

“It’s busy and it’s a main business area, so we don’t take that lightly,” Kashman said. “It’s a project we have to get built. We lost a lot of sleep over how to figure out how to make this thing go as smoothly as we can.”

When complete in 2019, Keystone Parkway will be elevated over 96th Street, much like the interchanges at US 31 and 106th and 116th streets. Commuters will be able to travel the entire length of Keystone Parkway in Carmel without having to stop for traffic lights. The project also includes constructing a roundabout at 96th Street and Haverstick Road.

The intersection’s transformation has been a city goal for a long time and was a focus of Carmel Mayor Jim Brainard’s 2015 campaign. The city council approved funding for the project among more than $200 million in bonds it approved in January 2016. In the summer of 2017, the city’s board of public works awarded a bid of $28.8 million to Rieth-Riley Construction to complete the project.

The city is using local County Option Income Tax bonds to pay for the construction. Other funding sources include $8.5 million from INDOT and $2 million from Hamilton County.

The project has experienced delays in moving utilities and obtaining land. Four buildings at the intersection will be demolished: the McDonalds/BP and Marathon gas stations and the vacant buildings that once housed Burger King and Chase Bank.

Kashman said the city has been working with landowners and affected business owners to make the project as painless as possible.

“We’re working through details, because each person has different things that are important to them,” he said. “It might be something nobody could have thought of, but you don’t do their business every day.”

Chris Pisano, who lives in downtown Carmel and works as a senior mortgage banker with MJW Financial at 86th Street and Keystone Avenue, said he began taking U.S. 31 to work the morning the closures began to avoid the bottleneck and create space for commuters who have little choice but to drive through the intersection to get to their offices.

“Be patient, leave early and understand that we’re all trying to get somewhere,” he said of dealing with the project. “Think of the end result and how much easier life will be once it’s done.”

City officials are proposing several detours around the project, including U.S. 31 and Hazel Dell, Gray and Allisonville roads. Traffic patterns will evolve as the project progresses, but there is no full closure of the intersection planned.

“There’s been so much work done in Carmel, it’s no longer a huge deal to do a project like this because there are so many (ways) to get around it,” he said. “That goes for any project in the city. There are at least five different ways to get around these projects.” 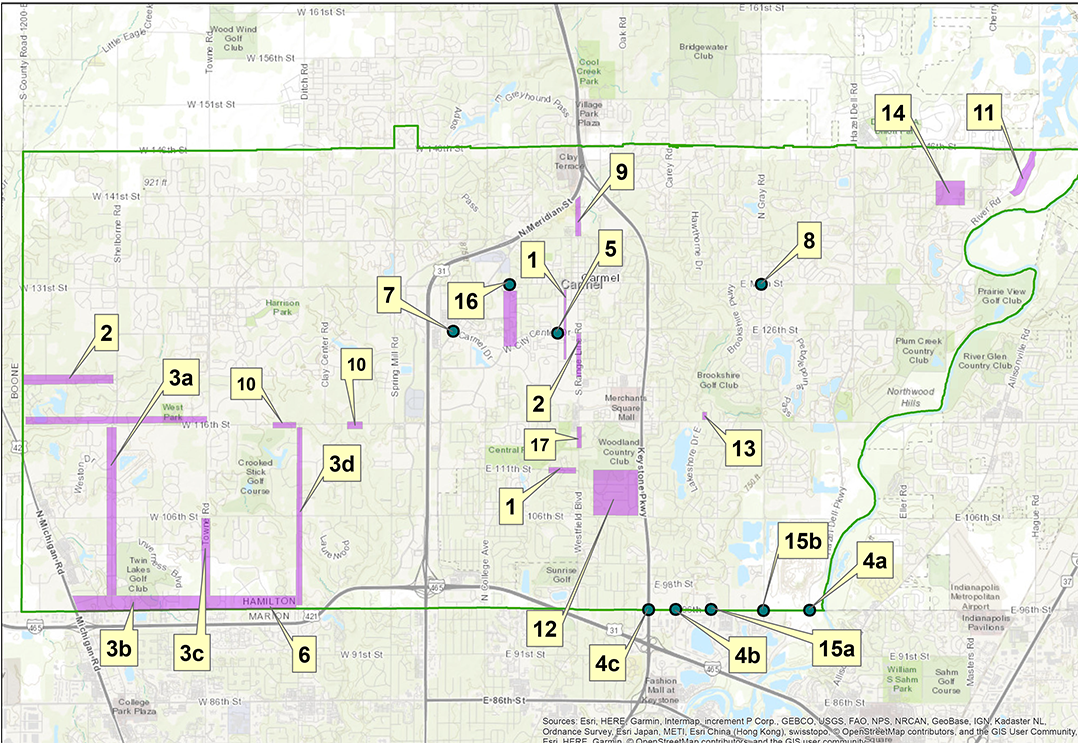 The City of Carmel has several road projects planned for the summer, although city leaders say the schedule is not as aggressive as previous years. (Submitted photo)

Other 96th Street projects under way

While the transformation of 96th Street and Keystone Parkway may be the City of Carmel’s biggest 2018 project, it is doing additional work on 96th Street east of the intersection to improve traffic flow along the corridor.

Construction has already begun on new roundabouts at Priority Way and Hazel Dell Parkway, which has led to partial closures of the intersections. Roundabouts will also be added at Gray Road and Delegates Row with construction expected to begin this fall.

The city also planned to switch all traffic on 96th Street to the south lanes from Keystone Parkway to just east of Priority Way June 11 for drainage improvements underneath the road.

These road projects are in addition to several others planned for the summer in Carmel, including reconstruction of Range Line Road, a new bridge and culvert on W. 116th St. and new roundabouts at Third Avenue SW and City Center Drive, Carmel Drive and Old Meridian Street and Gray Road and Main Street.

Carmel resident Chris Pisano, who lives in downtown and commutes to Keystone Avenue and 86th Street for work, said it’s “somewhat unfortunate” for drivers that the city is tackling so many projects at the same time.

“That makes it tough with it all going in at once, but the finished product is what we all want,” he said. “We all resist it, but when it’s done it’s great.”

Carmel Mayor Jim Brainard said the busy construction schedule – which he said is less aggressive than in previous years – is intentional.

“I believe it’s so much better for a business, particularly a small business, to have a compressed time when there’s construction in front of them than to have it drawn out. It’s going to be very intense while it’s going on,” he said. “What we try to do is to do it very quickly. Get in, get it done and get out.” 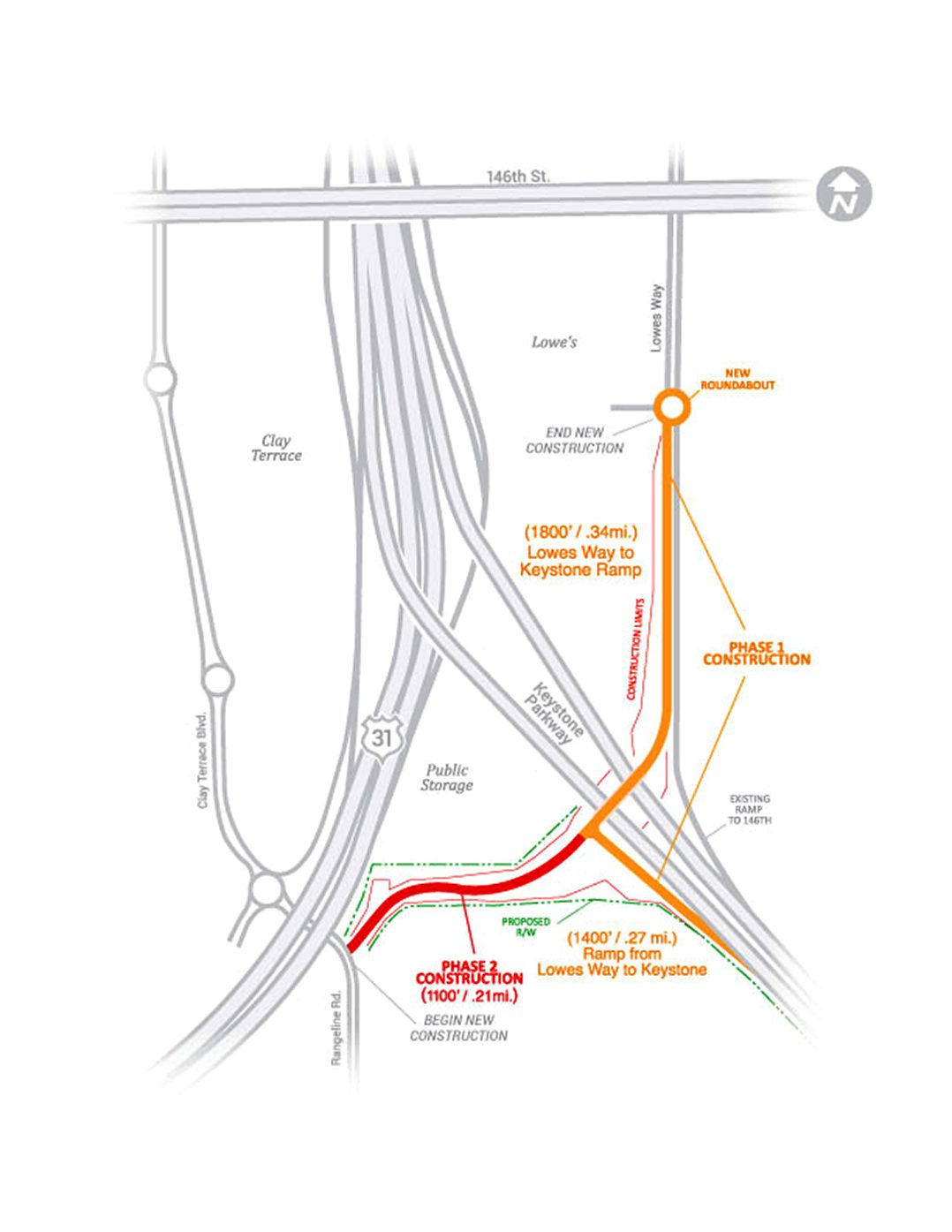 Hamilton County is constructing a ramp to allow drivers to go south on Keystone Parkway from 146th Street. (Submitted photo)

Long-awaited solution from 146th Street to southbound Keystone under way

It didn’t take long for Hamilton County Commissioner Mark Heirbrandt to find his mission as an elected official.

He remembers traveling southbound on Carey Road on his third morning in office when he saw a friend outside walking a dog. The man commented on the “ridiculous” traffic congestion in the neighborhood and surrounding area.

“I took my phone out, a Blackberry at the time, and I took a picture of the lineup of cars and how backed up it was,” said Heirbrandt, who lived in Carmel at the time but now resides in Westfield. “I sent the photo to (fellow commissioner) Christine Altman and told her, ‘We need to do something about this traffic congestion.’”

Five years later, work on the project to add a ramp from 146th Street to southbound Keystone Parkway and build a connector from the ramp to Range Line Road has begun. The two-phase, $16.9 million project broke ground in April and is expected to be complete in 2022.

“It’s one of the first projects I was really involved in and pushed to get done,” Heirbrandt said. “I think it’s going to be very rewarding to be able to see this thing all the way through.”

For many people who live, work or shop near 146th Street and Keystone Parkway, the lack of a southbound ramp doesn’t make a lot of sense.

Drivers wanting to head south on Keystone Parkway either head north to 151st Street so they can take U.S. 31 southbound to an exit for Keystone, cut through the pedestrian-heavy Clay Terrace shopping center or wind through residential areas near Carey Road, such as Foster Estates or Foster Grove.

Motorists previously had access to U.S. 31/Keystone Parkway in both directions via Greyhound Pass, but improvements to U.S. 31 between I-465 and SR38 eliminated that route.

It wasn’t always meant to be that way. When INDOT reconstructed US 31 between 2011 and 2015, original plans called for a ramp from 146th Street that would take motorists to southbound Keystone. But INDOT officials decided to remove it from the project.

“INDOT could not justify the cost of construction of this ramp because it was a local network benefit and not part of the overall benefit for traffic on U.S. 31,” said Lamar Holliday, INDOT media relations director for the Greenfield/East Central District.

With INDOT backing out, Heirbrandt decided Hamilton County needed to step in. Of the dozens of county projects he’s presented to Hamilton County residents, he said this one almost always has the most support. He said area residents first brought the need for the ramp to his attention, and they’ve improved the project with their feedback.

“When we had public hearings on this and really tried to educate a lot of the people about this project, there were a lot of ideas brought up from citizens who live there,” Hierbrandt said, listing nearby trail connections and a roundabout at Lowe’s Way as examples. “There were some good suggestions that we think have made the project even better.”

Phase I of the project will cost $10 million and add a half-mile elevated lane from 146th Street to southbound Keystone Parkway. Construction began in April and is expected to wrap up in late 2019. Federal funds from the Indianapolis Metropolitan Planning Organization will cover approximately 48 percent of the cost, with the county covering the rest with tax increment financing funds.

The second phase, which will cost $6.9 million, will extend Lowe’s Way to a new roundabout constructed by the City of Carmel at Range Line Road. Construction is expected to begin in 2019 and wrap up the following year.

Heirbrandt said county officials have met with some business owners in the area but they haven’t received a lot of feedback. The project doesn’t require land purchases that will lead to the closure or relocation of any businesses, and all affected roads are expected to remain open throughout the project.