You are at:Home»Current in Noblesville»Noblesville Community»Hopper to use pageant to share platform of creating SAFE home

As an advocate for foster care children, her platform of creating SAFE homes for children in the foster care system is a natural for Jessica Hopper as a Miss Indiana contestant. 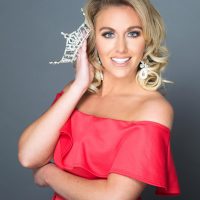 “The S is for stability for the children,” said Hopper, who has lived in Noblesville for two years. “The A is for allocation of resources in our state. The F is for family unit, understanding what a healthy family even looks like, whether it’s foster family or being reunited with the biological family, and E is for education of providers, child care workers and our foster parents.”

When she was 16, a pastor at Hopper’s church witnessed the poor relationship with her parents and suggested she move into a girls home. She saw a counselor who was able to convince her that the treatment was not normal.

“Being a child who experienced being told she could never be more than her past, or that she would never be nothing more than the abuse that had been inflicted on her, I have proved my abusers wrong,” Hopper said. “I am so thankful for what pageants have provided me. It has given me a chance to stand up for other children who have suffered from trauma and given me a family that will never leave my side and believes in what I can do.”

Hopper works for ResCare’s Youth Services program and qualified for Miss Indiana by winning the Miss Heart of the Midwest contest Feb. 24 in Indianapolis.

She was named Miss Indiana United States in 2017 and won the national Miss Congeniality. Those organizers encouraged her to try the other pageants.

Hopper, who turned 25 in April, was originally two months too old to compete for Miss Indiana but learned there might be an extension. In January, the group moved the age limit to 25, instead of 24, by the time of the Miss America pageant. But Hopper had to wait for the change to be official.

“So, I had five chances to win a title (to qualify), and I ended up winning on the fourth one,” Hopper said. “I got really lucky that they upped it just in time.”

Hopper, who grew up in Remington, was a psychology major and dance performance minor at Anderson University. She said she wants to earn her doctorate in clinical psychology for child development, specializing in trauma. The pageant platform earned her an invitation to speak to the Indiana Statehouse during Child Abuse Prevention Month in April.

The Miss Indiana pageant will be held from June 13-16 in Zionsville.