You are at:Home»Current in Zionsville»Zionsville Community»Eagle Scout candidate honors women who kept the home fires burning

A rendering of Freedom’s Fire at the Legion. Construction on the project was approved in May. The plaza will be dedicated on Mother’s Day of next year in commemoration of the 100th anniversary of the American Legion Auxiliary.

A candidate for the rank of Eagle Scout and Boy Scout Troop 358 member, Carter Sugar said he had always thought about building a new fireplace for the American Legion Post 79 as his Eagle Scout Service Project. Next year, his idea will become a reality. He has already begun leading construction on the project.

Sugar conceived and designed Freedom’s Fire at The Legion, a place to honor women who have served the community and the nation from the home front.

Freedom’s Fire at The Legion will consist of a raised plaza and ceremonial fire circle to honorably retire America flags. Freedom’s Fire will be dedicated to the women “who kept the home fires burning and assembly lines churning” in support of American troops on Mother’s Day of next year and also will commemorate the 100th anniversary year of the American Legion Auxiliary. Many of the women’s names will be engraved on the 1,000 bricks used to create the raised plaza. 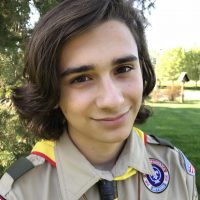 Carter Sugar is a candidate for the highest and rarest honor in Scouting, Eagle Scout. Sugar will lead construction on Freedom’s Fire at The Legion for his Eagle Scout Service Project.

Carter said his older brother, Jackson, created Memorial Plaza at the American Legion Post 79 for his Eagle Scout Service Project and he wanted to make sure his project also recognized the service of women, who didn’t directly serve in the military but helped on the home front.

“There’s a lot of women empowerment going on and I wanted to make sure they were recognized for their service to give women equal recognition,”  said Sugar, 15.

Freedom’s Fire at The Legion will consist of three engraved limestone reflection benches surrounding a masonry fire circle.The 19 feet by 19 feet measurements are in recognition of the year the American Legion Auxiliary was founded in 1919.

“While members of the Auxiliary have served selflessly for decades, we are deeply honored by this special recognition during our centennial year,” Rita Wilson, president of the Post 79 Auxiliary, stated in a press release. “Long before women were allowed to serve our country in uniform, grandmothers, mothers, aunts, sisters and daughters have nurtured and sustained the home front and we continue to do so today.”