What it means: The 5 1/2-acre project would be zoned under medium density near the Setters Run subdivision on Westfield’s southern border just north of 146th Street. Five people spoke on the matter at a May 7 APC meeting. Most were concerned with drainage and tree removal. Council member Robert Smith asked why the development was not designed around the existing trees. The developer said the site did not allow for much room in the backyard lining and promised to save as many trees as possible. The project is still in the preliminary phase. The proposal passed unanimously onto city council.

What happened: The APC sent a positive recommendation for Oak Ridge Pointe PUD district to the city council.

What it means: Also known as the Oak Ridge Shoppes, the developer, OnPointe Land Matters, LLC requested an amendment to allow for commercial development and a tenant building on 2.2 acres at the southside of Ind. 32. The developer said adjustments include architecture and landscaping. The item moves onto city council.

What happened: The APC held six public hearings on different items, including:

The Reserve on South – Two public hearings were held concerning the Reserve on South just to the north of South Street and to the west of Oak Road at 423 E. South St. The developer requested a primary plat and overall development for 13 single-family lots on 8 acres. The petitioner held a neighborhood meeting May 15. Homes would be high-end with prices ranging from $450,000 to $650,000. Debbie Bell, a resident of the neighborhood immediately north of the proposed site, was the only speaker. She said she was concerned about drainage from the existing retention pond that her home backs up to. She also said she was not aware of a neighborhood meeting. The developer said it will continue to work through certain aspects, including drainage and tree preservation.

D&W Farms at Grand Park Village – The 21-acre site is on the southwest of Wheeler Road and Grand Park Boulevard. The developer requested a primary plat and overall development plan review for two commercial lots. 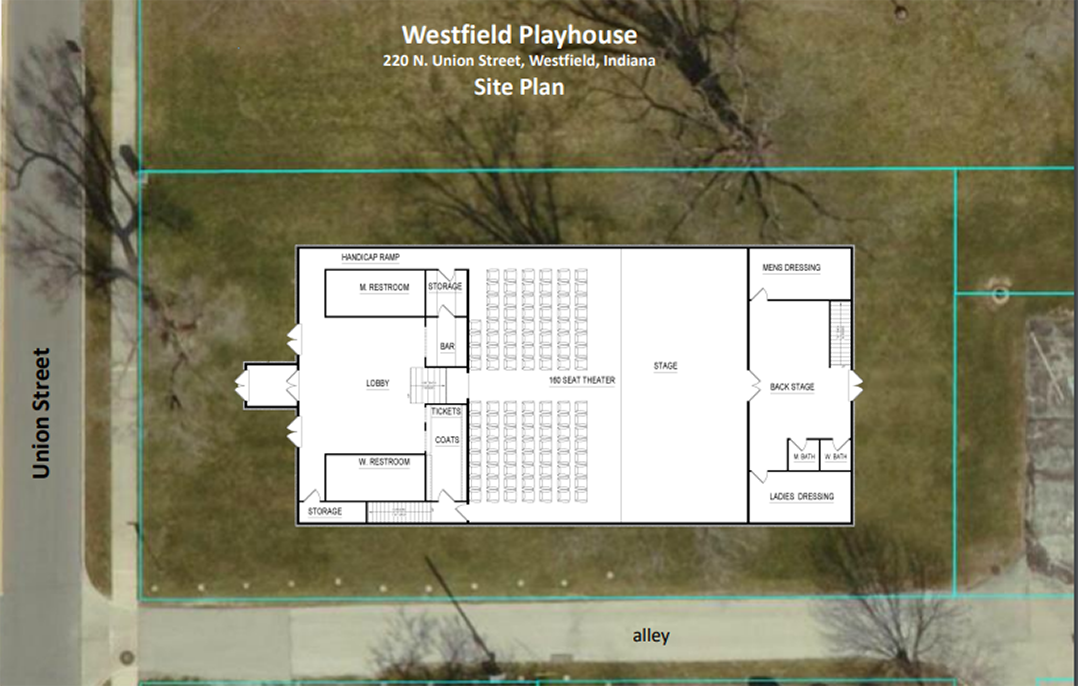 Westfield Playhouse PUD – Main Street Productions requested a change in zoning for a new theater in downtown Westfield at 220 N. Union St. The PUD would by default be incorporated into the city’s local business historic district. The theater has been housed at an old church in Eagletown since 2002. Craig Wood, member of the adjacent Christ United Methodist Church, was the only speaker.

“Primary concerns are parking that would be required and what the plans are for productions,” he said. “We occasionally have large events that utilize all our parking spots. Not that there would be any conflicts, but we are trying to be proactive.”

Tom Smith, who represented the playhouse board of directors, said it approached the church and met with leadership in March but could tell that they were hesitant.

“When we proposed this project, we did not plan on depending on them for parking,” Smith said. “We feel like streets around downtown Westfield and city lots behind the building are adequate.”

Smith said although the playhouse won’t be able to provide parking, it will honor restrictions in place when using nearby parking lots.

“We could restrict people from going on their (the church’s) space,” he said.

Grand Park PUD – The City of Westfield requested a change in zoning of approximately 399 acres at Grand Park.

Director of Economic and Community Development Matthew Skelton said the change is designed to set the framework for future approvals.

“It’s pretty simple,” he said. “It is designed to be amended with site specific proposals that could come forward later on.”

Skelton said the amendment would allow the city to sell additional lots that were not being used for Grand Park. He said ideally the amendment could have happened first before ProX and the Grand Park Events Center PUD’s were incorporated into the existing PUD.