You are at:Home»Current in Noblesville»Noblesville Cover Stories»Time for healing: Community comes together after West Middle School shooting 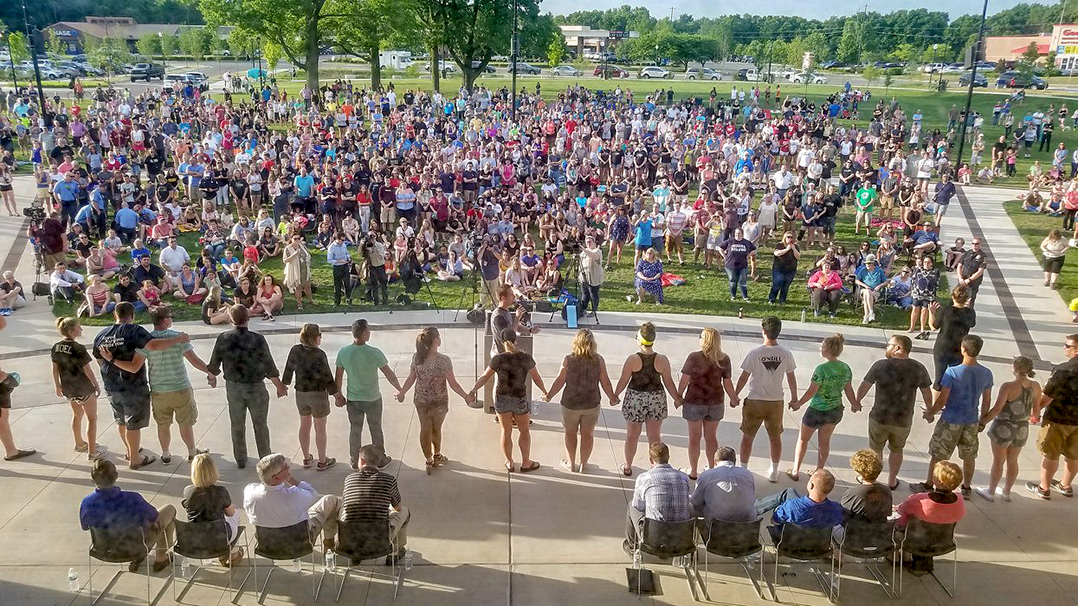 The May 26 community prayer vigil drew hundreds to the lawn at Federal Hill Commons. (Submitted photo)

The Noblesville community is recovering after the recent shooting at Noblesville West Middle School, something many have said they never thought would happen here.

In the days since the incident, thousands attended a prayer vigil, showed an outpouring of support on social media and donated money to the victims – seventh-grade student Ella Whistler, 13, and seventh-grade science teacher Jason Seaman, 29.

Both were shot on the morning of May 25 after a student in Seaman’s class asked to be excused from the classroom, returned with two handguns and began shooting. 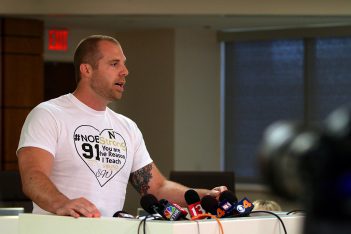 Shooting victim Jason Seaman speaks publicly for the first time since the shooting at the Noblesville Schools Educational Services Center during a May 28 press conference. (Photo by Sadie Hunter)

Seaman, who has taught at NWMS for four years, is being hailed as a hero and credited for saving many lives for his quick response to take down the shooter. Seaman was shot three times – once in the abdomen, once in the hip and once in the forearm.

Seaman spoke publicly for the first time since the incident at a May 28 press conference, where he thanked his colleagues and school resource officer Michael Steffen, along with the medical staff at IU Methodist Hospital and Jackson Ramey, who started an online fundraising page for Seaman’s medical expenses. He also thanked the entire Noblesville community.

“First off, as a person who isn’t looking for attention, nor entirely comfortable with the situation I am currently in, I want to make it clear that my actions on that day, in my mind, were the only acceptable actions I could have done, given the circumstances,” Seaman said. “I deeply care for my students and their well-being, so that is why I did what I did that day. The last couple of days I’ve heard story after story of how members of the Noblesville West family conducted themselves that day, and I couldn’t say how proud I am of how they conduct themselves around students given their own emotions. I can’t say how proud I am of Ella and how we all should be. Her courage and strength at such a young age is remarkable, and we should all continue to keep her in our minds. I’m still processing much of what happened, but I can say with absolute certainty that I am proud to be a Miller.”

Seaman was released from the hospital one day after the shooting. Whistler is recovering and was still in the hospital as of press time. 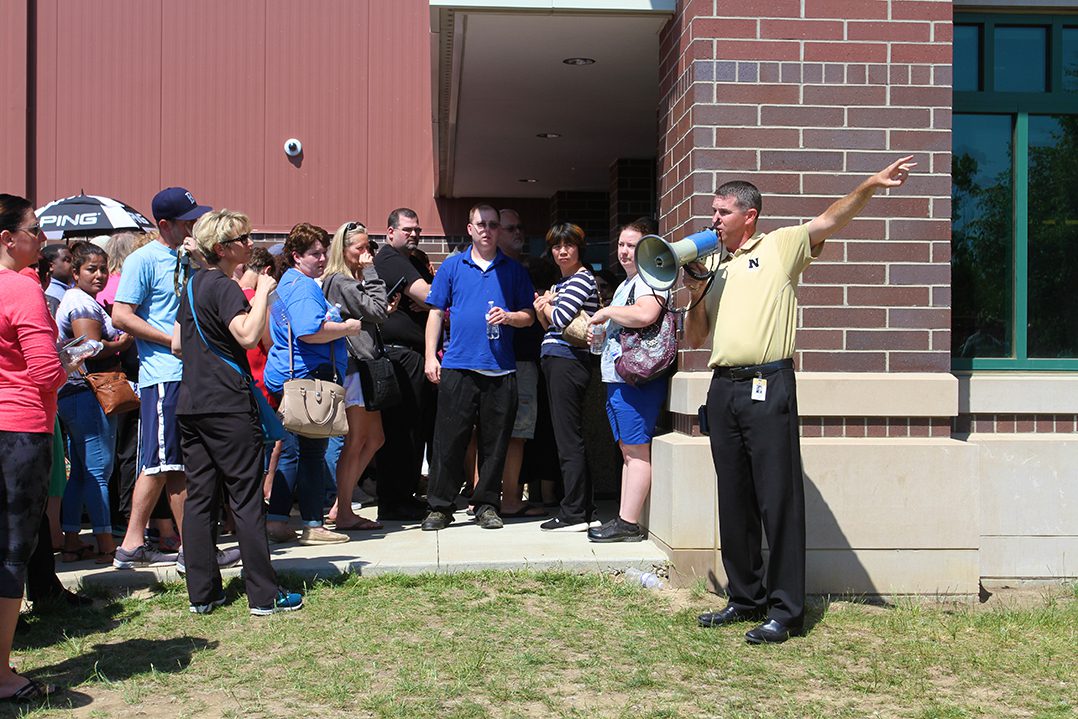 Noblesville High School Principal Jeff Bryant directs parents May 25 at the high school. West Middle School students were bused to the high school and reunited with parents after that morning’s shooting. (Photo by Sadie Hunter)

“On Friday (May 25), we endured a horrific and senseless tragedy that had significant impact on this community, but we’re coming together to support one another in this time of need,” Noblesville Schools Supt. Beth Niedermeyer said. “I see tremendous kindness, strength and resilience from this community, and we’re all grateful. I’m thankful that Jason, the teacher who was injured, is well enough to be here with us today. Ella, our student who is injured, is making progress, and she is surrounded with loving family, friends and a huge circle of well wishers. These last few days we’ve been working to tend to the emotional needs of our students, staff and parents. We’ve been providing counseling services. These counseling services will continue the rest of this week, this summer and into next year. That’s an important part of the healing process. The outpouring of love and support that we’ve received from this community, state and the nation has been a source of strength, and we are slowly starting to heal.”

Students and staff of the district’s nine other schools returned to class May 29. Students and staff of NWMS did not return before the last day before summer break, June 1, and the school only was open to offer counseling to NWMS students, parents and staff. Noblesville High School’s graduation ceremony, scheduled for 7 p.m. June 5, was unchanged.

“This community and (NWMS) will be forever changed by the events that happened on (May 25). We are eternally bonded in this,” NWMS Principal Stacy Swan said. “I want everyone to know the examples of strength, courage and bravery I witnessed on this morning. I have never felt alone in Noblesville, but never has it felt so beautifully crowded than on that day.” 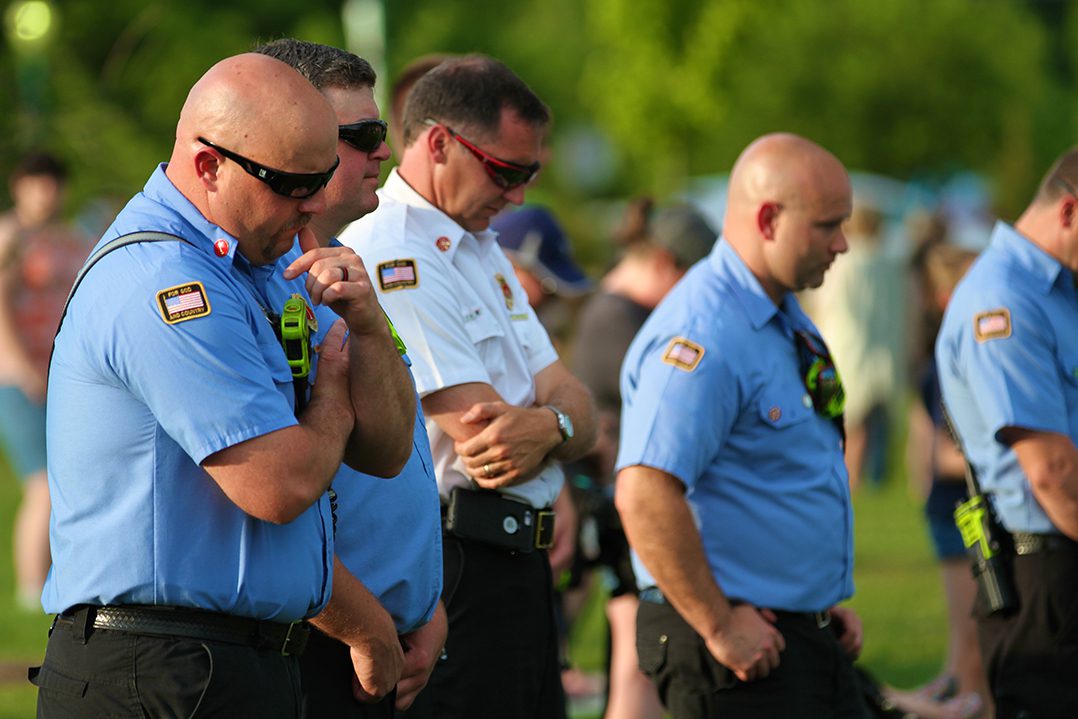 Noblesville firefighters pray during the May 26 vigil at Federal Hill Commons. (Photo by Sadie Hunter)

“Words are hard to express about the event that occurred (May 25) at Noblesville West Middle School. School shootings are a tragedy regardless of the location, but having one unfold in your community is heartbreaking and shocking. (This) was a harsh reminder that no matter how hard we try to keep our children safe, we must prepare for the worst conditions. Lives were saved by the courageous actions of our first responders and NWMS staff. I could not have been prouder of their bravery.”

“As we move forward in the days and weeks to come, and embark upon a healing process, it is important to continue prayers and efforts to support Jason Seaman, injured student Ella Whistler, all students, teachers and administrators of the Noblesville school district, their families, as well as the first responders who responded swiftly to a horrific scene. I encourage people to reach out to mental health professionals to learn how to cope and process what happened and how to best support their children, family members or friends who may be struggling. This will be a complex matter to process as a community, but Noblesville is a strong and resilient city. We are on this journey together.”

“We stand united with Noblesville, and my focus is on the student and teacher who were injured, as well as everyone impacted by (this) heartbreaking shooting: the students and their families, the teachers and the Noblesville Schools administration. I’m inspired by the selflessness and heroism of Noblesville West Middle School teacher Jason Seaman. Our teachers, staff and administrators are extraordinary.”

“As someone who grew up in this county, who attended public schools here in Indiana, and who still has young students in my own family attending schools here – I’m saddened and deeply troubled by this tragedy. It is unclear what motivates a young person to engage in such senseless violence, but we owe it to our children to find out. We must resolve to work together on this, to better understand this tragedy so that we can take lawful and effective measures to prevent this from happening again. Our children deserve no less.”

After May 25’s shooting at Noblesville West Middle School, the Noblesville Schools district had increased police presence at all of its schools when students returned.

West Middle School students returned one day after students in the district’s nine other schools, and staff welcomed them with inspirational messages and more.

Operating on a reduced, two-hour delay schedule for final week of classes before summer break, students were greeted by counselors, principals and teachers. Elementary counselors and principals also were on site as familiar faces to former students. In addition, principals from Westfield Washington Schools, Hamilton Heights Community School Corp. and Carmel Clay Schools were there to offer additional support and to greet students. More than 50 counselors remained at West Middle School during the week for support.

Regular classes did not resume. Instead, students had the opportunity to talk with counselors and take place in therapeutic art projects and team-building exercises.

Police and the Hamilton County Prosecutor’s Office have released little information about the ongoing investigation into the alleged shooter, whose identity has not been released to the public because he is a minor. 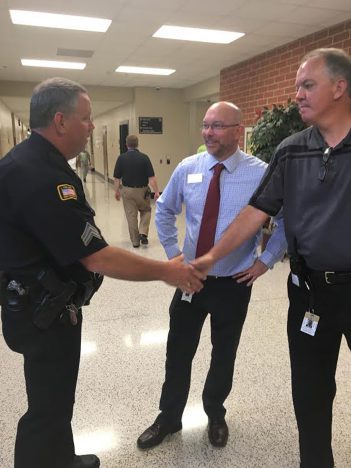 Although his age has not been confirmed, it could play a significant part in how he is prosecuted.

If he’s 13 years old, all charges will go through juvenile court, with the exception of a murder charge, which could be moved to adult court, but that does not apply in this case since both victims survived the shooting.

If the he’s 14 years old, charges have the chance of going through adult court. In Indiana, minors can be tried in adult court until they turn 21.

The alleged shooter appeared in court May 29. The hearing was closed to the public.

Hamilton County Prosecutor D. Lee Buckingham said further details of the incident, including information about the alleged shooter, would not be disclosed until a juvenile delinquency petition is filed.