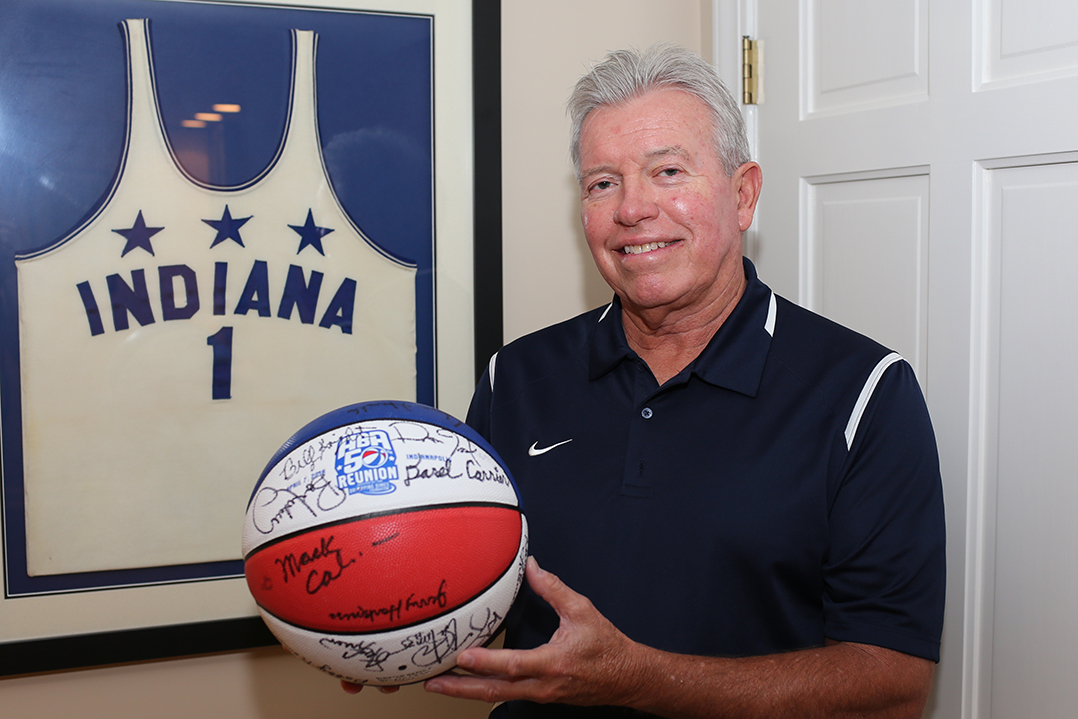 Billy Shepherd pauses in his Carmel home near the jersey he wore as 1968 Indiana Mr. Basketball for the Indiana All-Stars. (Photo by Ann Marie Shambaugh)

Billy Shepherd figures there is good reason to keep this basketball in a glass case.

“It’s still hot,” he said with an impish grin.

As a Carmel High School senior, Shepherd used that ball to score 70 points against Brownsburg on Jan. 6, 1968.

“My claim to fame is that night, because we got 88 points,” younger brother David Shepherd said. “Billy outscored Brownsburg by himself by one point.”

As the Indiana All-Stars prepare to face Kentucky June 8-9, it marks the 50th year since Billy Shepherd wore the No. 1 jersey as Indiana Mr. Basketball.

Two years later, David would become the only other CHS player to win the award, yet David still calls his older brother his hero.

The inference is that Shepherd has always lived a charmed life.

“We hated him at Southport because back then they were in the headlines every week,” said Miller, a Southport High School basketball manager at the time. “Our coach, Blackie Braden, always said it’s a good thing we don’t play Carmel, because the Shepherd boys could beat our starting five by themselves.”

Miller saw Shepherd in a different light when he started covering him at Butler while working as a sportswriter at the Indianapolis Star.

“What people don’t realize about Shep is he had Reggie Miller range,” Miller said. “He was an amazing long-range shooter and he was a fabulous passer.”

“That was special, because we knew going in he had to retire because of mandatory retirement age,” said Shepherd, who lives in Carmel with his wife, Connie.

“Wilt liked me and I became a starter,” Shepherd said. “That was my best year, statistics-wise. My whole pro career I was more of a playmaker than I was a scorer.”

He led the ABA in 3-point percentage at 42 percent in his final season with Memphis in 1974-75. However, Memphis folded and the league was shrinking and would last only one more season before merging with the NBA.

“Converse approached me about selling shoes for them, and the state of Indiana was open,” Shepherd said. “I figured if the ABA was going down I was going to have to get a real job, anyway.”

After seven years, he sold real estate and then private mortgage insurance. In 2000, he formed Billy Shepherd Sports and did consulting, writing and coached several AAU teams. He had two stints as a high school coach.

“Not many coaches can say they coached at Muncie Central and Marion, probably the two biggest powerhouses in the state,” Shepherd said.

He took over at Muncie Central in 2003 when coach Bill Harrell resigned under an Indiana High School Athletic Association probe into violations.

“I knew it was going to be a one-year deal,” Shepherd said. “We won 20 games and got beat in the regionals.”

Shepherd took over as Marion coach in 2011.

“I knew it was going to be just a two-year deal,” Shepherd said. “I enjoy the coaching. It was a way to give back something to the game.”

Shepherd served as a teacher by example for David.

“He was the idol in town, and just hanging around and competing with him was humongous for me,” said David, founder of Shepherd Insurance. “I couldn’t wait for the day we got to play together when I was a sophomore, mainly because he usually had two guys guarding him and that left me wide open. I learned what he was going through my last two seasons.”

Through the years, Shepherd’s competitive juices have been stoked on the golf course.

The Shepherds played for their father, Bill Shepherd Sr., who coached at Carmel High School and served as athletic director. His 1970 team was state runner-up. 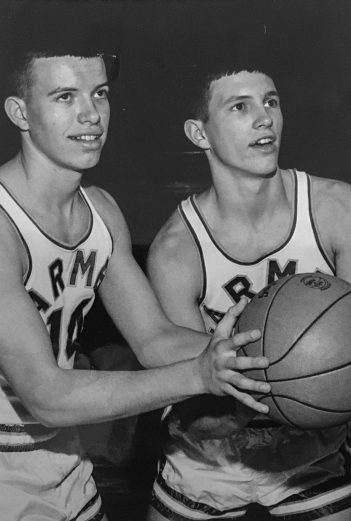 “We had a great run,” said Bill Sr., who was the athletic director from 1960 until retiring in 1992. “It’s nice to think what we were able to do to build a prestigious program.”

Bill Sr., 90, was a 1945 Indiana All-Star at Hope High School before playing for Hinkle at Butler. Bill Sr.’s youngest son, Steve, played on CHS’s first state basketball championship team as a sophomore in 1977 and played at the University of Indianapolis.

The Shepherds are the only family with three generations of Indiana All-Stars. Billy Shepherd’s son, Scott, was a 1992 All-Star who played at Florida State. His youngest son, Jeff, played at CHS and scored more than 2,500 points at Huntington University.

David played one season for Indiana University, Bob Knight’s first season as coach, before transferring to the University of Mississippi for his final two seasons.

Personal: Earned school record 15 varsity letters at CHS, four each in basketball, baseball, cross country and three in track and field. Carmel won its first basketball sectional in 41 years his sophomore year, the first of five in a row under coach Bill Sr. Averaged 26.5 points for prep career. “To still be in the top 10 in scoring without the 3-pointer after 50 years, I would never thought that in my wildest dreams,” Shepherd said. Threw three no-hitters, including a perfect game, for the CHS baseball team. Has four children, Scott, 45, San Diego; Jeff, 42, Carmel; Dena London, 39, Carmel; and Karli Midla, 30, Indianapolis. Has 10 grandchildren.