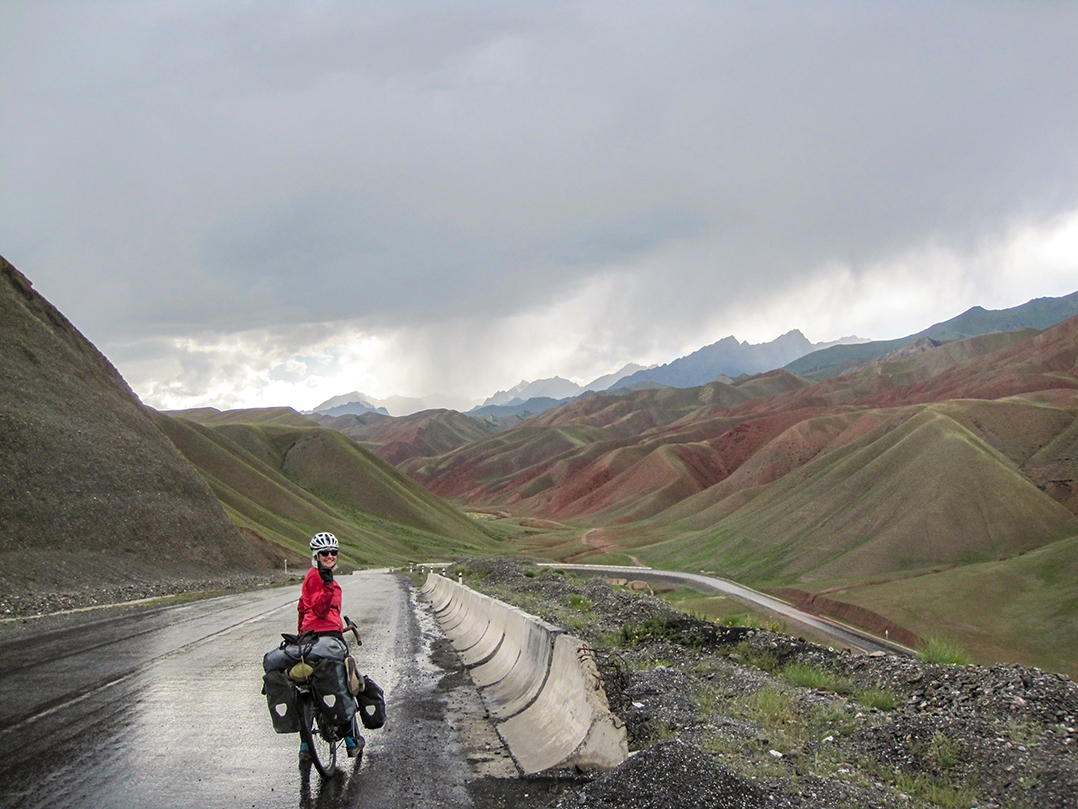 Carmel resident Melinda Balchan, who will co-lead a cross-country charity bicycle ride in June, has spent the past three years cycling across Europe, Asia and North America. Here, she pauses during a ride in Kyrgyzstan. (Submitted photo).

Had Melinda Balchan not joined a sorority at Indiana University, she would never have become a globe-pedaling bicyclist.

“I started cycling in college as a participant in the Little 500. I was in a sorority that competed in the Little 500 race,” Balchan said. “I was a runner prior to that, and my intention was to dabble in cycling so that I could start competing in triathlons.”

Suffice it to say, Balchan no longer dabbles in cycling. She lives it.

A 29-year-old Carmel resident, Balchan has spent the past three years bicycling across Europe, Asia and North America. She has logged more than 20,000 miles and is about to add 4,000 more, this time for a charitable cause.

Beginning June 7, Balchan will co-lead a team of 29 young adults on a cross-country cycling trek from Portsmouth, N.H. to Bellingham, Wash. The group is fundraising for Bike & Build, a national nonprofit that raises money and awareness for affordable housing.

“I’ve had a few friends participate in Bike & Build who have nothing but positive things to say about the organization,” said Balchan, who left a job with Dow Agrosciences in 2015 to pursue cycling. “It’s been something that’s been in the back of my mind for several years and is the first full summer that I’ve had in the United States since I first seriously considered doing a Bike & Build trip.

“As a seasoned solo cyclist, I’m picky about any organization with whom I would want to lead a tour, and I’ve often joked that I’d never ride across the United States without a good reason.”

During the journey, Balchan and her team will participate in several volunteer “build days” with a dozen different housing organizations, including Habitat for Humanity and Rebuilding Together.

Although Bike & Build assists with much of the logistics for the 2 1/2-month trek, which concludes Aug. 24 in Bellingham, Balkan is attempting to fundraise at least $5,000 to support the trip. Anyone interested in donating can visit classy.org/fundraiser/1264659 or maile a check to Bike & Build and write “Melinda Balchan” in the memo.

Riders on Balchan’s team range in age from 18 to 26. They expect to cover about 70 miles a day.

“As part of their commitment to Bike & Build, each cyclist and leader commits to fundraising at least $5,000 to support the work we’re doing on this trip,” Balchan said. “We work very hard to keep our costs low so that the bulk of this money can go directly to grants for affordable housing organizations in the communities that we’re biking through and volunteering with.”