Unlike most of her teammates, Tomi Taiwo didn’t dream of being an Indiana Girls All-Star.

“I moved from Minnesota to Homestead (in Fort Wayne) the summer after my freshman year and then moved to Carmel High School before my junior year,” Taiwo said. 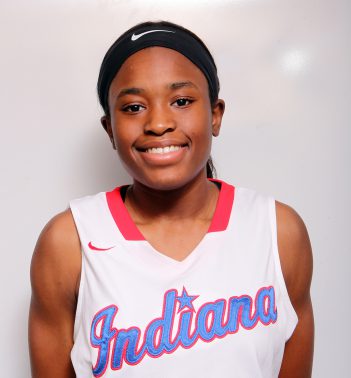 Now that the 5-foot-10 guard is here, she is honored to be a member of the Indiana Girls All-Star team, which will play Kentucky at Bellarmine University in Louisville June 8 and again at Bankers Life Fieldhouse in Indianapolis June 9. The senior girls will play the state’s Junior All-Stars June 6 in New Albany.

“I’m blessed and thank God for this opportunity to play with the best girls in the state and against the best in Kentucky,” said Taiwo, who will play for Iowa next season.

Taiwo is joined by CHS teammate Amy Dilk, Indiana’s Miss Basketball, who will play for Michigan next season.

“It’s going to be nice to have her as a teammate one final time,” Taiwo said. “I’ve gotten to know a lot of the girls from AAU and high school basketball and Top 60 workouts.”

The competition is more intense in Indiana than Minnesota, Taiwo said.

“I want to work on getting my shot off the dribble quicker and making sure me and my teammates all gel together,” said Taiwo, who will leave for Iowa June 10.

Taiwo averaged 16.4 points for the Greyhounds (24-3) last season and shot 41 percent from 3-point range and 90 percent from the free throw line.

“She is a dynamic player, athletic,” Indiana Girls All-Stars coach Pat McKee said. “Tomi is the rare combination of scorer and shooter. She finds ways to get to the rim and put the ball in the basket in situations where few can, and she also can spot up and shoot the 3 with the best of them. Her athletic ability and basketball IQ also allow her to be a strong defensive player.”

Taiwo was a supporter of CHS coach Tod Windlan, who was dismissed following the season in a controversial decision.

“I have so many great memories of him and I was so glad to have him as a coach,” Taiwo said. “(Windlan) told me Indiana All-Stars is a big thing, so I thank him for putting me on the stage to do that.”