You are at:Home»Current in Carmel»Carmel Community»Showing a San Franciscan around Carmel

Like many Carmel citizens, I consider my city fun, safe and exciting, even if it isn’t nationally famous as such. But what would a person from a hip, metropolitan city think of little ol’ Carmel, Indiana? I recently got the chance to find out when my friend, Larissa Sobon,  of San Francisco stopped by for a visit. 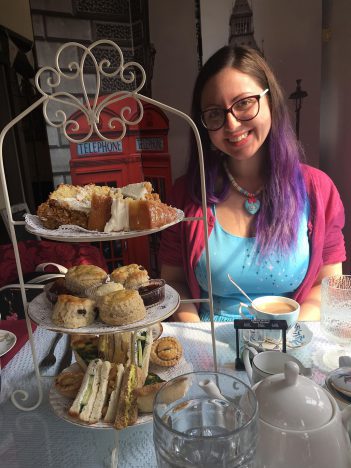 San Francisco has a reputation as one of the coolest cities in the world. As a designer working at Giraux Fine Jewelry near downtown San Francisco, Larissa routinely enjoys all the scenery, shopping, fine dining and other amenities her city has to offer. I was therefore excited to introduce her to my favorite Carmel shops and restaurants and take her for a stroll down the Monon, in spite of the unseasonably cool spring weather.

At Silver in the City, Larissa bought a quirky, unicorn-shaped planter. At Mudbugs Café, she enjoyed a chicken po’ boy and tried hushpuppies for the first time. But this hip San Franciscan’s favorite Carmel meal was the high tea at Tina’s Traditional English Tea Room, which included a variety of baked goods.

“The Victoria sponge cake, along with the Earl Grey tea scone with the clotted cream and raspberry jam were so good,” Larissa told me when recounting her trip. She also admitted the cherry ice cream she had at Sub Zero Nitrogen Ice Cream was a close second.

“It’s like a Norman Rockwell painting,” Larissa told me as we strolled through the Arts & Design District. “It feels like an idealized Main Street, like if you combined all the best places from Massachusetts, Vermont. It feels very East Coast.”

As certain as I’ve always felt that Carmel is a hidden Midwestern gem, it still feels good to have an official, California seal of approval. Thanks, Larissa!

Maria Cook is a Carmel resident and reporter for Current in Carmel.