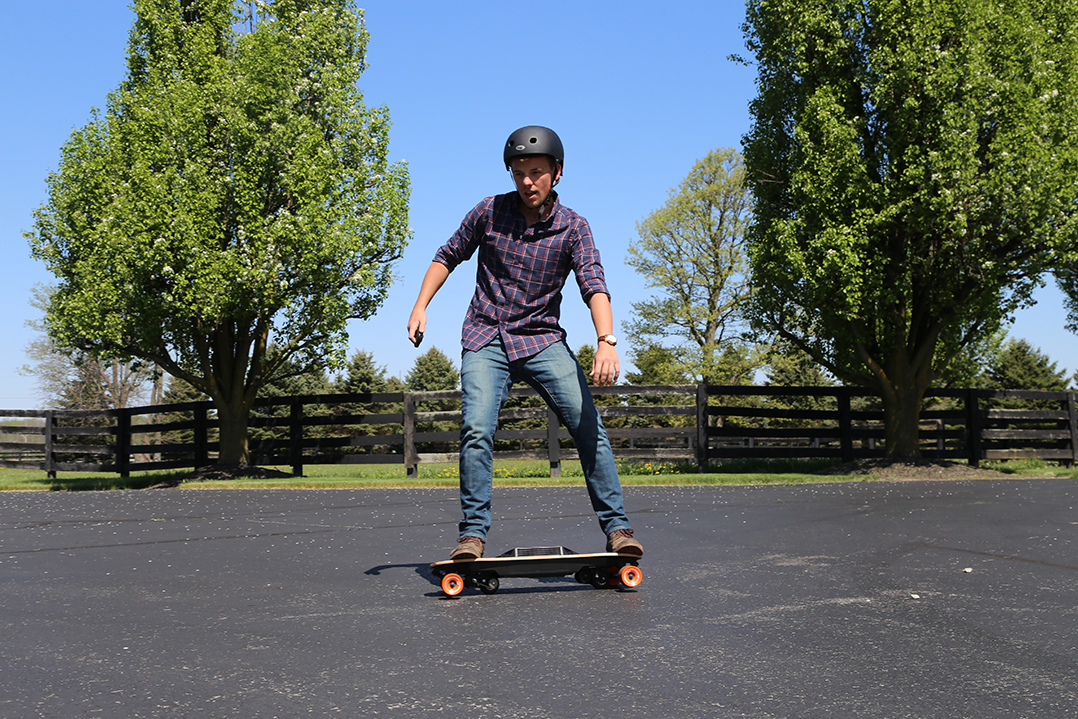 Evan Williams Jr. has been on quite a ride since his days at Zionsville Community High School.

His knowledge and experience with electric rideables had him developing a hoverboard, a self-balancing rideable, for a Mark Cuban company in Dallas to working with electronic snowboards for a Los Angeles-based company.

“As a physics teacher, I’m fortunate to have lots of smart students come through my classes,” Mullholland said. “What distinguished E.J. is his ability to create and problem solve. He was always kind of ahead of his time in thinking of new ways to do things, and that’s what sets him apart. He’s intelligent and extremely creative. He’s always thinking about things from a perspective that is different from how most of us view the world.”

Williams realized he wanted a greater challenge after serving internships with Allison Transmission in Indianapolis and Tesla Motors in Palo Alto, Calif., working on a powertrain control system.

“Even that was a little too corporate for me,” Williams said of Tesla. “I think whatever position I took had to be more well-rounded in terms of technical, in terms of marketing and a bigger picture.”

Williams went three months without a job after graduating from Purdue in 2015.

“Two days after graduating, I went to Europe for a month because I didn’t have an opportunity in school because I was too busy,” Williams said. 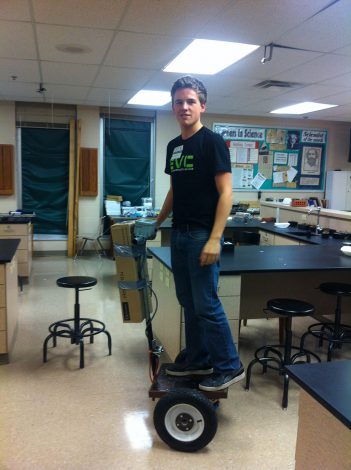 E.J. Williams rides a self- balancing “Zegway” he built while a student at Zionsville Community High School. (Submitted photo)

When he returned, he received an email from Cuban asking what he was working on. Williams’ father, Evan, had been teammates with Cuban on Indiana University’s rugby club team. The elder Williams was an investor in Cuban’s Motley’s Pub in Bloomington, and they had kept in contact over the years.

“It was lucky on my part and lucky on his part because he wanted to get into those hoverboards, and I was very well-versed in that technology as far as self-balancing because of that Segway project as a senior in high school,” said Williams, who received a $3,000 grant from the Zionsville Education Foundation to work on a Segway project.  “I had the years of self-balancing and I had the powertrain experience through working with electric go-karts at Purdue and Tesla, so the hoverboard was the perfect product for me to work on.”

Williams spent two-plus years in Dallas working with another engineer to develop the product, MOOV, as a Radical Transport employee.

“The experience of making it was awesome,” Williams said. “We launched it on Kickstarter and it did pretty well. There were a few hiccups. There was a patent that was becoming a hiccup, and turning the company from development to sales was taking longer than expected.”

Williams said he left on good terms with Cuban, who will have to decide if he wants to market the product.

“(In 2017), 10 of us were in the Dallas St. Patrick’s Day Parade riding them,” Williams said. “It’s really like nothing else on the market because it’s got a solid platform. It’s an interesting combination of recreation and transportation.”

“Virtually all of what Mark has done in the last 10 years has been investments,” Williams said. “He actively managed us, so that was neat.”

Williams, 25, started engineering consulting in November and returned to central Indiana in February with his girlfriend, Rachel Terrell.

A Facebook commenter on a story about Radical Transport suggested Williams and 2000 ZCHS graduate Aaron Aders, chief executive officer of Leiftech, connect because Aders was in a similar field.

“They have a cool product and I reached out to him,” Williams said. “Within 20 minutes we’re talking on the phone, so I started working with Leiftech to rebuild their firmware and electronics for the e-snowboard. It’s a land snowboard that is electric. And they’re doing amazing as a company with great growth. It’s crazy that two Zionsville grads happened to invent and build something in this space within the same couple of years. They had a huge need for electronics engineers with a focus in electric rideables.”

Williams served as a Leiftech consultant and wants to do more consulting with the company in the future.

In addition, Williams is a part-time staffer at Purdue, working with its Motorsports/MSTEM (Science, Technology, Engineering, Math) initiative.

Williams, who worked with the evGrand Prix program at Purdue, is serving as the evGrand Prix development adviser. The evGrand Prix, a competitive electric go-kart race, was held May 15 at Indianapolis Motor Speedway with high school teams and May 16 at IMS with college teams. Williams personally helped some teams get started.

“I would like to teach an electrical and autonomous vehicles class at Purdue, which I kind of did when I was a student there,” Williams said.

Evan Williams’ third part-time job is a bit different. He is helping his girlfriend’s father and Noblesville resident Doug Terrell’s 12 Jiffy Lube franchises. So, for the past three months, Williams has been learning the oil-change business and how to run a small business.

“It’s something I’ve never done before and I’m loving it,” he said. “Some days I’m an IT guy, other days I’m a marketing guy exploring new ways to market. There is management training.” 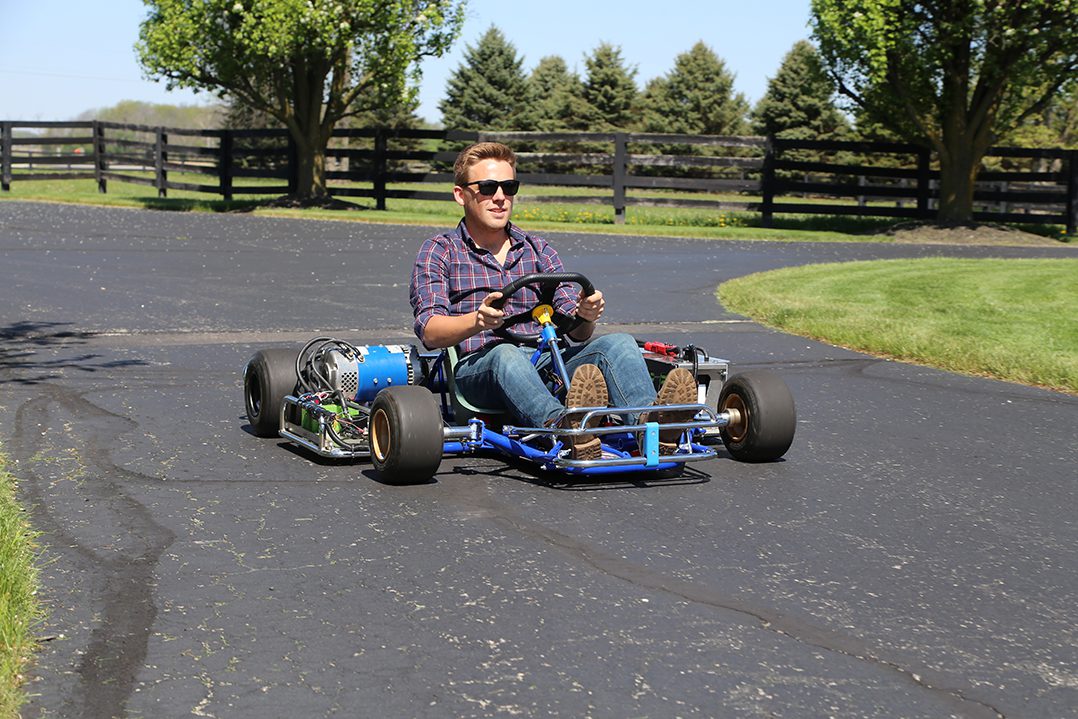 On purpose: “I would consider myself a maker, whether it’s the three things I’m in now or when I was at Purdue. Just making products or making things happen. I used to make go-karts. Now, I’m making the (evGrand Prix) happen for others.”

On learning from Mark Cuban: “One thing I learned from Mark is really knows how to run a company well in terms of budgeting, what money should be spent on marketing, how much should be spent on development, basically making a lean start-up,” Williams said. “We might think we need to spend money on this or that, but because he’s so experienced he knows dollars spent in this category will have much more of an effect in this category or money spent in that category.  In general, just being able to be lean and efficient in starting a business.”