A YMCA facility has been proposed at a new development called Wheeler Landing. If approved, the facility will be built at 181st Street and Wheeler Road.

Westfield Washington Schools, longtime Westfield descendants of the Wheeler family, and the YMCA of Greater Indianapolis have announced plans for a new $35 million YMCA facility near Grand Park. A YMCA was originally planned for the Grand Millennium Center on Westfield Boulevard.

Details of the proposed facility in the Wheeler Landing Planned Unit Development were first presented at the May 7 Westfield Advisory Plan Commission meeting.

The plan proposed the Wheeler family and Westfield Washington Schools enter into a non-binding memorandum of understanding to build an Olympic-sized natatorium and YMCA facility at the southwest corner of Wheeler Road and 181st Street. The branch would encompass 65,000 square feet and also include a running track, basketball courts, family and child care area and fitness rooms.

Nick Churchill spoke on behalf of the Wheeler family at the APC meeting. The Wheelers have lived in Westfield since 1870. He said depending on several preconditions, including fundraising for the YMCA, groundbreaking could be as early as spring 2019.

“The family is very excited about this,” Churchill told the APC. “It is right down the street from the schools and would add a much-needed facility nearby.”

The family decided to donate the land to the YMCA of Greater Indianapolis.

A public hearing was held during a May 15 special session Westfield Washington Schools Board of Trustees meeting at Westfield Intermediate School.

Matt Schumaker, managing director of Stifel Public Finance, presented to the board on behalf of the school corporation. He said the district will enter into a lease agreement for 20 years and pay an annual rent of $1.7 million. The maximum estimated amount of bonds is $15 million, with a 1 to 6 percent interest rate.

Supt. Sherry Grate said after conducting focus group meetings to accommodate growth through demographic studies, there were still many unanswered questions about the pool space.

“Maximizing instructional space is a priority of our projects,” Grate said.

Grate said the district would not have to ask voters for more money by placing another referendum on the ballot because capital is already available. She said it would not have an impact on tax rates.

“The purpose of our hearing is to move forward with a very exciting project,” Grate said.

Plans presented by the Wheeler family at the APC meeting also show a potential expansion of Oak Ridge Road to 181st Street, along with adding additional drainage and retention ponds in the zoned area near the new YMCA.

WWS plans on contributing $15 million to the project for the natatorium, with the YMCA spending $20 million for the facility. The district said the upkeep for both the middle and high school pools would top $20 million if they continue to operate.

The planned YMCA inside the Wheeler Planned Unit Development is expected to be completed by the fall of 2020.

The board unanimously approved three project resolutions, including a bond estimated at $15 million for the new project. 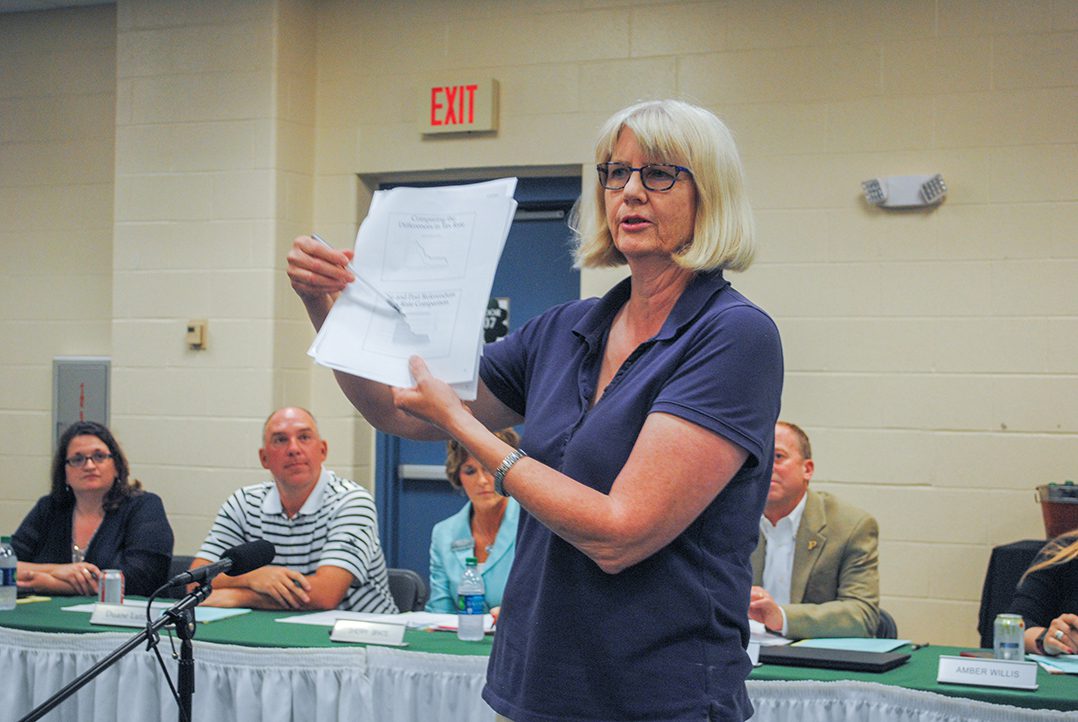 Janice Mowry raises concerns about WWS entering into a nonbinding agreement with the YMCA. (Photo by Anna Skinner)

Citizens speak on the proposed agreement between the YMCA and WWS

During the school board’s special session May 15, local residents voiced their opinions on the district’s partnership with the YMCA and spending of $15 million on an upgraded natatorium.

Janice Mowry, parent of a student swimmer, was the first to address the board.

Mowry said after participating in the focus groups, she was concerned the board would keep asking taxpayers to fund other projects.

“Are we going to be looking at more funds for the administrative building and ailing buses?” she said. “Where is this going to stop? I want to make sure of that as you’re considering these things and what is out there on the horizon.”

Grate said the focus groups were able to show the debt structure and how new projects would be approached and debt handled. She said the district has been “drastically negatively impacted” by property tax caps, losing $70,000 annually.

“That could have been used to reinvest in new facilities,” Grate said. “We have a more proactive state of plans for those projects. We don’t want to be going out for another capital referendum.” 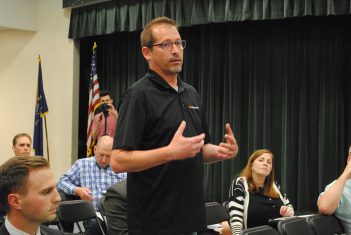 Westfield resident Andrew Hammond expresses his concerns regarding WWS entering into a nonbinding agreement with the YMCA to open a new, Olympic- sized natatorium. (Photo Illustration)

Grate said the final memorandum of understanding has not been completed and the district is beginning to work through final details. The board would first have to approve the agreement.

“We have approved this referendum, and you did not consider the pool. That is absolutely shocking that we are providing you all this money and you just found $15 million and you did not tell us anything about it,” he said.

Hammond asked what else the community may have been misled on.

Grate acknowledged his concerns and said there were a lot of unanswered questions.

“By going over $90 million, we felt that was the threshold,” Grate said. “At the end of the day, we could have done that. But it would not have improved the status of the pool. We would still have long-term costs.”

Grate said it was also unknown at the time of the referendum if opportunities for  partnerships such as the YMCA were available.