Indianapolis Colts General Manager Chris Ballard couldn’t believe when he heard there was one more question left and no one had yet asked about Andrew Luck’s health. 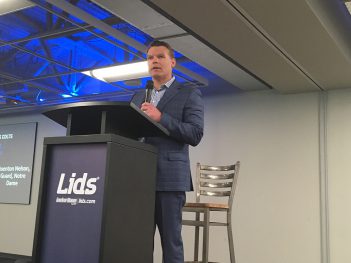 “Somebody has to ask an Andrew Luck question, I don’t go anywhere where I’m not asked,” Ballard said.

The final questioner obliged at the Zionsville Rotary Club fundraising luncheon on May 17 at Lids headquarters in Zionsville, asking was it safe assumption  Luck was fine after missing the 2017 season following shoulder surgery because any good general manager would have taken another QB in the draft if not.

“He’s the strongest I’ve seen both mentally and physically,” Ballard said. “Do I wish he would just go out there and let’s just fill the stadium and let (Luck) throw 150 balls? Gosh, that would be great. But that’s not where we are at. He’s doing great. He’s going to play a long time for the Colts. That’s been our goal all along. He stands for everything we want to stand for.”

“We will never again not be good up front from this point going forward,” Ballard said. “That’s how you win in this league. That’s how you sustain winning in this league. If your O-line, D-line and front seven defensively is good, you got a chance to win every week even with a quarterback who doesn’t play good.”

Although the team won’t ignore free agent players, Ballard made it clear that he wants to build through the draft.

Ballard pointed out it worked in Indianapolis, too, as players such as Peyton Manning, Marvin Harrison, Reggie Wayne, Edgerrin James, Dwight Freeney and Robert Mathis were all Colts draft picks.

“They were career Colts for the most part,” Ballard said. “You got to watch them grow up.”