You are at:Home»Current in Carmel»Carmel Community»Gnomes help raise money for Habitat homes 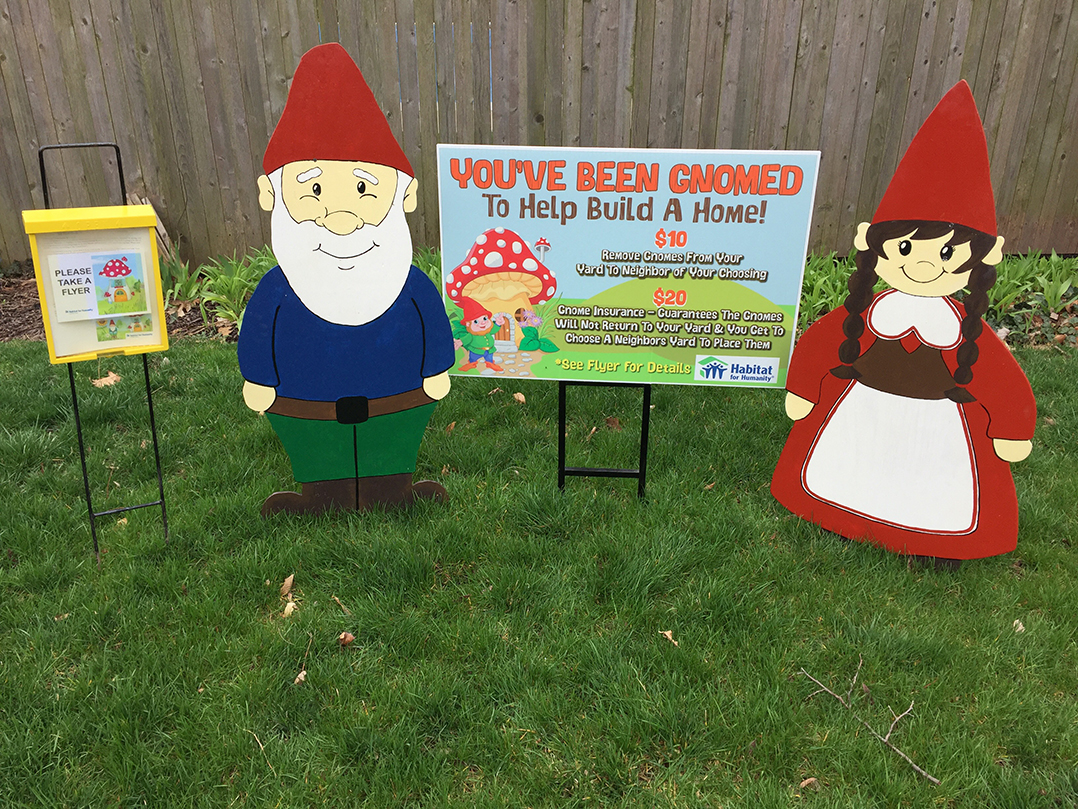 Two gnomes recently moved from house to house in Carmel as part of a fundraiser for Habitat for Humanity. (Submitted photo)

Jamie Woodruff was searching her brain to find out a way to raise money for Habitat for Humanity of Hamilton County’s build.

“It’s hard to ask for money from friends, family and neighbors,” the Carmel resident said.  “I kept thinking, ‘What rhymes with home?’ and came up with gnome.”

Woodruff shared it with a friend and build-team leader, Jen Petersen, who helped her design and make two, 3-foot wooden gnomes.

“Every night I would place them in a friend or neighbor’s yard,” Woodruff said. “For $10 I’d remove it from their yard and for $20 they would buy gnome insurance, which guaranteed it wouldn’t come back to their yard.”

The Women’s Build Week for a home for a refugee family, originally from Afghanistan, in Carmel was May 8 to 12. The full home-build started May 4 and is expected to last until June 1. Woodruff’s team consists of other mothers of a Carmel Pups travel baseball team. The team name was Swing, Hammer, Hammer.

Woodruff said she raised $820 in three weeks, through May 4.

“All the kids were getting excited because they would see the gnomes in people’s yards and couldn’t wait to get it in their yard,” Woodruff said. “It was almost like Christmas with the kids waking up to see if they got (the gnomes). One boy dressed like a gnome. We had fun with it. I met some new people. It ended up going out of our neighborhood and into other neighborhoods. I look back if I had five sets of gnomes, that would have been golden because I could have raised even more money. When it’s over, I’m giving the gnomes to Habitat so another family can start doing it.”