Like many driving or walking in Indianapolis the past several months, Chris Bucher has his bouts with potholes.

The 1987 Carmel High School graduate deals with them constantly because he lives in downtown Indianapolis. 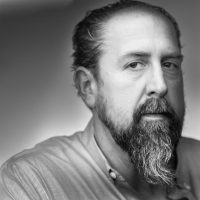 ‘“I was walking my dog and I got splashed because a truck drove through what looked like a tiny puddle, but the problem was there was a hole that looked 8 inches deep,” said Bucher, a full-time photographer. “It was a huge pothole. It just soaked us. It was a gloomy gray day. I thought I had to do something about this. In my head, I just had a vision of the dreary, dark photo of the Nessie (Loch Ness Monster) in the water, so I had to find a toy dinosaur.”

Thus, a photo array was born in late February.

Bucher said the toy floated originally but he cut it open and filled it with water so it would sink a little.

Bucher put toy dinosaurs and other toys around other photos.

“I put it on my Instagram (@bucherphoto) and people just went nuts for it,” Bucher said. “Then it started to get some other media play from TV stations. I posted a dozen or so.”

An exhibit at Flat 12 Bierwerks, near Bucher’s home, featured 20 photos.

Bucher does a lot of commercial photography for businesses.

“This was just a fun thing that came out of social media,” Bucher said. “This (pothole problem) was a big deal for everyone here the last few months.”

Almost all of the photos were taken when he was walking his dog, a Belgian malinois named George, on long walks.

“I didn’t go out of my way to create things,” Bucher said. “I was getting texts or messages saying you have to come to the pothole in my community. I was able to see plenty of potholes in the walks around my neighborhood.”