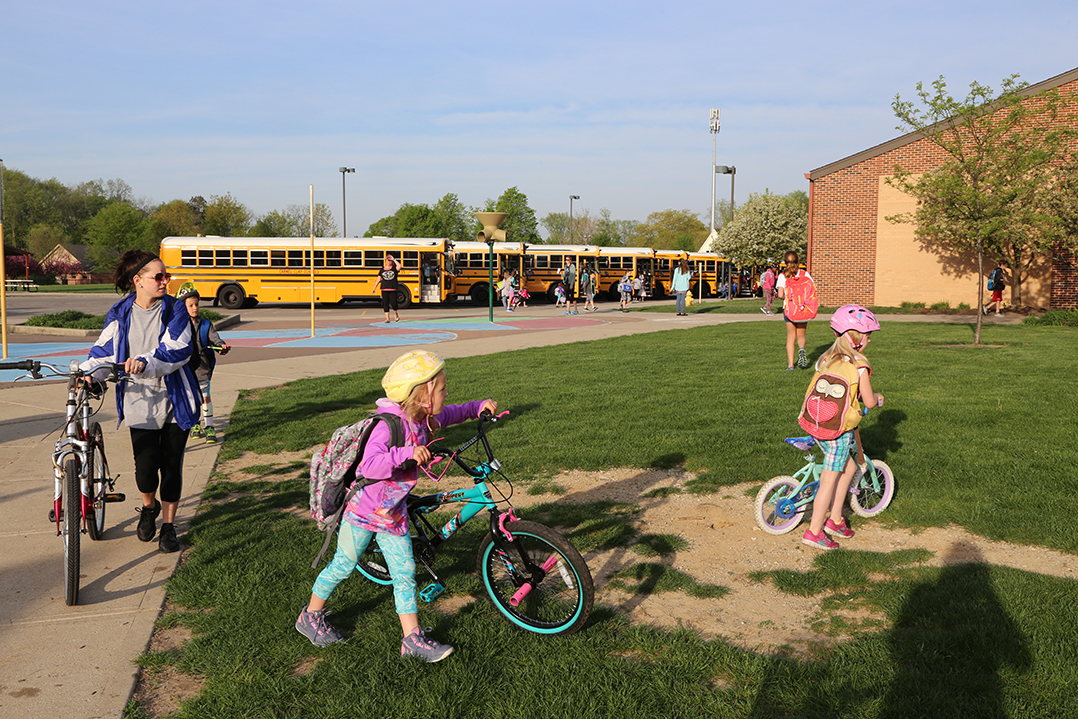 Forest Dale Elementary students park their bikes May 9 on National Bike to School Day as some of their classmates exit school buses. (Photo by Ann Marie Shambaugh)

Carmel Clay Schools joined more than 2,500 schools nationwide May 9 for National Bike to School Day, with hundreds of students pedaling their way to class.

The district has taken steps to make it easier to bike or walk to school, adding bike racks at elementary campuses and extending sidewalks to connect with nearby neighborhoods. The City of Carmel also has worked to become more bike friendly near schools and elsewhere.

So, in a city that values bicycling as much as Carmel, what’s a parent to do?

For some parents, regularly biking to school is an easy decision.

Chad Braugher, who has a 6-year-old daughter at Carmel Elementary, said he regularly surprises her by bringing the bike with the tag-along when school lets out.

“It makes you feel like you’re part of the community,” he said. “I think it brings connection to the area. She is just delighted when she sees me pull up and pick her up on the bike. Her eyes light up and this is part of our special time together.”

But other parents are hesitant to have their children bike or walk to school.

“He could have biked to that school, but once a child gets to Guilford (Road) it becomes very dangerous,” she said. “I would not ride that as an adult during carpool, let alone let my child.”

Some on the Carmel City Council would like to see more parents consider biking as an option for their school children.

Councilors Ron Carter and Bruce Kimball were strong supporters of a new bicycle administrator position at City Hall, a role that eventually morphed into a transportation development coordinator that was approved at an annual salary range of $57,552 to $69,063, depending on skills and experience. That person, among other duties, will help identify and promote safe routes to each school.

“We’re not forcing anybody, but we’d like to see this option come back,” Kimball said. 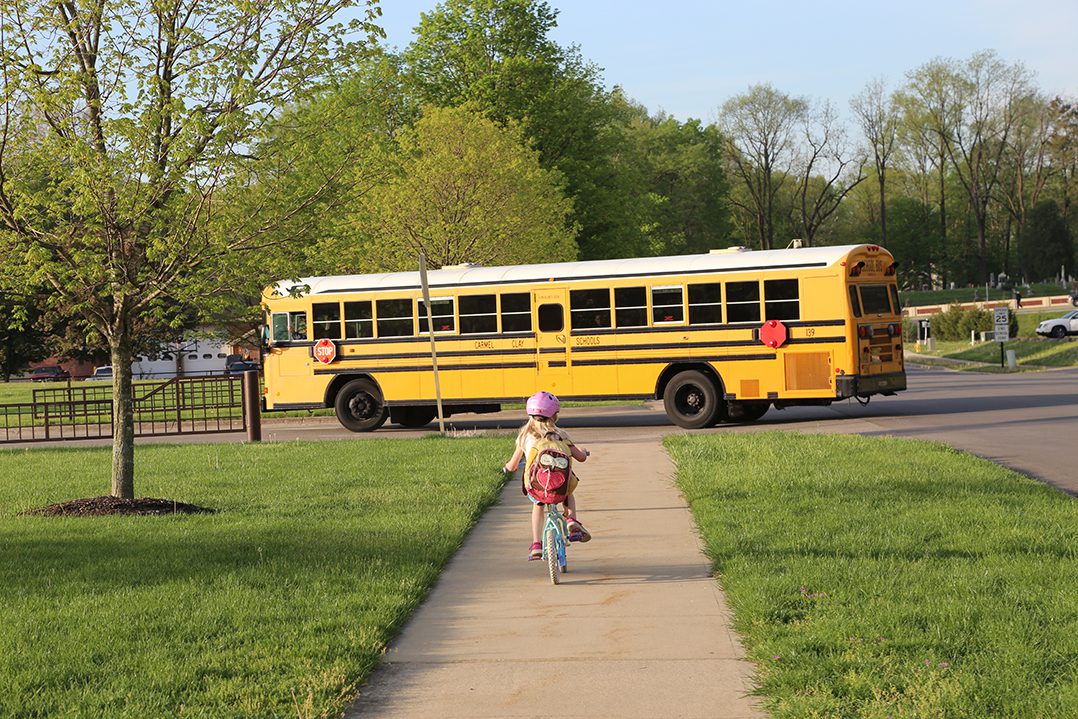 Carmel is working to promote bicycling, including to and from school, although research shows school buses are the safest way to get to campus. (Photo by Ann Marie Shambaugh)

Carter said some Carmel schools do a better job of promoting biking than others. Besides identifying and promoting safe routes, he said there are other things schools can do,  such as placing bike racks in convenient places.

Carter said he remembers years ago that a walk program was going to be rolled out and that some parents spoke out against it. He said some of the reasons were concerns  children could be abducted by criminals or attacked by coyotes, or that kids could fall into retention ponds.

Carter said he doesn’t want to tell anyone how to raise their kids, but he said many children are responsible enough to handle biking to school on their own. He said grades four to eight are the primary target.

Kimball said studies show that kids who bike to school get better grades, and if enough kids bike it could alleviate traffic congestion at car drop-off/pick-up lines in the spring.

CCS spokeswoman Courtney Taylor said the district has 188 yellow school buses and the annual overall transportation costs for the district is roughly $8.5 million. Maintenance of student parking lots, such as potholes, is minimal.

But for some parents the biggest hurdle is safety.

Miller said even if a child is safe and responsible, motorists are unpredictable.

“I am not sure I trust some of the parents to drive safely around kids who are on their bikes,” she said. “Some of these parents are seriously in a hurry and not thinking about the safety of the kids around them. Cutting in and out of carpool lanes, driving aggressively when kids are around and kids darting through carpool and around cars to meet their parents so they can get to whatever is next for them on time is crazy to me. This in itself is dangerous. Parents are not paying attention. They are staring at their cellphones or distracted.”

Carter is a former crossing guard. He said a program like that in Carmel could help parents feel safe letting their children cross busier streets.

Carmel Mayor Jim Brainard said there are safe paths to each school but he’s willing to invest in further path improvements. Some upgrades are already planned.

“Most of the paths exist, but there are some improvements scheduled to be made in the next five to 10 years,” he said.

Walkability cited to save elementary campuses

Parents at Orchard Park and Carmel elementary schools have been organizing to oppose the idea that either or both schools could close as Carmel Clay Schools considers how to deal with aging campuses and declining enrollment projections.

A major reasons they insist both schools should remain open is because they are perfectly situated for students to bike or walk to school.

“In the central district I’m hearing many parents picked Carmel to live because of schools, but they picked the central district because of its walkability and emerging bicycle friendliness,” Carmel City Councilor Bruce Kimball said. “Orchard Park parents have already reached out to us to (see how) we can make their school bicycle friendly. It’s becoming evident more young families look at active living and the bike infrastructure as to why they pick Carmel’s central core to live versus other cities.”

Chad Baugher likes to bike with his 6-year-old to Carmel Elementary and thinks the location is ideal.

“If the school is too far away and you can’t walk or bike to it, then you just feel like you’re in the suburbs again,” he said. “We love the urban-surburban renaissance that’s going on in downtown Carmel.”

Emily Ehrgott, who has children at Orchard Park, said it’s important to keep schools that are walkable and bicycle friendly.

“Believe me, kids miss the bus all the time,” she said. “These schools are woven into these neighborhoods so deep that people actually strictly buy homes within these neighborhoods. It is an advantage in not only convenience for families but also an advantage for realtors to sell homes. Orchard Park is adjacent to the Monon. You can get to school from almost everywhere in the boundaries. That is such a huge advantage.”