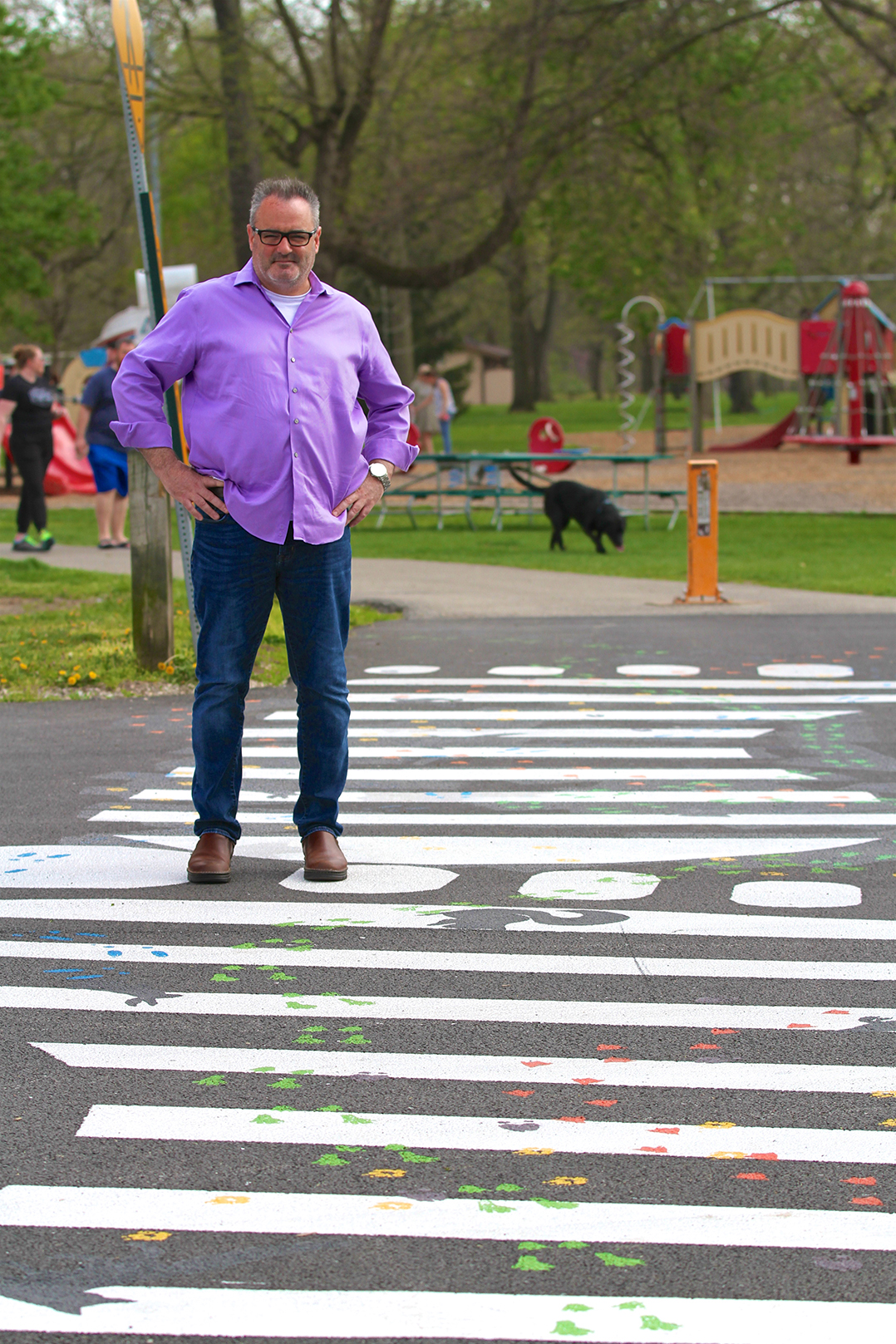 The city’s oldest park, Forest Park, will celebrate its 93rd birthday at the end of this year, and the City of Noblesville and its parks department are working this spring and summer to make improvements with the help of a local artist.

Darren Peterson, who owns Peterson Architecture in downtown Noblesville, recently was chosen as the artist behind two new crosswalks in the park.

Not your everyday crosswalk with plain, white stripes, the works of art play off of the character of the park that includes year-round recreation opportunities for visitors.

The first crosswalk, which connects the Forest Park Aquatic Center to the north side of the park, features a large fish skeleton, each bone forming a line on the path. Woven between each bone and line are vibrant, colorful fish swimming toward the aquatic center.

The second crosswalk, which connects the park’s main walking path on the drive that leads to Forest Park Inn in the center of the park, features two large footprints, making up the crosswalk’s white markings. The white markings include silhouettes of animals that can be found in the park – a duck, squirrel, rabbit, fox and goose. For color, footprint paths of the animals are printed along the walking path.

“Safety was important, so I kind of thought about things that have the same rhythm and pattern to it (as a crosswalk),” Peterson said.

The fish skeleton crosswalk connects the Forest Park Aquatic Center to the north side of the park.

“We’re always looking for ways to incorporate art in our parks and we saw this as a great opportunity to update the crosswalks in a fun, creative way,” Parks Director Brandon Bennett said. “Parks staff are involved with various art councils around town, which is where we first heard about Nickel Plate Arts transforming other crosswalks, and we knew we wanted to work with them on this project.”

For Forest Park’s crosswalks, the Noblesville Parks Dept. worked with Nickel Plate Arts to form a selection committee, which reviewed numerous entries before selecting the two designs by Peterson.

“The two parks crosswalk projects were a great opportunity to develop some ideas and use some lessons learned on the first two Nickel Plate Arts crosswalks – at Eighth and Maple and Ninth and Maple – to create a fun, whimsical, large-scale art project in Forest Park,” Peterson said. “The part I enjoy most about the projects is community-building, because none of these wacky ideas happen without volunteers, partners and the entire community.”

The project was launched on Peterson’s birthday, April 21 and 22, with a group of volunteers and artists. 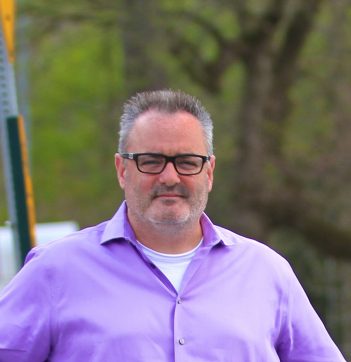 Darren Peterson has lived in Noblesville for 25 years. He has two daughters, Emily, a junior at Ball State University, and Ava, a senior at Noblesville High School, and is engaged to Jennifer Roberts. He owns Peterson Architecture downtown and serves on the board of directors for Noblesville Main Street, Keep Noblesville Beautiful and Nickel Plate Arts.

OTHER FOREST PARK IMPROVEMENTS IN THE WORKS