You are at:Home»Current in Carmel»Carmel Business Local»Donut Refinery allows customers to build their own morning treats

For four years, Stephany Steiner, a stay-at-home mom in Zionsville, has been toying with the idea of opening up a boutique donut shop.

“It started as a love for donuts,” she said. “I’d work on the idea when my kids were napping or at school.” 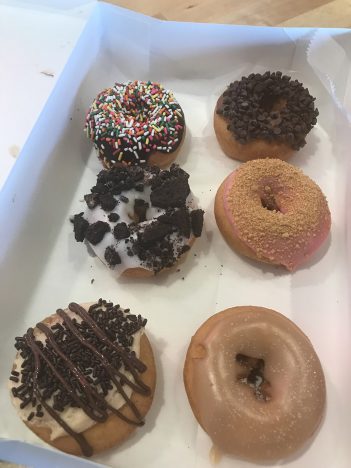 Customers can create their own donuts at Donut Refinery. (Photo by Adam Aasen)

Steiner wanted to do something similar to Charlie’s Donuts in Florida. When her family would visit Rosemary Beach, they’d wake up early to get fresh donuts around 6 or 6:30 a.m. since there would be a long line and they’d sell out fast.

Steiner wanted to create something unique with that same kind of draw. After long nights of researching and lots of donut tasting, she said “our stars aligned” and she opened her own shop, the Donut Refinery, on Old Meridian Street in Carmel next to Brockway Public House. Hours are 7 a.m. to 3 p.m. Monday through Friday, 8 a.m. to 3 p.m. on Saturdays and 9 a.m. to noon Sundays.

The concept is a little different from other local donut shops. Customers build their own donut by starting off with a vanilla cake donut and adding icing, a topping and a drizzle. Icings include vanilla, chocolate, maple, caramel and more. Toppings include sprinkles, Oreos, bacon, nuts, fruity pebbles and more. Cost is $1.75 for a single donut, $9.50 for a half dozen and $18 for a dozen.

The Donut Refinery will fills large orders ahead of time and creates treats for special events such as birthday parties and weddings.