You are at:Home»Current in Carmel»Carmel Community»Carmel couple runs, organizes race to raise funds for clean water 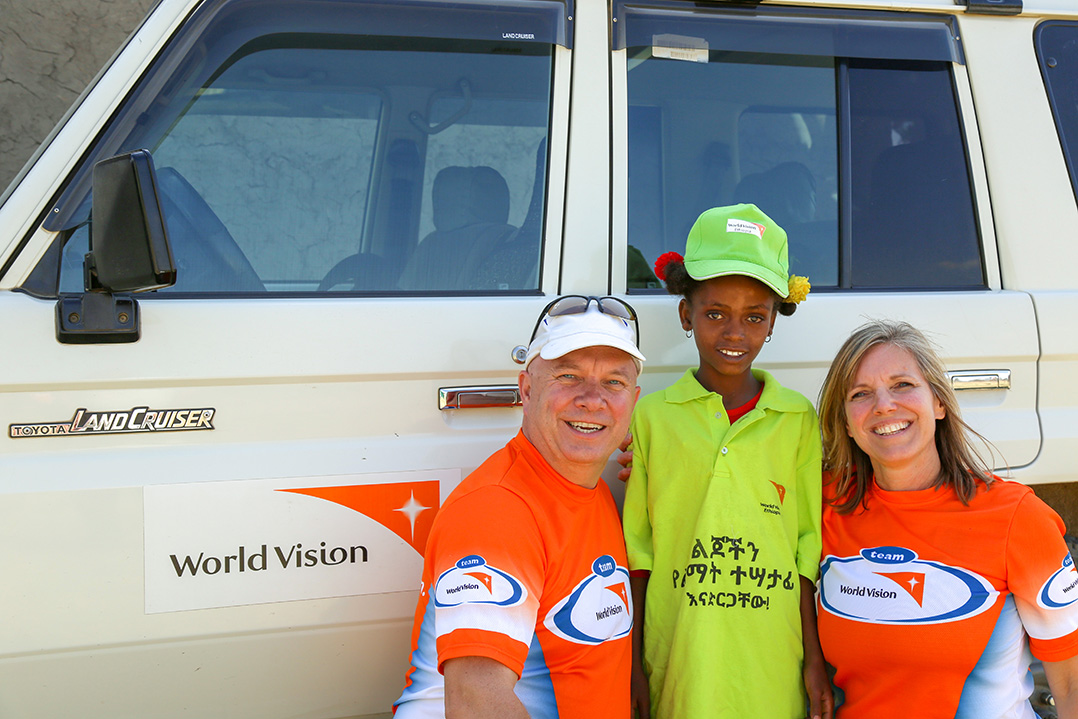 Debbie and Evan McBroom pause with Gato, a sponsor child from Ethiopia, next to a World Vision vehicle. (Submitted photo)

“When I was about to turn 50, I had been running half-marathons for several years but never thought I was capable of doing a full marathon,” McBroom said.

Friends encouraged him to do it and suggested he sign up for Team World Vision.

“You’ll have a bunch of people to train with and you’ll raise money for clean water in Africa in the process of running the race,” the Carmel resident said.

McBroom, now 53, signed up to run the Chicago Marathon in October 2014 and raised approximately $7,000. His wife, Debbie, got inspired.

“And I had never been a runner,” she said. “I started running with him. I did my first full marathon in the Chicago Marathon in 2016.”

“I felt heavy-hearted about that because I wanted to include an event to include kids,” said Debbie, who recently retired as a full-time retired preschool teacher.

So the McBrooms, along with friend Beth Russo, decided to host a World Vision Global 6K for Water. It will be held May 19 in Carmel, starting at 8:30 a.m. at the Orchard Park Presbyterian Church parking lot. It will be held at hundreds of sites on the same day around the world. In 2017, there were 600 sites in several nations.

“So we decided to host this race so I can educate children on the need for clean water in other countries,” Debbie said.

McBroom said lots of people can walk or run the 3.7-mile course.

Instead of a bib number, participants wear the face of a child they are running to support.

McBroom said money can be raised in a variety of ways, including Facebook.

“For every $50 that is donated, World Vision can bring sustainable, clean water for one person in Africa,” McBroom said.  “A big part of our passion for this is we’ve been to Ethiopia (in 2015) and saw first-hand the need for clear water and we’ve seen the impact on a community when they get clean water.”

The couple has a sponsored child in Ethiopia. Debbie said the trip inspired her to do whatever she could to help them build more clean water wells and reservoirs.

“It’s so heart-breaking with the struggles they have,” Debbie said. “All they can focus on is making sure they can get water every day and it’s not even clean.”

When McBroom started there were two Indianapolis-area churches involved.

“In my regular work, all of my clients are churches,” said McBroom, works for Fishhook, a marketing and communications company. “I thought I know all these church leaders and I love this cause. I decided I would start volunteering to make introductions so I would get more churches involved.”

The number of churches keeps growing, reaching 25 last year. In 2017, McBroom said more than $600,000 was raised from the Indianapolis-area churches.

Their oldest daughter, Bailey, 25, is a part-time staffer for World Vision in Nashville, Tenn.

“It’s changed our story as a family,” said McBroom said of their bonding together for the cause. “As a family, we’ve raised around $25,000. It’s a big deal our friends are generous and it’s a big deal it’s knit our family together in a way it wasn’t before.”

Adult registration is $50 and $25 for participants 18 and younger. For more, visit tinyurl.com/Carmel6K.