You are at:Home»Current in Zionsville»Zionsville Community»Nielsen wins big in Republican primary for Boone County sheriff

Boone County Sheriff Mike Nielsen is on track to serve four more years in office after voters overwhelmingly elected him over Mike Greene in the May 8 Republican primary. 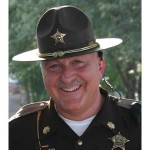 “I appreciate the support of all the Boone County voters, and I think that our past four and a half years that we’ve had with the Sheriff’s Office with me as sheriff and the command team and everybody we’ve got surrounding us is testimony to the fact that it’s going to be another good four years for the sheriff’s office,” Nielsen said when reached by phone. “We’re excited at this point we’ve got another opportunity to continue our five-year strategic plan we’re in the second year of implementing.”

No candidate filed to run for sheriff in the democratic primary. The Republican and Democratic parties have until noon June 30 to select a candidate to fill a vacancy on the general election ballot caused by no candidate being nominated through a primary. That is also the deadline for the Libertarian party to nominate a candidate or fill a ballot vacancy.