You are at:Home»Current in Fishers»Fishers Business Local»Architura Corp. to host open houses in Fishers 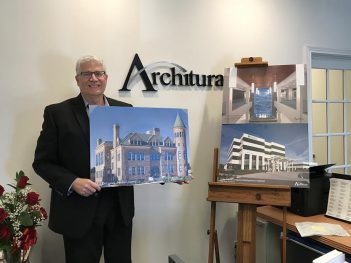 Owners Michael Conley and Chuck Kotterman have lived in Fishers for 23 years and have more than 70 years of combined industry experience.

Kotterman said he met Conley through a mutual friend and founded the company in 2000.

“We have seen some steady growth so far and we always kept a small size. We don’t like to increase staff when we get a lot of work because we don’t like to lay off people,” he said.

The company has five employees, plus the two owners. But Kotterman said the firm could use more employees.

“Government work is picking up, our (Veterans Affairs) contract will produce a lot of work, and we have a contract with the General Services Administration,” Kotterman said.

The General Services Administration leases property to tenants. Architura is an architect firm separate from developers.

“We have a unique situation where Architura has done some work on almost every federal building in the state,” Kotterman said.

That has included study work on the Hamilton County Courthouse, specifically for additions.

Kotterman said Architura moved to Fishers from Indianapolis because of the favorable work environment.

“We saw some opportunities in Hamilton County and the Fishers area,” he said. “I am still connected to downtown, but here I don’t feel like I am missing any of that energy, and I like the feeling of being here. It’s peaceful.”

In Westfield, Architura was responsible for designing the Monon Marketplace along Ind. 32 near Wheeler Road.

Kotterman said Architura also is working on a similar shopping area near the new Cambria Suites at Grand Park.

“We have been working on and off on that for four years,” he said, “It’s been kind of a labor of love.”

Kotterman said tenants have not locked in yet on that project. He said he anticipates a sloped roof and much more of a stylized design next to the hotel.

Other recent projects include the upgraded Delta Faucet Corporate Headquarters expansion in Carmel.