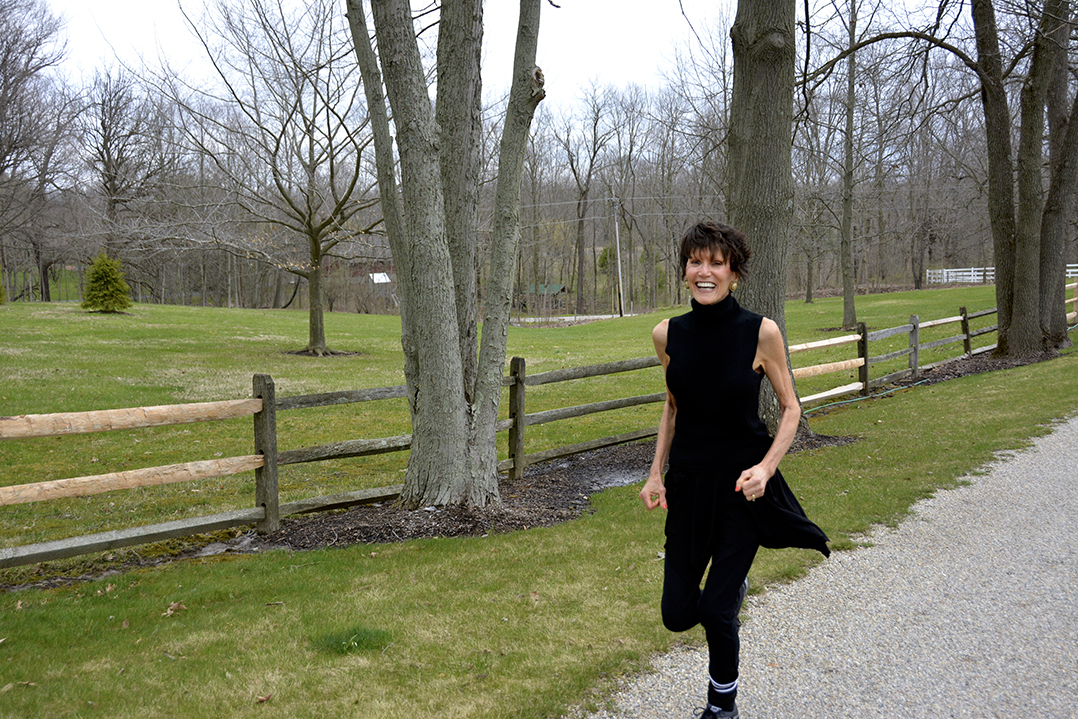 Katie Haun jogs on her Zionsville property. She operates a wellness center out of her home that provides a variety of natural health care services. (Photo by Lisa Price)

At 19 years old, Katie Haun was told she might never walk again.

While driving to a Notre Dame football game in 1969, Haun was involved in a near-fatal car accident and suffered serious injuries, including broken bones in her face and a broken back. She had to breathe through a tracheostomy and had her mouth wired shut.

Because Haun didn’t know when she would recover, Eli Lilly terminated her employment just weeks after she was hired- a devestating blow for someone who lost her father at age 5 and mother at age 16.

“(I suffered from) the emotional loss of my parents, and then the job loss and now my identity was totally lost,” the Zionsville resident said. “You couldn’t recognize me.”

Haun, 67, found her identity again through running. She will participate in her 35th 500 Festival Mini-Marathon May 5.

After a year of surgical procedures and learning to breathe, talk and walk again, Haun developed a passion for running when she met Bill Gavaghan, an avid runner who finished second in the first Mini-Marathon in 1977 and qualified for the Olympic trials in 1980. 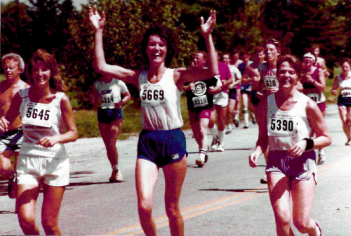 Katie Haun runs in her first Mini Marathon in 1982. She’s only missed one Mini Marathon since, when she was receiving treatment for breast cancer. (Submitted photo)

“She thinks that Bill inspired her, but really she was self-motivated about it,” Mary said.

Haun was re-hired at Eli Lilly in 1970 and later began running with her co-worker, Jan Caito, whom Haun credits with the inspiration to run her first Mini-Marathon in 1982. Haun and Caito trained daily and finished the race in 2 hours and 6 minutes.

“I wanted to prove to myself that I was back,” Haun said. “Also, in gratitude and appreciation, I wanted to be able to do this.”

Haun has missed only one Mini in the last 36 years.

In 1996, Haun was unable to participate because of breast cancer surgery. She was given a 55 percent chance for five-year survival after completing treatment, which she said were 8 to 10 times stronger than normal. She went through chemotherapy, radiation and a stem cell transplant.

“I didn’t understand how you could do that to somebody’s body that is already sick, and then how do they recover?,” Haun said. “It’s nutrition. The body has to rebuild and repair, and that wasn’t part of what was being offered to me.”

She sought help from Dr. Dale Guyer of the Guyer Institute of Molecular Medicine. Guyer is a family doctor who specializes in holistic medicine, including acupuncture, supplements and regenerative treatments to restore balance to the body.

“What I’ve seen is if you couple the nutritional therapies with various nutritional supplements and things like that, the toxic effects of (conventional) treatments are way less,” Guyer said. “People feel better. They’re more functional. The side effects are a lot less, but also the outcomes are a lot better.”

Haun utilized several nutritional supplements and IV vitamin therapy, which is an infusion of vitamins and minerals that boost the immune system and allow it to work more efficiently.

Haun completed the traditional treatments on April 25, 1997, and remained determined to participate in the Mini on May 3, 1997. Her doctors would not allow her to run, but she could walk. Haun has walked the Mini every year since.

“I look at what has happened (as a sign) that (God) has more work for me,” she said. “My calling hasn’t ended.” 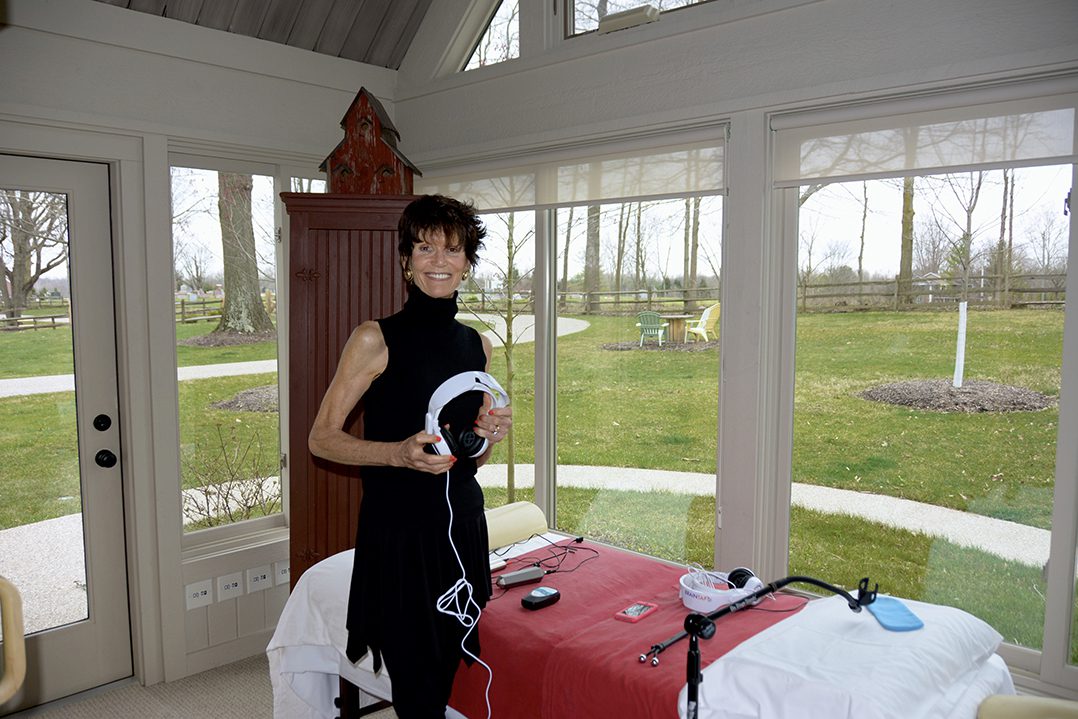 Katie Haun operates a wellness center out of her Zionsville home that provides a variety of natural health care services. (Photo by Lisa Price)

Haun left Eli Lilly in 2002 to attend Trinity School of Natural Health to become a certified natural health care professional. For the last 15 years, she and her husband of 40 years, Dave, have operated a wellness center out of their home in Zionsville.

“My mission is (for) the mind, body and spirit (to be) all balanced and operating efficiently for you to become all that you possibly can become,” Haun said.

The center includes an infrared sauna, nutritional counseling, brain balancing, pain relief, a yoga and Pilates room and meditation rooms. Haun wants the center to be a place for people to enjoy pure air and water, high-quality food and relaxation.

“I am trying to create a business that didn’t exist that I wanted,” she said.

Haun plans to eventually offer the center to businesses and organizations for team-building and conferences.

• One lap around the Indianapolis Motor Speedway’s 2.5 mile oval track

Registration is available for $100 May 3 and 4 at the Expo at the Indiana Convention Center, 100 S. Capitol Ave, Indianapolis. Learn more at IndyMini.com.