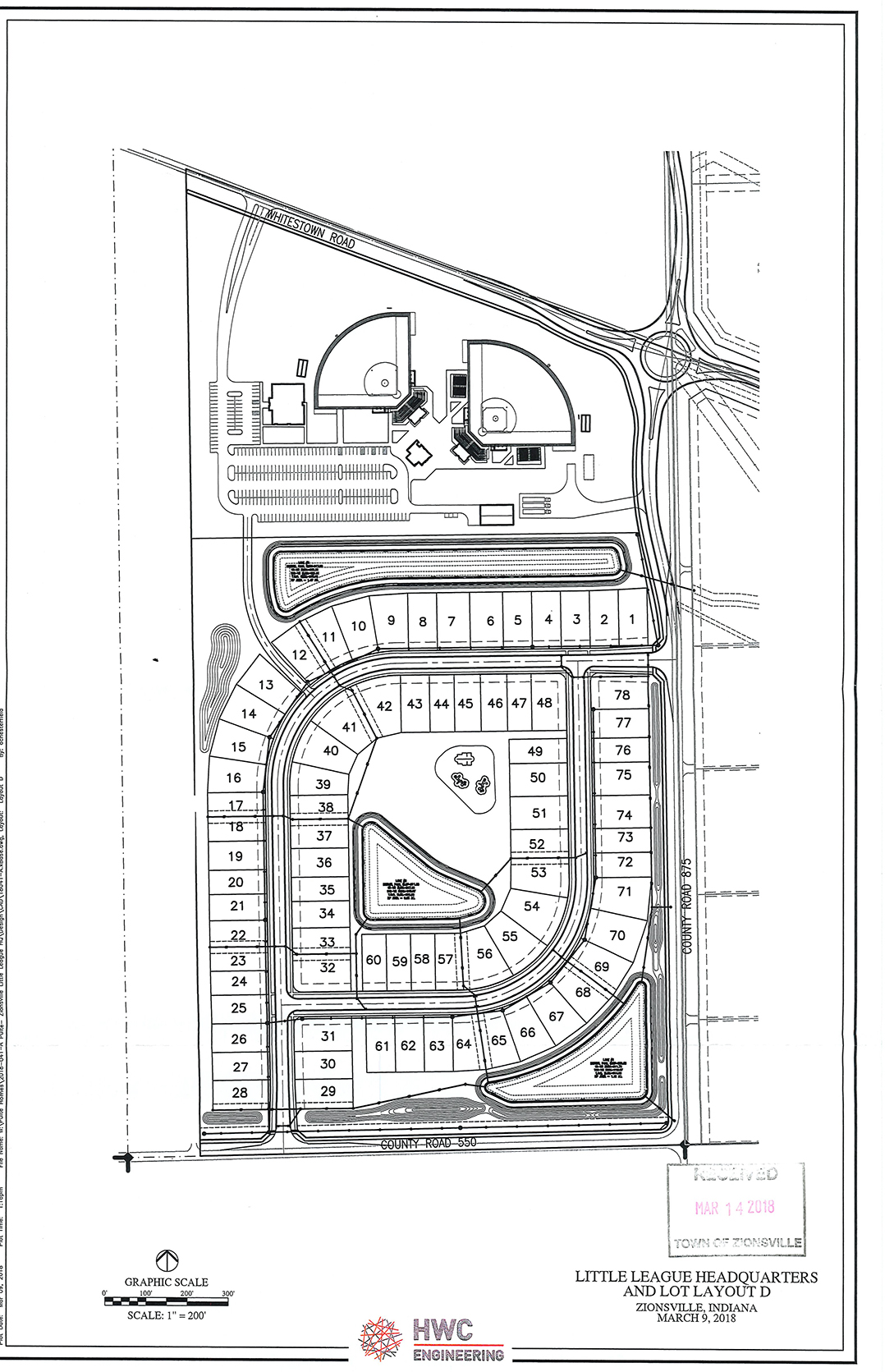 A Pulte Homes development is proposed just south of a 18 acres that could be donated for Little League International’s Central Region Headquarters at 8602 E 500 S. (Submitted photo)

The Zionsville Plan Commission approved the rezoning of 18 acres to accommodate Little League International’s Central Region Headquarters, but several people who live nearby said they were surprised to see a new neighborhood tied to the plan.

Commissioners voted, 5-1, at their April 16 meeting to send a favorable recommendation of the rezoning request to the Zionsville Town Council. If approved by the council, the site at 8602 E 500 S would switch from residential to special use zoning. According to documents filed with the town, the southern portion of the property is proposed to include 78 houses built by Pulte Homes.

“If there’s anything unprecedented about this project in the Town of Zionsville, it’s that a private developer is donating 18 contiguous acres of ground that could otherwise be used developed to a nonprofit for a purpose that’s not been done before by anybody,” Price said.

He also said the Zionsville Local Organizing Committee – a group that formed to promote Zionsville to Little League International – approached Scott Mairn, a division president with Pulte, in part because of Mairn’s baseball history. Pulte officials did not respond to specific questions about the project but issued a statement from Mairn.

“When the ZLOC approached Pulte to help bring the Central Region Headquarters for Little League to Zionsville, I personally was very excited for the town,” it states. “As someone who grew up playing Little League baseball and was fortunate enough to play at higher levels, our goal was to find a solution that would allow the relocation of its headquarters to become a reality.”

Several Zionsville residents who live near the proposed development attended the ZPC meeting to express concerns about the rezoning, including the potential traffic impact and housing density that “exists nowhere else in Zionsville,” according to remonstrator Kevin Schiferl. An attorney and former plan commission member who owns a horse farm near the proposed site, Schiferl said at the meeting that town officials and ZLOC members quietly changed the original site and scope of the project.

“This is a case of rush rush, hush hush,” he said.

Nearby resident Angie Isenthal said she worries that the neighbors will have to deal with “the headache” of traffic and road conditions while the biggest benefit will be to neighboring municipalities with hotels, an amenity Zionsville doesn’t have. Past reports have stated the headquarters is expected to generate approximately 8,000 hotel room stays in the area per year.

“If this was going to help Zionsville and build the wealth of Zionsville, I could understand that,” she said. “(Visitors) are putting all their money in our surrounding areas.”

Commissioner Larry Jones said that he sees the headquarters as providing an economic boost to Zionsville and its neighbors.

“That’s $2 million-plus for the town,” he said. “We don’t have hotels, and we’re getting picked apart by Whitestown for cheap food outlets, but that’s the price we’re going to pay.”

He also said he supports the project because it will provide open space that the town won’t have to pay to maintain, such as with a park. The site is proposed to have a baseball field, softball field and 8,000-square-foot headquarters building. Price said four to five people will work onsite to handle day-to-day business, with volunteers assisting during tournament season.

The fields will host the annual Central Region championship tournaments, which consist of a 10-day event for baseball and weeklong event for softball. Thousands of people from across the 11-state central region are expected to flock to Zionsville for these events. Price said police will help direct traffic during the tournaments and that Zionsville Community Schools has offered parking space nearby. A shuttle is expected to transport guests from remote parking to the field.

The fields may also be rented out by local groups for various events.

The Zionsville Local Organizing Committee originally eyed a site owned by ZCS for the headquarters, but school officials struck down the idea.

“Our board made the decision last summer that an attempt to shoehorn all of the Little League Regional Headquarters’ needs at the foot of our County Road 875 property would compromise the current school uses of that property,” school board President Jane Burgess said. “Additionally, we saw that co-location would too severely reduce the flexibility needed for instructional facilities ZCS will someday need to place on the northern half of that parcel.”

The Zionsville Board of Zoning Appeals will meet May 9 to discuss several variances for the housing development, including reduced setbacks and perimeter street buffers and open space on an adjacent parcel. The town council will likely discuss the rezoning at its May 7 meeting.