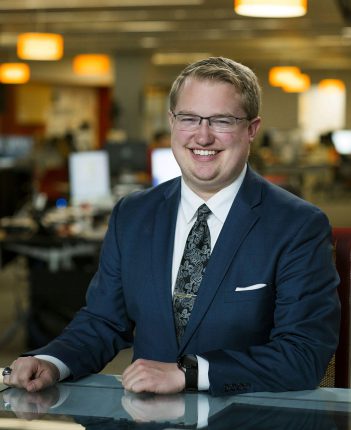 Tony Sandleben graduated in 2013 from Fishers High School where he participated in football, speech team, track and field and theater. Sandleben, 23, will graduate in May from Ball State University with a dual degree in telecommunications and journalism and a minor in political science.

Q: What was your favorite subject in high school?
A: Choir, because it was fun. I looked forward to it every day. (I) would go into the choir room and just make music with a bunch of my best friends. It was the first time that a class actually became like a family.

Q: What do you miss about high school?
A: I think what I miss most about high school, especially senior year, I had a pretty good grasp on my life at that point. I knew how to function throughout the day. I knew I had people that deeply cared for me and I had a sense of direction. I knew what the next six months were going to look like.

Q: What has your college experience been like?
A: I have been involved with student media all five years of college. That wasn’t exactly the plan, but here we are. I ultimately ended up taking reporting very seriously, to the point where I missed quite a good handful of classes because I was out covering stories. I knew it was what I wanted to do, and what was kind of cool about college was that my passions shifted from wanting to be a sports broadcaster to wanting to be a news reporter.

Q: What are your next steps?
A: My goal for my first job is to start in a state capital that’s in a market that’s in the top 100, according to the Nielsen ratings. While Indianapolis fits that, it’s way too big for a first reporting job.
I want to be a political reporter, so a state capital is really appealing to me because not just national politics, but state and local politics are really fascinating to me because they have much more of a direct impact on the community.

Q: Do you have any advice for younger students?
A: Get involved. Two of the best decisions I ever made in college (were) rushing a fraternity and joining student media because that’s where I met my best friends in college. Those two things have had such a deep impact on me that I would not be the person that I am if I didn’t do either of those things.

Q: Is there anything else you’d like the community to know?

A: One thing that I have always hoped to do is come back to Fishers High School and put a little bit of a mark on the high school media program.