You are at:Home»Current in Noblesville»Noblesville Community»Young girl cleans city’s streets, aims to pick up 100, 5-gallon buckets of trash

Olivia Herche has a unique goal for a 7-year-old: To clean trash from Noblesville’s streets.

She and her dad, Jason, began with their Arbor Grove neighborhood Feb. 4. They took walks and picked up trash and collected it in 5-gallon buckets. 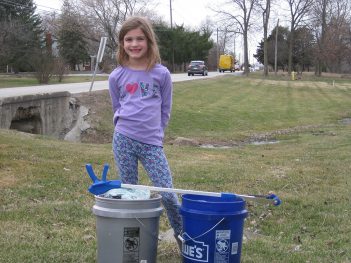 The trash collection mission expanded quickly, and now Olivia has a goal of collecting 100, 5-gallon buckets. She colors in a trashcan on a paper printout each time she fills a bucket. So far, she’s colored 33 buckets.

Jason said he and Olivia walk the streets on weekends and after she gets out of school at Stony Creek Elementary.

“I would take walks, and she wanted to come,” Jason said. “She saw all the trash and wanted to clean it up.”

Besides their neighborhood, Jason and Olivia also collect trash along the nearby Greenfield Avenue and other local areas. Jason recently applied to be an Adopt-a-Street sponsor for a section of Greenfield Avenue.

“We asked the city if there was somewhere we could dump all the trash because our bin kept getting full,” Jason said. “They said if we do the Adopt-a-Street program, they provide trash bags and gloves, and you can just tie up the trash bags and leave by the sign, and the street department will come by and pick it up.”

Spring Break is approaching, and Olivia said she wants to pick up 82 buckets of trash during her time off school. She and her dad also recycle items.

Her parent are proud of their daughter’s initiative.

“This is something we didn’t have to force her to do,” said Lindsey, Olivia’s mother. “She came up with it on her own, and she hasn’t gotten tired of it yet.”