You are at:Home»Current in Carmel»Carmel Community»Illustrating children’s book a dream come true for former Creekside teacher

Laura Grande Adams’ passion for art got a boost from a notable Indianapolis philanthropist.

“My (maternal) grandmother, Marilyn Glick, was always very encouraging of my art pursuits,” Adams said. “I would draw when we always went to their house for dinner on Friday nights. She said I had illustrator (ability) in me, so it was always in the back of my mind as a dream.” 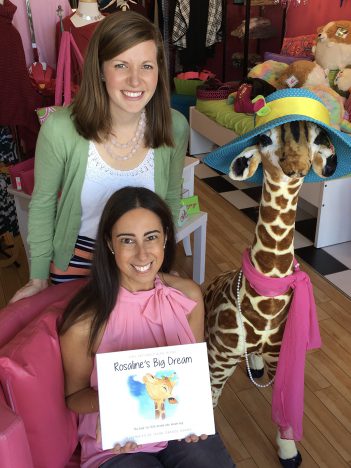 Glick, who died in 2012, was a huge patron of the arts along with her late husband, Eugene Glick.

Adams, who grew up in Carmel, taught art for a year at Creekside Middle School after graduating from the University of Dayton.

When Adams, a Brebeuf Jesuit graduate, worked as an elementary art teacher in the Detroit suburb of Grosse Pointe, Mich., a student’s mother, Gail Kachadourian Howe, was writing a children’s book. She told her son, Jack, she needed someone to draw pictures for her book.

“He said, ‘You should ask my art teacher, she’s a really good artist,’” said Adams, whose parents Tom and Arlene Grande live in Carmel. “So, that’s what she did. I had never illustrated a book, and that’s not really my background in illustration. It’s always been a dream of mine, and I’ve always had a love for children’s literature.”

The book, “Rosaline’s Big Dream,” was self-published in October 2015. The book is about a fun-loving giraffe with big dreams and friends from the zoo.

“Gail had worked for a magazine publication, so she was a writer but had never written a children’s book before,” said Adams, who moved to Traverse City, Mich., in the summer of 2016. “The publishing world was new for both of us.”

Adams said they did several school visits and book signings.

“It was doing well (in sales), but we took a minute to pause, realizing that self-publishing and marketing requires a lot of time and energy,” Adams said.

Adams is staying home with sons Dylan, 5, and Declan, 3, and daughter Catherine, 1. Her husband, Andrew, is a physician. She said she would like to do more illustrating.

“I met a children’s author who lives in Traverse City,” Adams said. “I hope to learn more about the self-publishing world. It’s kind of an interesting time with social media to be self-publishing. There are a lot of opportunities if you are willing to put in time for marketing and those things.”