You are at:Home»Current in Fishers»Fishers Business Local»Some Like it Hot expands to Market District, Piazza produce

Some Like It Hot began as a small Fishers Farmers Market operation the summer of 2016, but co-owner Elaine Salgado soon realized there was a market for tamales and salsa. 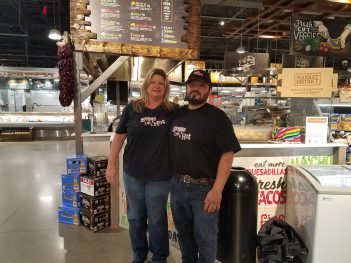 Elaine and Fernando Salgado are the owners of Some Like It Hot. (Submitted photo)

“We wanted to see if there was a market out there for tamales and salsa, and within the third week of us being at the farmers market we started selling 500 tamales and 1,500 ounces of salsa in four hours on Saturdays, and we capped it at that,” Salgado said.

The recipes are her husband Fernando’s, who hails from Mexico. The couple lives in Noblesville.

“He loves to cook, which is why people were trying to convince us to start a restaurant, but we said no, we don’t want to be tied down, so the farmers market was a good alternate,” Salgado said.

Some Like It Hot is a part of Indiana Grown, which connects retailers with locally grown items. A food broker called the Salgados, and Some Like It Hot has started to expand. It will now be sold at Market District in Carmel and is distributed through Piazza Produce.

“Market District tried our food, and in the same meeting, they said this is what we want,” Salgado said. “That was just within the last month.”

The Salgados have set their goals higher. They want to distribute across the state and possibly the nation. To do so, Some Like It Hot must operate out of a commercial kitchen, which the Salgados are in the market for.

Salgado encourages other small business to not be afraid to take the leap in order to grow.

“Take advice from other people, be willing to have an open mind and keep working hard and take that scary step,” she said. “It’s hard. It’s hard to let go of a full-time job and just plunge into it, into the unknown, but you can’t make it if you don’t (try). It’s scary, but it’s thrilling and really exciting, and right now it’s paying off.”