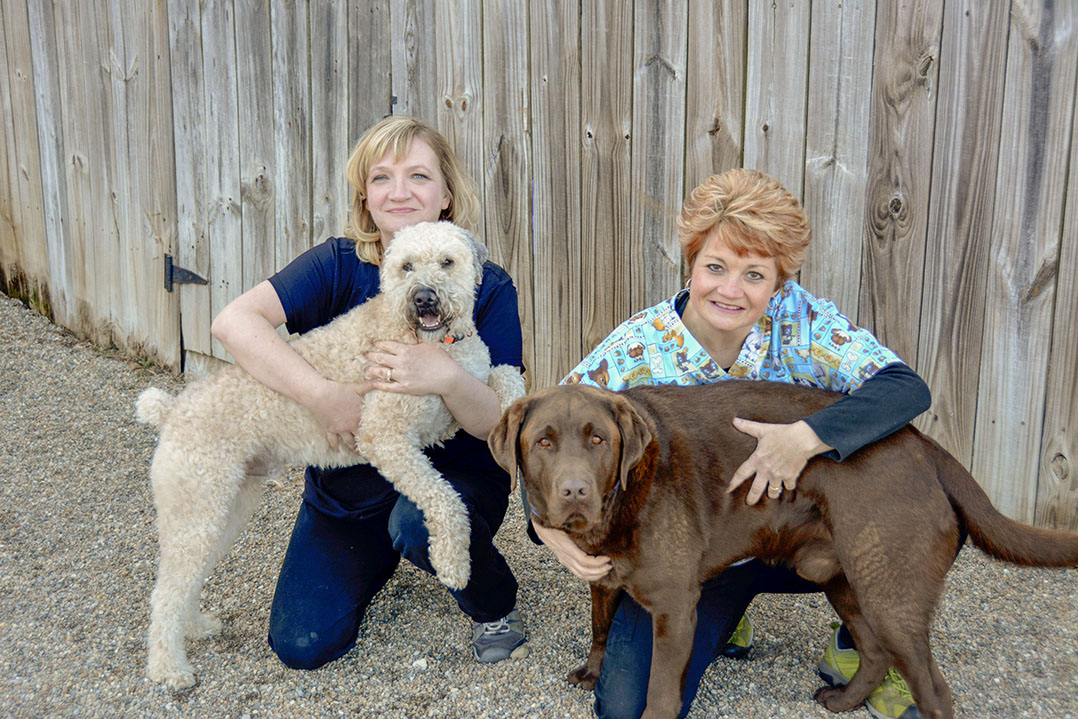 In the lobby of Positively Canine hangs a sign that reads, “This is Our Happy Place.” The sign was the first item installed by the new owners and conveys the essence of their business to staff and customers.

When Hinchee and Lori Fricks bought Positively Canine in September 2017, they had many plans for the cage-free dog facility that offers day care and overnight boarding.

They quickly remodeled the lobby and created a separate “sensitive souls” room for  senior and smaller dogs, which averages five pets per day with space for more. They added and updated doors and gates in the 8,000 square-foot building to ensure the pets’ protection.

This spring, the owners plan exterior facelift, new fence, new landscaping and an expanded exterior area for the dogs behind their Zionsville Road building.

The changes aren’t merely cosmetic. As a canine behavior expert, Fricks noticed that previous practices weren’t ideal for dog and human safety. They have changed the way overnight boarders are fed; they require dogs to be patient before being integrated with the other dogs in the morning; and trained the dogs must wait before moving from room to room to avoid over-crowding the door.

“Over the course of time we have trained probably thousands of dogs, but training 35 of them at once was a new skill,” said Fricks, a Cicero resident.

Customers have expressed appreciation for the cosmetic changes but are more grateful that their dogs receive good care.

“They say, ‘The dogs don’t care what it looks like,’” said Hinchee, a Noblesville resident.

The cage-free dog day care has been through a lot in the past year.

Formerly named For the Dogs by founder Ray Bridges, the name was changed after Bridges was arrested last year for allegedly videotaping a coworker in the bathroom. The business was sold to Sharra Christine, who wanted to implement some of the same changes Hinchee and Fricks recently completed, but the job proved to be too much for one person. Christine was in search of someone to take over the business at the same time Hinshee and Fricks were trying to create a similar facility in Westfield.

“It was perfect timing,” Hinshee said.

“This is not a one-person job,” Fricks added.

During the first three months, Fricks and Hinchee each worked 16 hours a day, seven days a week. Adding new staff members has allowed them to cut back to 12-hour days, six days a week.

“The clients have been through a lot of change,” Fricks said. “They understandably looked at us with a little skepticism.”

Adding new staff trained in understanding canine behavior has been crucial to the comfort of dogs and clients.

“The people who really shine here are those who view dogs as a peer group,” said Fricks, adding that sometimes the dogs help in the interview process by showing their preference.

Hinchee said it takes a certain temperament of dog to stay at Positively Canine. Dogs range in age from a minimum of six months to senior dogs in all sizes and breeds.

Dogs that are easy to redirect are ideal clients.

“Basically, they have to be savvy socially,” Fricks said. “Are they able to calm themselves back down?”

Each dog is evaluated for temperament before they’re allowed to stay at the facility. New canines start with a one-hour evaluation conducted by Fricks or Hinchee. Dogs approved in the initial evaluation return for a complimentary four-hour trial to see how they react with a large group of dogs. Dogs must complete a single overnight visit before staying for longer periods.

On average, Positively Canine serves 35 dogs per day when it’s not a holiday. 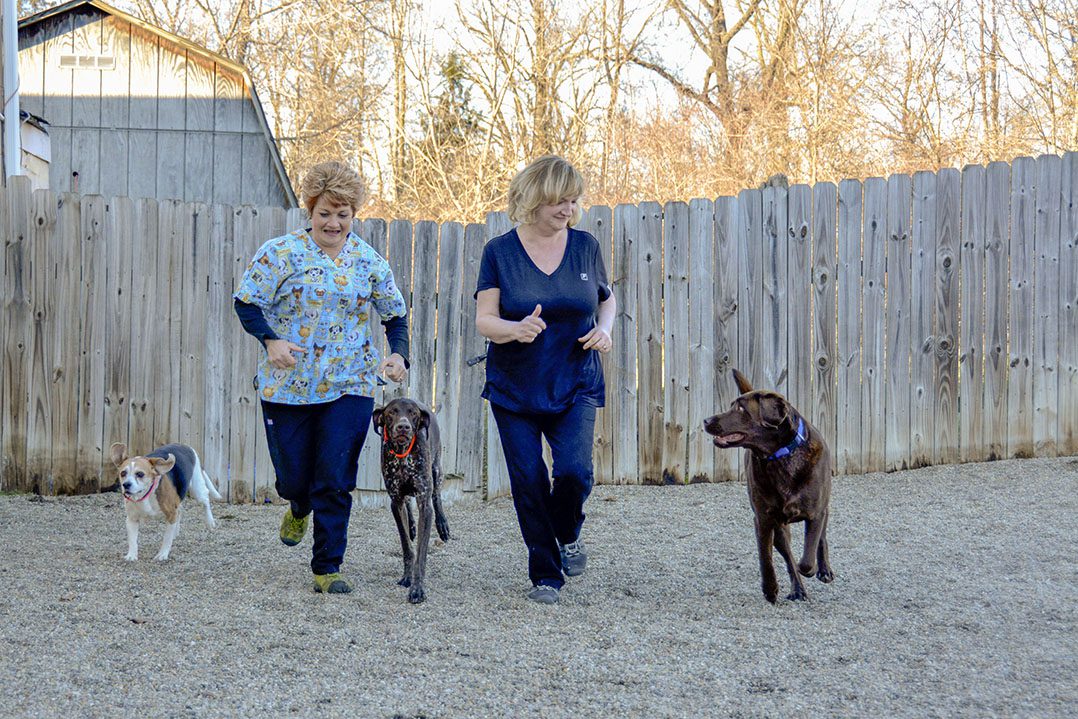 Fricks has been training dogs since the age of 12.

“It was an all-consuming passion to learn to understand their behavior and communicate with them,” she said. “I’ve spent my entire life doing it.”

The owners met at the Humane Society of Hamilton County, where Hinchee was a volunteer and Fricks was a behavior specialist and foster coordinator.

“Our passion is behavior and fixing those dogs that are unhappy,” Fricks said. “Sometimes, we’re their last hope.”

Fricks and Hinshee started Positively Canine four years ago in Westfield with canine classes and private behavior sessions. Although they still offer in-home counseling and lead six-week adult and puppy classes, they have more plans for Positively Canine.

“We know what this can be,” Fricks said. “We have a purpose, and we’re going to get there.”

One of the first goals Hinchee and Fricks had for the facility was to remove all of the couches the dogs used for rest and play.

When the couches disappeared, they realized their canine clients missed them. So couches were brought back and are replaced every few months.

“If we could find a way to get rid of the ones that we get rid of, that would be great,” Fricks said.

Hinshee said that has been the biggest challenge of owning the business.

“If they’re sleeping on the couch, the other dogs leave them alone. It’s an unwritten rule, you play on the ground, you sleep on the couch,” Fricks said. “It’s what this place is known for, and I’m not taking that couch away from somebody’s dog.”

The worn-out couches are piled in the back of the building until Hinchee and Fricks can figure out how to transport them for proper disposal. They are debating whether to buy a truck to facilitate couch removal. 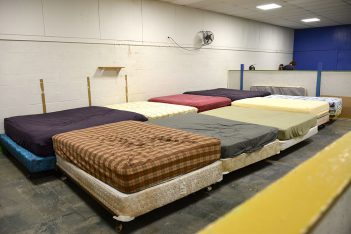 Positively Canine has mattresses available for dogs who stay overnight.

Previously used playhouse equipment also is used by the dogs both indoors and out. Some overnight lodgers utilize mattresses, which don’t need to be replaced as often because they’re not as frequently used.

Hinshee and Fricks welcome donated mattresses and tear-free couches that aren’t sleeper sofas or recliners, if they can be delivered to Positively Canine and the owners are notified ahead of time.

“The dogs just want their couches and the humans and their friends,” Hinchee said.