You are at:Home»Current in Carmel»Carmel Community»Carmel Clay Historical Society exhibit documents impact of World War I 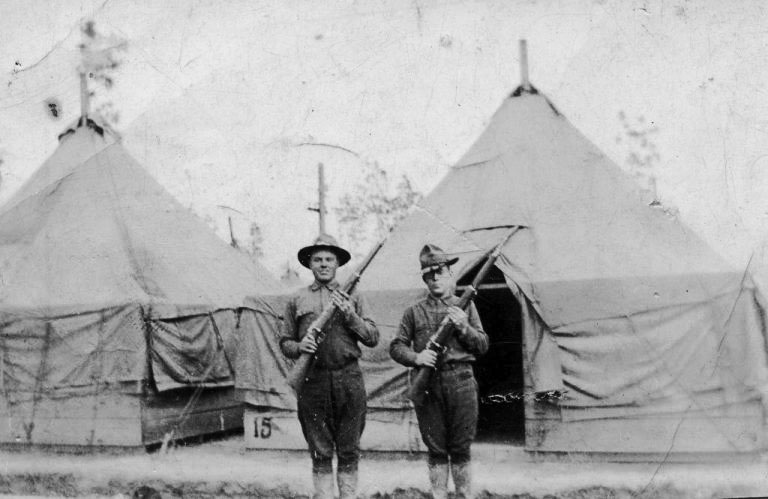 Earl Mills, right, a Carmel resident who served in World War I, pauses with an unidentified soldier. (Submitted photo)

The Carmel Clay Historical Society will host a new exhibit April 14 to May 13 called “The Great War: From Ration Lines to the Front Lines.”

“We have borrowed a traveling exhibit from the Indiana Historical Society that is called ‘The Great War,’” said Emily Ehrgott, CCHS executive director. “It will showcase the way the war affected not only the people serving in the war but the people here in Indiana at the time.”

Artifacts will be on display that have a local tie.

“We’ll also be highlighting a few items that we have from our collection, such as a Word War I uniform that was worn by a Carmel resident that went to war,” Ehrgott said. “We also have a spent shell casing that was made into a lamp. A lot of times they took war trash and re-purposed it. We do that a lot now, but back then that was pretty forward thinking. The lampshade was hand-painted by Franklin Booth, who was a Carmel resident.”

There also will be artwork of the era on display.

“Some of the artwork that was popular around World War I, the Uncle Sam ‘We Want You’ and ‘Rosie the Riveter’ posters, will be on display. The exhibit will discuss what they were about and why they are so important now,” Ehrgott said.

The exhibit will include information on the impact the demand for steel had on cities in Indiana and how rationing affected residents.

“We’re also having Jim Corridan from the Indiana Archives Records Administration do a lecture on April 12 at the library, and he’s going to expound on how the war affected us in Indiana versus the world and the country,” Ehrgott said.

The events are free but a donation is appreciated. For more, visit carmelclayhistory.org.