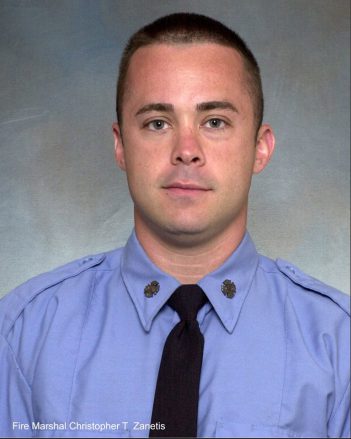 Mayor James Brainard has declared today, March 29, 2018, as “Christopher Tripp Zanetis Day” in honor of the Carmel native and Carmel High School graduate who was tragically killed at the age of 37 in a military helicopter crash along the border of Iraq and Syria on March 15. Zanetis was serving on a search and rescue mission at the time of the crash.

Mayor Brainard has ordered all city flags to fly at half-staff today and has issued an official proclamation in honor of Zanetis. In addition to his service in the Air National Guard, Zanetis was a heroic firefighter and Fire Marshal in New York City and had recently graduated law school.

“This was a tragic loss of a true hero who had served his country in many ways. I am asking the community today to join me in honoring Tripp and in extending our condolences to his family and friends,” said Mayor Brainard.

Zanetis was a 1999 graduate of Carmel High School, where he was on the high school diving team and the Ambassador’s show choir before leaving for college and his career as a firefighter and helicopter pilot in the military. Read his complete obituary here.