You are at:Home»Current in Zionsville»Zionsville Cover Stories»It takes a Village: Downtown business owners help each other succeed 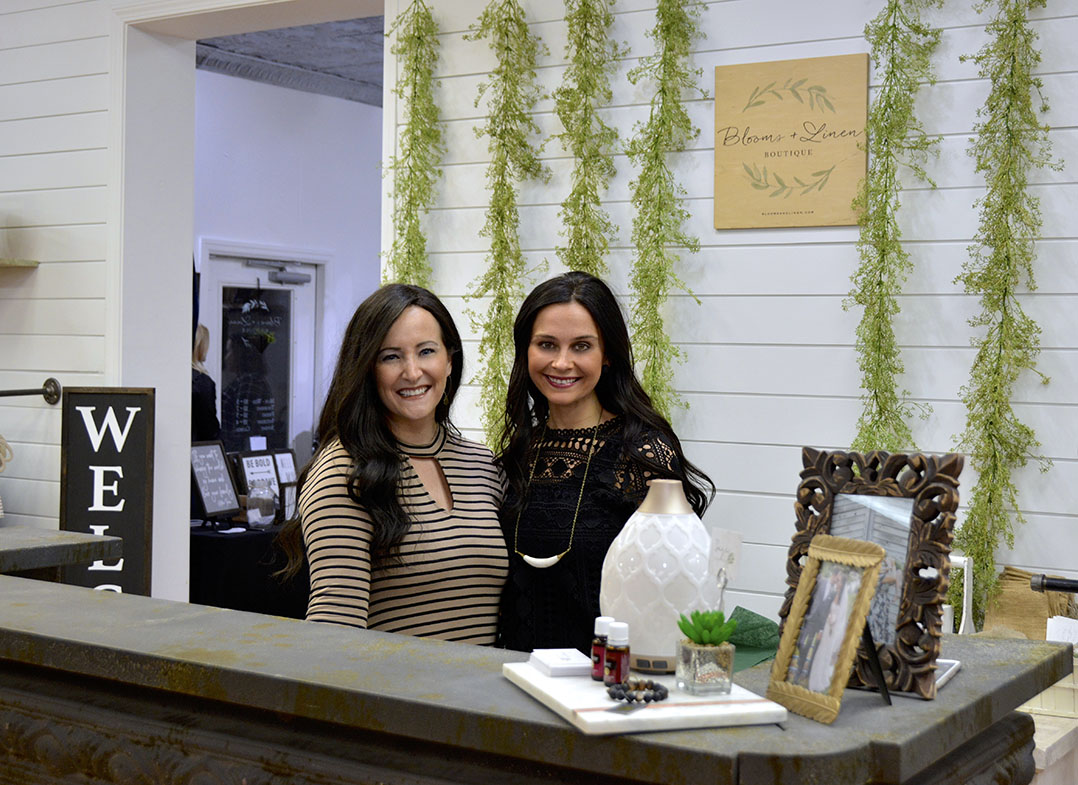 Blooms & Linen owners Stefanie Childs and Lindsay Lyon pause at a Girls Night Out event they organized in part to promote other local businesses. (Photo by Lisa Price)

Encouraging other small business owners is a mission for the owners of Blooms & Linen.

“We’re really big into helping and supporting other female businesses and entrepreneurs,” co-owner Lindsay Lyon said. “We don’t want to be just about ourselves.”

The women’s clothing store’s owners Lyons and Stefanie Childs created Shop and Sip events before they had a retail space as a way for clients to try on clothes in a party setting. It wasn’t until Blooms & Linen moved into a large retail location on Pine Street that their ideas evolved to include more business owners.

“That’s always been our heart, to help our friends that are doing the same thing we are. We know it can be challenging. We’re just really grateful we have the space now that we can do that,” Lyon said.

Empowering other businesses is not unique to Blooms & Linen. Businesses working together has become a common thread in downtown Zionsville.

“I don’t know if I’ve ever come across a merchant in town who didn’t want to help somebody else’s business,” said local photographer Giovanna Mandell, who has lived in Zionsville for 22 years.

When Mandell noticed that the clothing promoted on Lesley Jane’s social media page was worn by young models, she suggested a photo shoot using a variety of local volunteers of various ages, recruiting Zionsville Beauty Counter owner Ellie Brown to do the makeup.

“It gives me great joy to see other people’s business thrive,” said Mandell, who started a private Facebook page for female photographers to share resources and ask questions.

Mandell said the connections are a great way for each business to bring their strengths together to improve Zionsville.

“It’s taking different segments of business and putting them together,” she said. “There are so many ways for small businesses to collaborate and share resources to build one another up.” 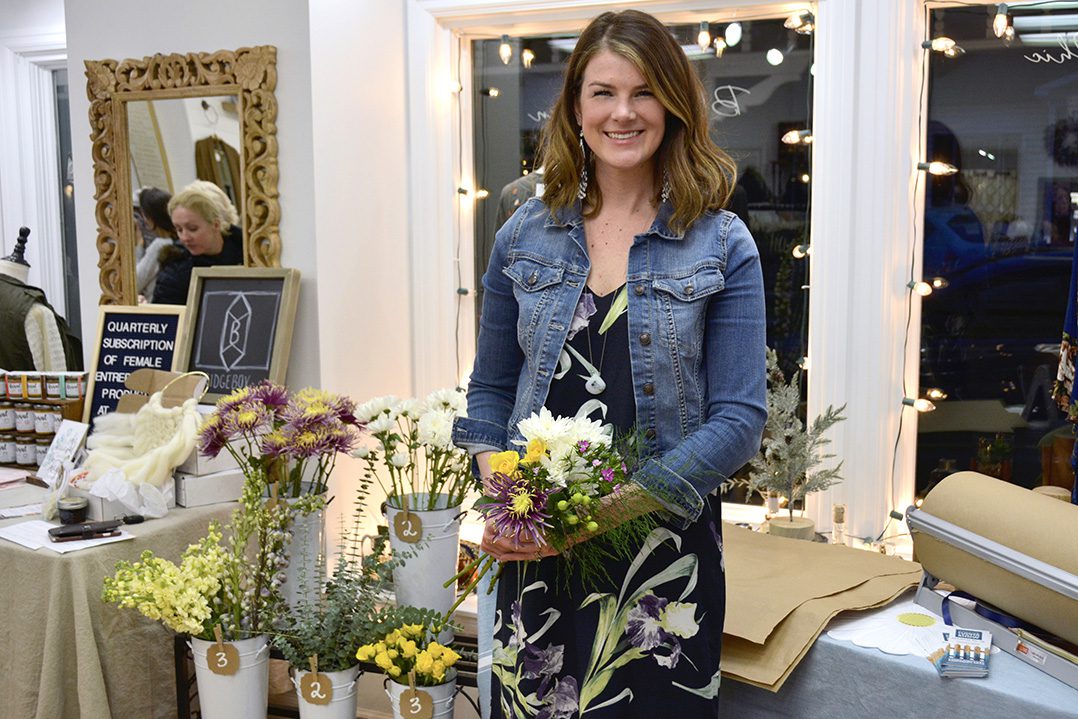 Katie Conway of Stems Flower Truck displays a bouquet at an event at Blooms & Linen to promote women-owned businesses. (Photo by Lisa Price)

The power of networking

The first Blooms & Linen Girls Night Out in November 2017 featured a variety of businesses from Indianapolis and surrounding areas. In February, the theme centered on women who make their own products, such as art and nut butter.

“We want this to be a place where people can promote their business, too,” Lyos said. “We want to help other people.”

Gray Violet Weaving was one of the businesses that participated both evenings. Owner Danielle Ewing, a Zionsville resident, creates handmade woolen wall hangings, a business she started last year.

Ewing soon learned the power of networking. She said surrounding herself with strong people going through the same experience has helped encourage her to continue.

“Surround yourself with people who are on the same journey as you,” she said. “Watching Stefanie (Childs) and Lindsay (Lyon) has been really empowering. Here’s two young girls, and they were able to come into this town and be really successful.”

Through the Girls Night Out, Ewing also made a connection with Bridging Herstory, a company that sends four boxes each year to customers filled with items handmade by female entrepreneurs. Ewing made 170 weavings to be included in the boxes.

Because of her success with connections so far, she’s been encouraged to continue networking and dive into social media.

‘A sense of community’

When Cobblestone closed for renovations last year, its owners partnered with the owners of Bites by Confectioneiress to offer a string of pop-up dinners and cocktails in part to test new menu items.

“Creating a sense of community between the business owners helps in cross-promoting each other,” said Victor Gosnell, co-owner of Bites.

Gosnell said it wasn’t until Bites opened a location on Main Street three years ago that he began to explore partnership opportunities.

“That’s when I started to build more relationships in the village,” he said, adding he’s enjoyed being in Zionsville more by building business friendships.

“I think we all grow together. The better that they do, the better I do,” he said. “We’re all going to be more successful together than on our own.”

He said he will suggest Zionsville businesses to customers based on their preferences or questions.

“I feel like we’re an entryway to the Main Street Village of Zionsville,” he said.

This winter Gosnell partnered with Rush on Main on National Margarita Day to provide a taco bar paired with Bites margarita and tequila options. Gosnell said he’s in constant but casual communication with other business owners to find ways to work together.

“I feel like most people genuinely like each other. In the last five years people have stepped out of the shops and started talking a lot more” Gosnell said.

“It’s been a lot more fun and a lot more beneficial to take the time to get to know everybody,” he said. 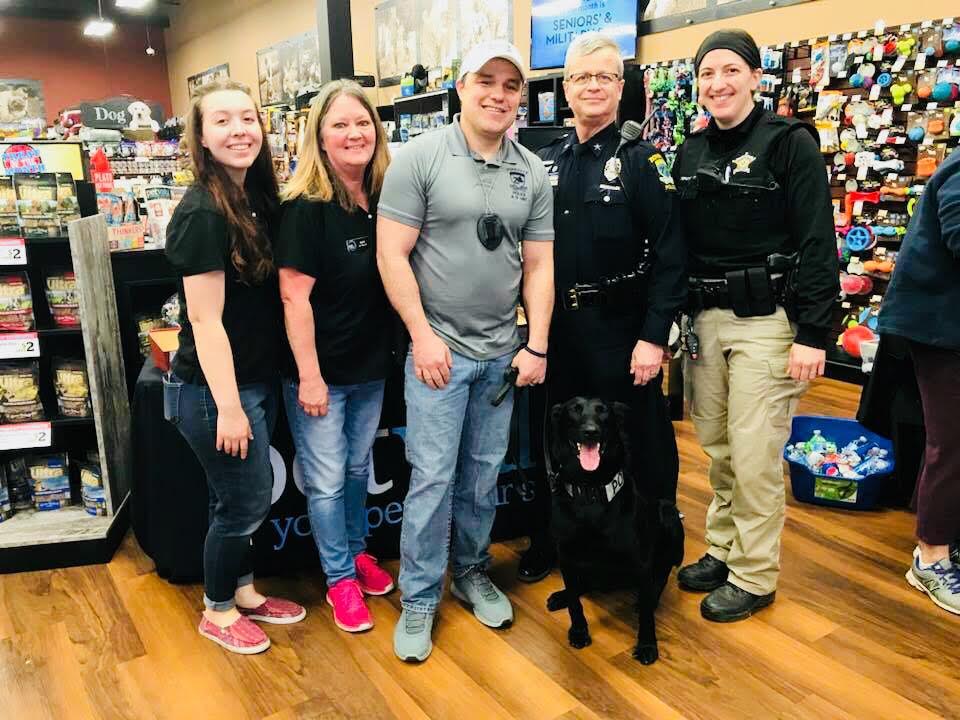 Besides helping one another, local businesses are often quick to help the community. In the past few weeks, many have organized fundraisers for the family of Boone County Sheriff’s Office Deputy Jacob Pickett, who was fatally shot in the line of duty March 2.

Rush on Main co-owner Johnny Vargo coordinated a fundraiser with four other Zionsville establishments on St. Patrick’s Day to donate to the family. Rush, Salty Cowboy, Cobblestone, Noble Order and Bites donated 10 percent of profits that day will to the family. Several thousand dollars were raised.

“They give so much to our community, it’s a small way to give back to them,” Vargo said.

It’s the first time the five restaurants have simultaneously raised money for a cause, but Bites co-owner Victor Gosnell doesn’t think it will be the last.

PetValu raised $5,100 that weekend in a celebration of the K-9 officer’s life through dog washes and raffles. Boone Village businesses such as Books and Brews, Akard True Value Hardware and Subway donated items for the raffle.

“I just felt I needed to,” said PetValu store manager April Carlton, who organized the event.

Carlton had originally planned to hold a birthday party for Zionsville K-9 Jelka, whose partner suggested shifting the focus to honor Pickett.

Fundae’s ice cream shop raised $3,100 for the family before officially opening in mid-March, and Kern Brothers donated a portion of a day’s sales to the family.

“It’s humbling, but it’s also so uplifting to see how people are supporting this family,” Zionsville Chamber of Commerce Events Manager Tracy Coussens said.  “This type of thing is happening all the time, but people don’t realize it.”

Donations to the Jacob Pickett Memorial Fund are being accepted at all Key Bank locations.