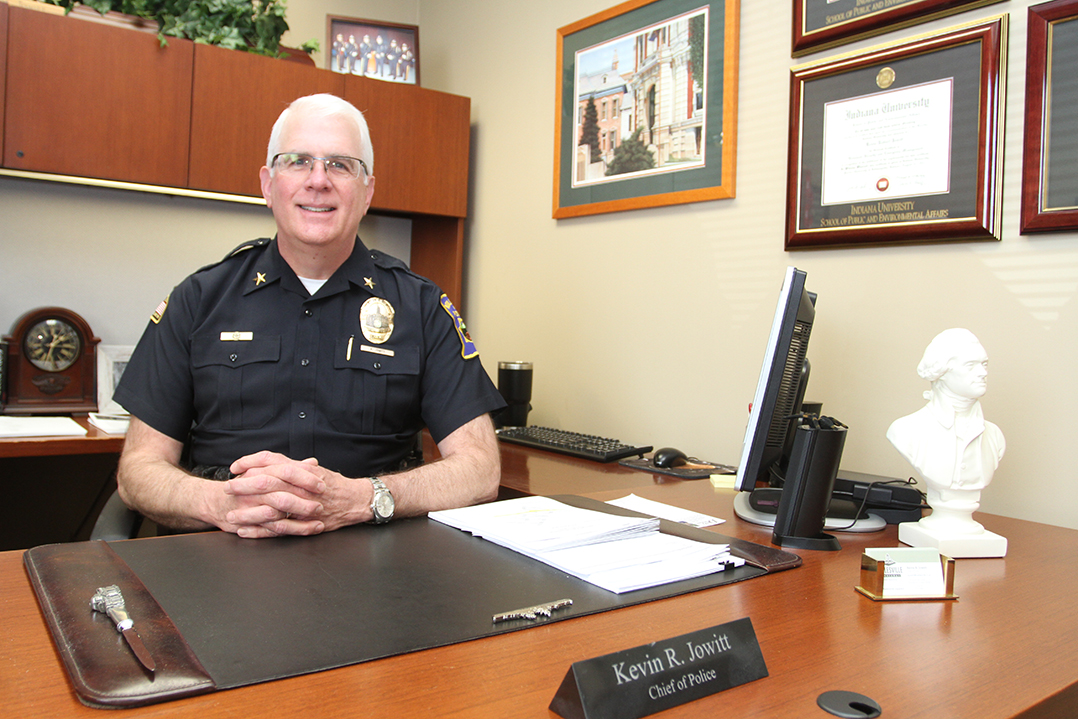 Since becoming chief of the Noblesville Police Dept. in 2009, Kevin Jowitt has overseen numerous changes, primarily in the way policing is done.

His work has caught the attention of others, as Jowitt was recently recognized by Gov. Eric Holcomb with the Distinguished Hoosier Award for his service to the state. He was nominated by his peers at the Indiana Association of Chiefs of Police, which he joined in 2008 and served as president of last year. 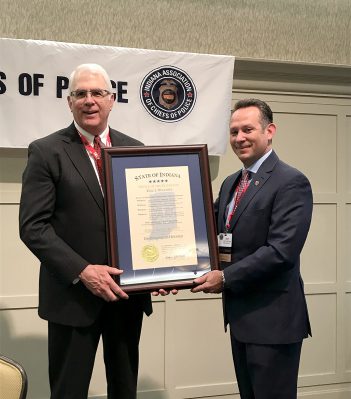 “It was a huge honor to get that award. The nomination came from the Chief’s Association, which is one of the reasons it meant so much to me (because) it was presented by peer police chiefs,” Jowitt said. “It’s a phenomenal group. They’re great people. That recognition from them just meant a lot to me.”

“He’s very progressive. He’s an innovator in law enforcement, not just his own agency but across the state, and he’s professional,” Dombkowski said of Jowitt. “He promotes training and education through the association like no president has beforehand.”

Prior to serving as chief of NPD, Jowitt was the Westfield Police Dept. chief from January 2008 to May 2009.

“I’ve lived in Noblesville for 34 years now. So, Noblesville is home,” Jowitt said. “Some people expressed some interest in me becoming the Noblesville chief of police, so I interviewed for that position and was chosen by Mayor (John) Ditslear and came here in May 2009.  I loved working in Westfield, but Noblesville is home, so I’ve been here ever since.”

When Jowitt joined the NPD, he said it was “an excellent department with good people” but operated under Midwestern traditions which, according to Jowitt, was more of a reactive style of policing.

“Over the last nine years, we’ve changed the game up at Noblesville,” he said. “We started out emphasizing community-oriented policing. We started small with that, but it’s a very different approach because it’s oriented toward solving a problem as opposed to dealing with an incident. It allowed us to go outside the box and deal with issues for people that are not traditional policing issues to try to help them.”

In addition to implementing a community-oriented policing model, Jowitt also has overseen the development of NPD’s participation with initiatives such as Coffee with a Cop, National Night Out, citizen’s academy, a Crimewatch Program, a police explorer’s post and an increased social media presence. A Problem-Oriented Policing Team and a three-officer traffic unit were established. In July 2017, a Crime Analysis Unit was created.

“When the bulk of response is officers in patrol cars, the nature of police work doesn’t allow these guys and gals time to focus on a particular problem,” Jowitt said. “The responsiveness needed in patrol doesn’t lend well to problem-solving. The POP team and traffic idea was to give officers the time and resources to deal with other problems.”

Jowitt also oversaw the creation of a district policing program, where an officer is assigned to each neighborhood in Noblesville. That officer serves as a liaison between the neighborhood and the police department.

Throughout his 42 years in law enforcement, Jowitt said the most important thing he’s learned is to be kind to people. He also places importance on the mental and physical well-being of the 82 officers who serve with NPD.