Claire Kauffman has portrayed other orphans in three previous productions of the musical ‘’Annie.’’ Now, she’s getting her chance to play the title role. 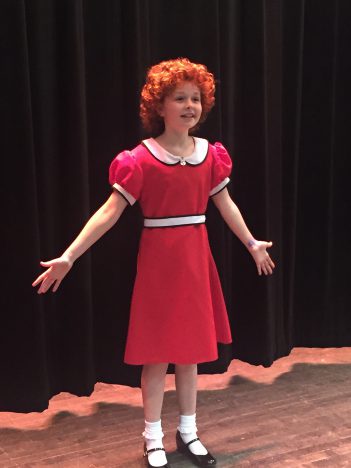 “I’ve watched ‘Annie’ for a long time, and now I finally get to actually be the character,” said Kauffman, who will join a cast of 73 fifth- and sixth-graders at Zionsville Middle School.

This is the first time the school’s musical, set for March 23-24, is limited to two grades. The seventh- and eighth-grade students performed a fall play and will assist the younger students backstage for ‘’Annie Jr.’’

“It gives the fifth- and sixth-graders more opportunities to be able to have those lead roles,” said choral director Ali Moody, who is directing the middle school’s musical with her husband, Jordan.

Having the chance to direct ‘Annie Jr.’ means a lot to Moody, who was in the show as a child and feels story, set during The Great Depression, is a great way to introduce American history to students.

“It’s always been near and dear to my heart,” Moody said.

The junior version of ‘’Annie’’ has shorter songs and omits a few scenes to be more accessible to younger students. Learning a different version of the show is among the challenges facing Kauffman, who was ready to dive into the role.

“She’s so intuitive about who Annie is,” Moody said. “It never takes her a moment to think about it, she’s just right in. That, I find you can’t teach very quickly.”

Kauffman said performing with her friends has been fun, but she remains focused.

“I’m still acting as professional as I can,” she said. “I finally get to sing ‘Tomorrow.’”