You are at:Home»Current in Fishers»Fishers Cover Stories»Cultivating the city: Mayor Scott Fadness presents State of the City, announces AgriPark concept 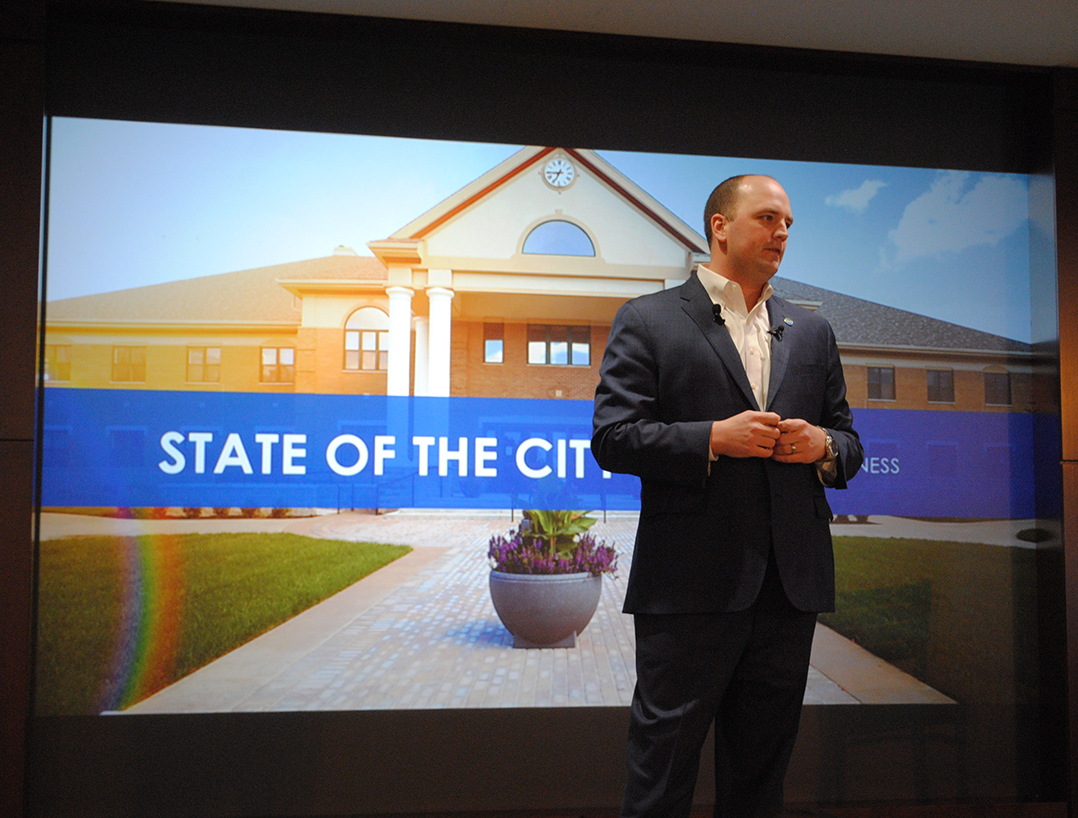 Fishers Mayor Scott Fadness presented the annual State of the City March 14 during the OneZone Commerce luncheon. But instead of taking the traditional approach of summarizing the year’s economic development, he announced a new concept called AgriPark and  announced a unique partnership between the city, community and schools. He also recognized employees and updated attendees on projects such as Geist Waterfront Park, Spark!Fishers and the Nickel Plate Amphitheatre. 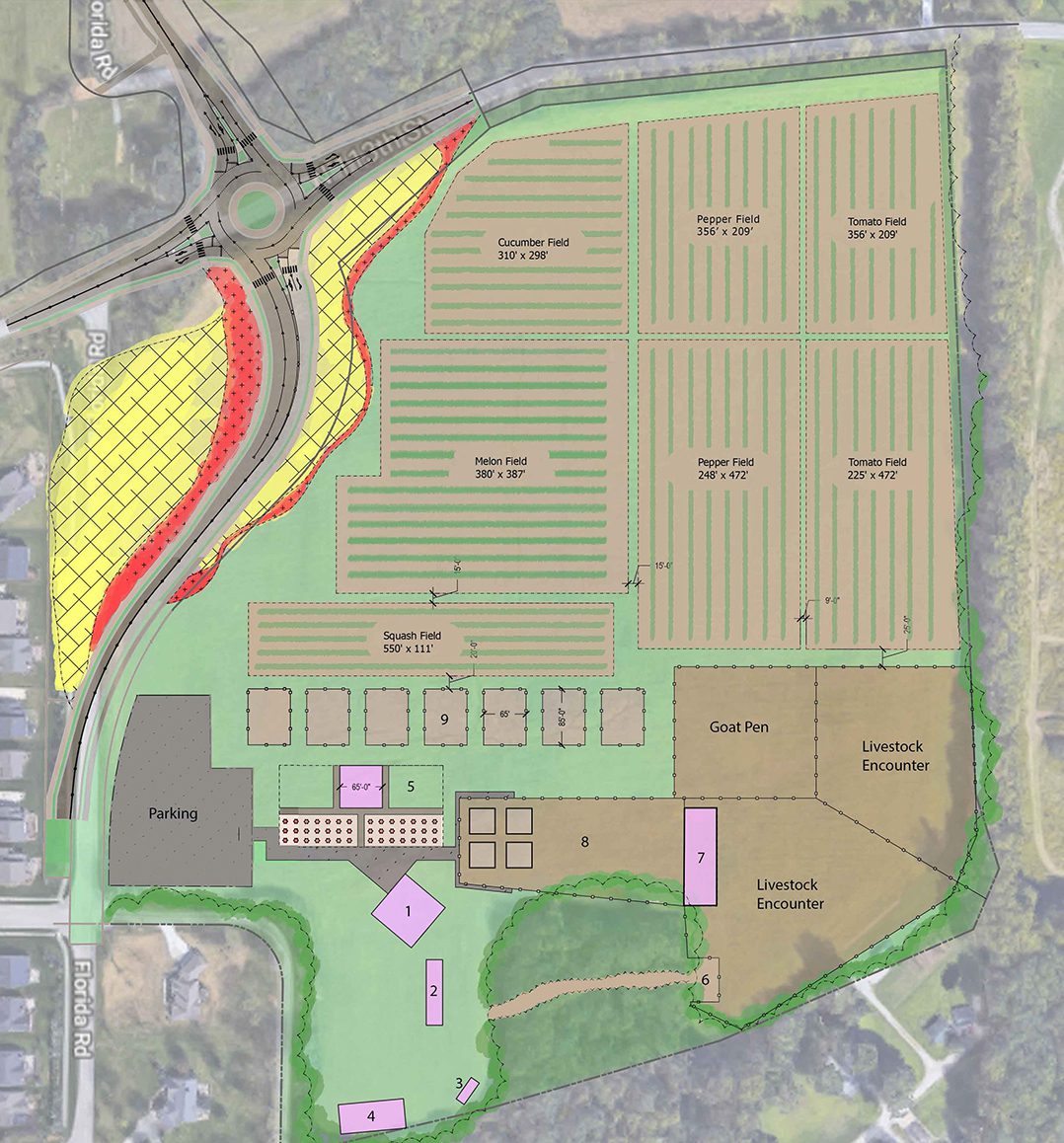 A rendering of the AgriPark. (Submitted rendering)

Having grown up on a farm, Fadness knows the benefits to growing and harvesting crops, tending livestock and operating farm equipment. A new concept will bring some of the aspects of farming to a 32-acre park in Fishers. According to Fadness, it will be the nation’s largest AgriPark. 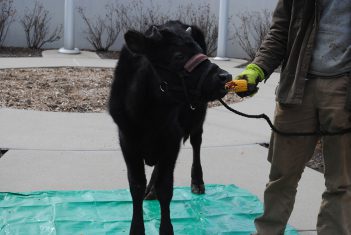 Walter the cow was on display after the State of the City for attendees to learn more about the AgriPark. (Photo by Anna Skinner)

“This will be a park where instead of the traditional soccer and baseball fields, it is a working farm,” Fadness said. “People sign up and come out and work on this farm to produce vegetables, livestock, you name it. Ultimately, that produce gets sold at a market. It is a true working farm. We think this will be a really dynamic and interesting addition to our current park system.”

The park will be operational this summer and will be located at 113th Street and Florida Road.

Fadness said the farm will benefit young people and the community as a whole.

“The ability to experience this for the next generation and for children to go out and experience what it’s like to work the land and see how farming culture occurs is a unique and dynamic addition to our park system,” he said.

The park will be operated by Brandywine Creek Farms. Some of the produce will be donated to the Good Samaritan Network for Hamilton County and food banks. 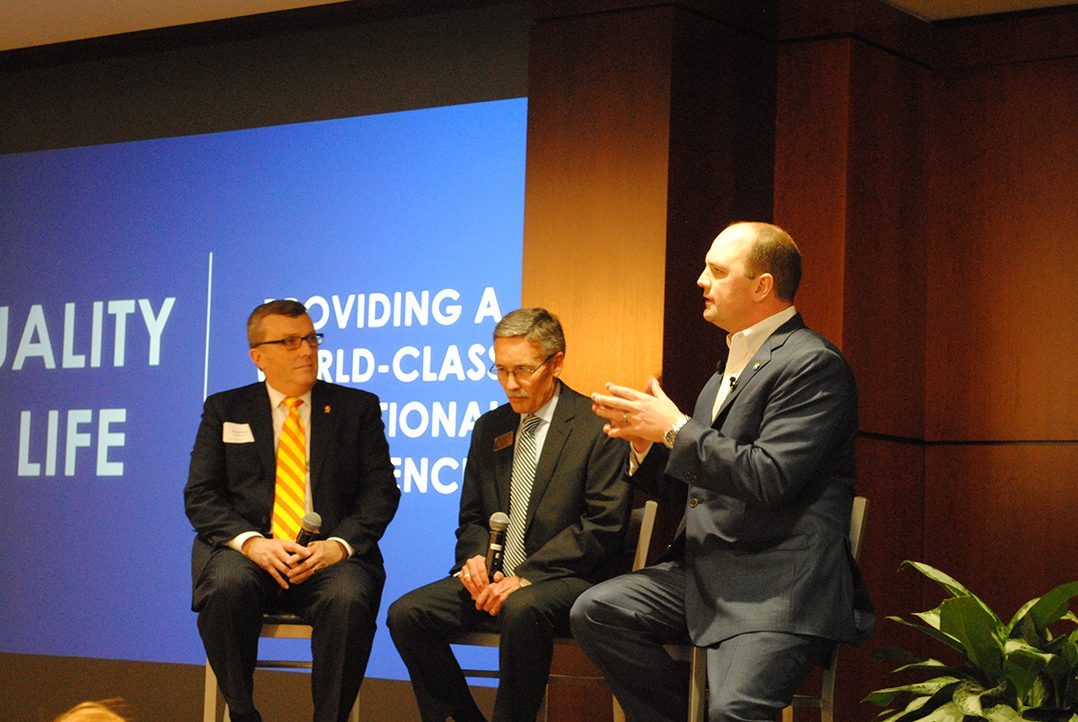 Fadness spent the last half of the State of the City with Hamilton Southeastern Schools Supt. Allen Bourff and Conner Prairie CEO Norman Burns. They talked about a city-wide campus concept targeting students in grades K-12. Discussions for the collaboration in uniting the city toward one goal on multiple fronts began two years ago. Conner Prairie will serve as the nonprofit template for the program, but Bourff asked other nonprofits and businesses in the private sector to consider participating.

“What I’m suggesting right now is that you, as business leaders in the community, think about how we might engage you in getting our younger students out into your businesses,” said Bourff, noting hospitals as an example.

“Conner Prairie will not be the only nonprofit, but it will be the template for this model,” Burns said. “We want to engage the whole community and be a city-wide initiative where students can get out and enjoy nonprofits.” 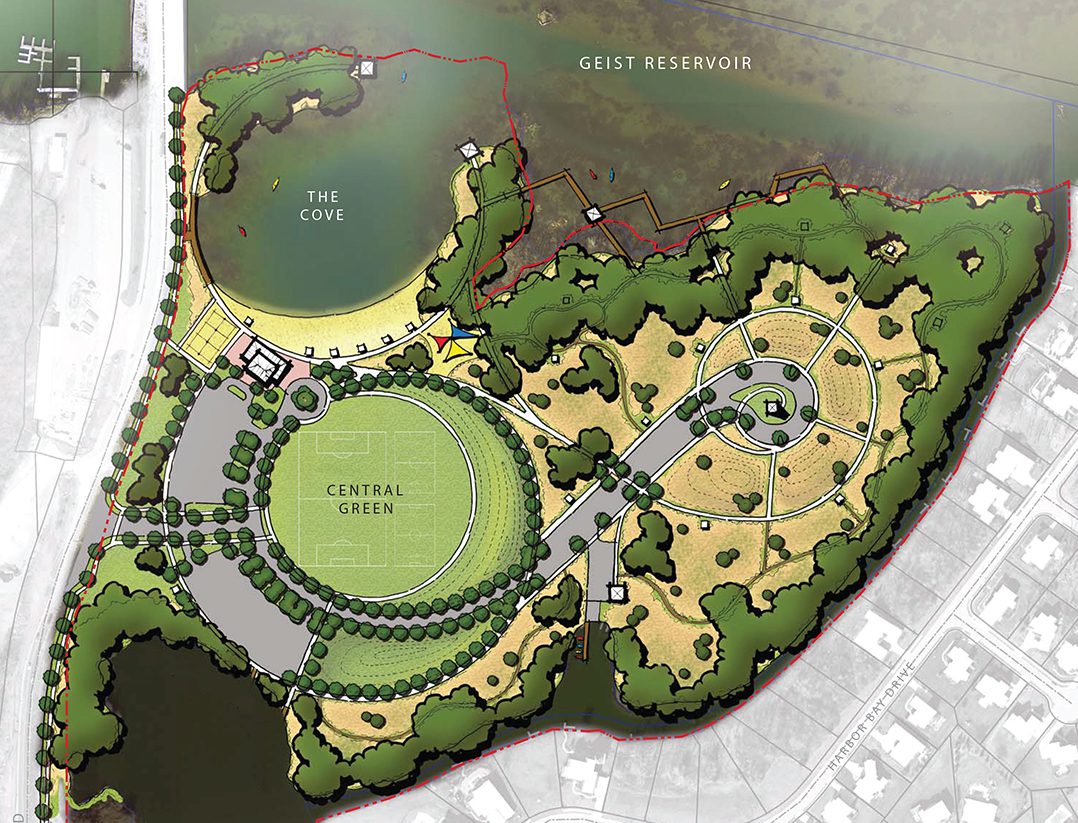 A rendering of the Geist Waterfront Park. (Submitted image)

The 70-acre Geist Waterfront Park will soon be completed as well.

“All residents in Fishers will have the opportunity to experience the unique amenity that is Geist,” Fadness said.

Fadness didn’t talk much about Spark!Fishers other than to say 100 community members are now involved in the project. He said traditional celebrations such as fireworks and the parade will remain, but some new ones will be added to the Fourth of July festival.

“We will look to the future for new ideas and concepts, so stay tuned for more about Spark!Fishers,” he said. “I look forward to a wonderful event in June.”