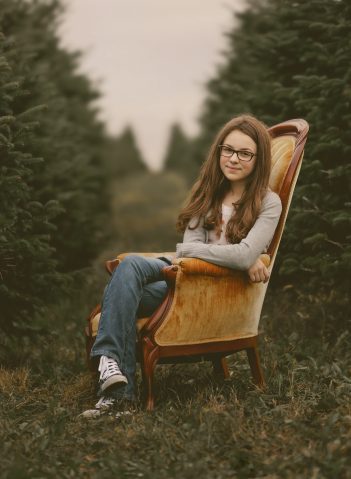 Lilly’s mother, Jen, said that experience helped shape her daughter’s future. Lilly has been a Girl Scout since kindergarten.

“Ever since she was younger she has loved books,” Jen said. “She would go to the bookstore and get excited over someone getting a new book.”

Jen said Lilly often wrote her own stories throughout childhood, and even started an Itty-Bitty library with her Girl Scout troop at Carey Ridge Elementary School.

While Jen was in the neonatal intensive care unit with twins, Lilly was just getting started on her upcoming book.

“She wrote this book when I was in the hospital,” Jen said. “She was only 10 at the time.”

The book, titled “Dr. Dawn Poseidon,” is a 39-page children’s drama and mystery and depicts Dr. Dawn quitting her job as a doctor and being traumatized, but it’s what happens later when she receives a phone call from the hospital that remains the mystery.

A featured book signing with other local authors will take place at Barnes & Noble in Westfield, 14790 Greyhound Plaza, from noon to 3 p.m. March 24. Copies of the book will be available for purchase.

“Lilly is really passionate, caring and sensitive. She cares about the community and being a part of it and contributing to it,” Jen said.

Lilly said she wants to inspire other young girls to follow their dreams, no matter the age.

“If younger students saw somebody their age wrote a book, it would make them think they can do anything that they set their mind too,” Lilly said. “The sky is the limit.”