You are at:Home»Current in Carmel»Carmel Community»Thousands of Carmel students protest gun violence, some leave ‘frustrated’ with restrictions 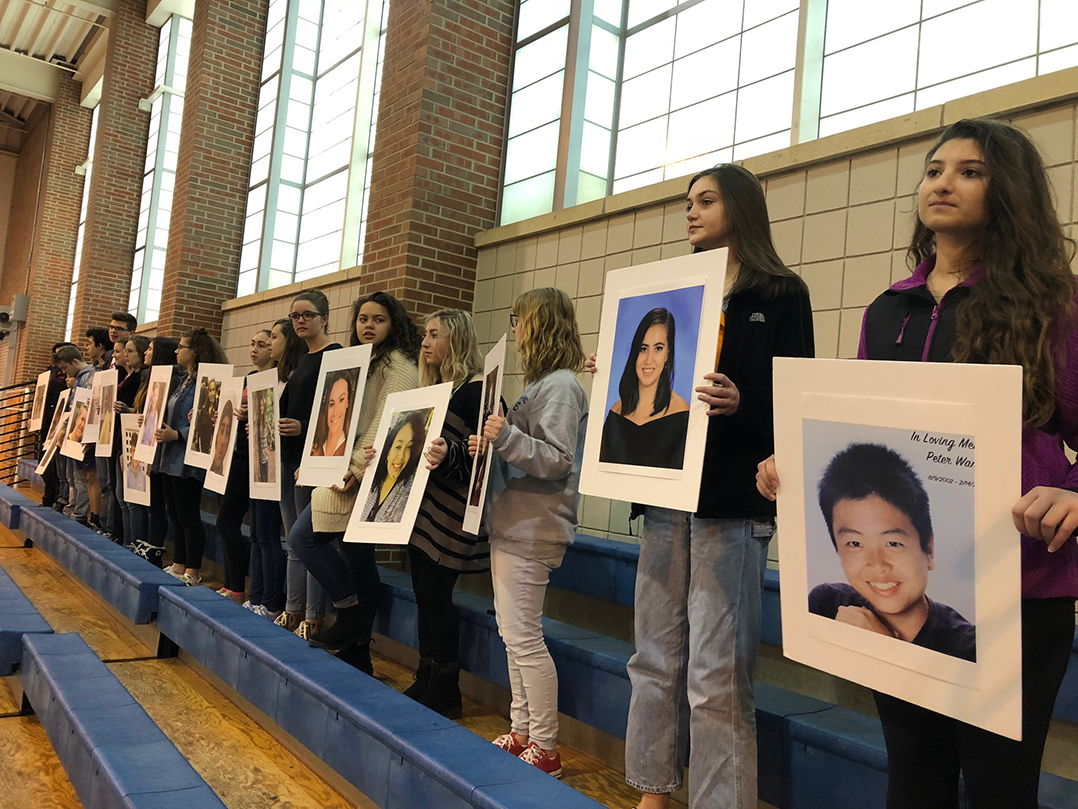 More than 1,000 students at Carmel High School participated in national walkout protests against gun violence in schools at 10 a.m. March 14. Students walked from the main school building to the fieldhouse, where a 17-minute indoor rally took place.

Some students held pictures of the 17 victims killed in a school shooting at Marjory Stoneman Douglas High School in Parkland, Fla., in February. Many students signed the pictures, which will be sent to the Florida high school to show support.

Students began the process of registering to vote at the event, which required a permission slip signed by a parent to attend. Approximately 20 percent of the student body participated, according to Carmel Clay Schools spokeswoman Courtney Taylor.

Carmel High School junior Sofia Balcius and freshman Isabella Fallahi, who organized the protest, said they were pleased with the turnout and the overall atmosphere at the rally.

More than 1,000 students at the middle school level participated in the walk out at their own campuses. Taylor said approximately 300 students walked out at Clay Middle School, 300 at Carmel Middle School and 500 at Creekside Middle School.

Clay Middle School eighth-grade student Sydney Rickel said she decided to participate in the walkout because she believes gun reform needs to be taken more seriously and to show that teens can make a difference.

She said she was among many students who felt the district got “far too involved for a student-led protest” by not allowing students to go outside. She said many students were planning to protest on the school track but teachers stood at every door preventing students from exiting.

“Students were starting to get frustrated,” she said. “What’s the point of a protest that’s supposed to give us answers when we have no one to be seen by?”

She said teachers “chased after” students who attempted to head outside and that students who left the building had to fill out paperwork.

Taylor said that 34 students at Clay Middle School attempted to walk out to the track and that teachers stood by doors as a “safety precaution.” She said the principal was stationed out by the track to monitor the situation and that those who went outside signed their names so the school could make sure everyone was accounted for. She said their parents were notified that their students went outside of the building.

Taylor said that three CHS students chose to walk outside to protest instead of attend the event in the fieldhouse. She said their parents were notified and administrators met with the students to discuss school safety.

“Keeping it indoors was a student decision. We would’ve worked with students if they wanted to be outside,” she said. “Student leaders didn’t want weather to be a factor. When it comes to having their voices heard, because you never know what the weather is going to be like, that was one of the factors.”

Though some opponents of the walkout had expressed concerns that students might walk out of class simply to skip out on schoolwork, CHS walkout organizers Balcius and Fallahi stated that all students participating “clearly cared” about gun violence and that many were “visibly moved, emotional and crying” during the rally.

“If any students did just come to skip class, then I hope they learned something,” Balcius said.

Neither Balcius nor Fallahi believe that the message of the walkouts will be forgotten or overlooked amongst other national news.

“This movement is student-led,” Balcius said. “This generation is going to grow up with a cemented belief about gun violence, and soon we’ll be the voters.”