You are at:Home»Current in Zionsville»Zionsville Education»Zionsville Community High School students peacefully walk out
By Heather Lusk
Approximately 200 Zionsville Community High School students huddled together in below freezing temperatures on March 14 at 10 a.m. as part of a national protest to demand stricter gun laws. The 17-minute walkout was also to honor the 17 people killed exactly one month earlier during a school shooting in Parkland, Fla.
A portion of Mulberry Street and the entrances to Colony Woods subdivision were closed during the walkout to ensure safety. 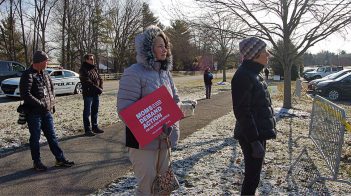 A dozen adults kept at a distance, yelled “thank you” and applauded the students as they re-entered the building.

Nancy Carpenter’s children graduated from ZCHS and she said she was proud of the students who participated.
“They give us hope for common sense someday,” she said.
Sue Bowron-White has grandchildren in the schools. She expressed that she wants her family to be able to attend school without fear of a school shooting.
“It’s time for our Congress to step up and stand up to the NRA and do what is right for America and our children,” Bowron-White said.
During the 17 minutes, students heard about the people who lost their lives in Florida, held a moment of silence and were read a poem. After the protest, ZCS Supt. Scott Robison expressed his appreciation for the way the students participated.
“It was peaceful, and they were exercising freedom of expression,” he said.
One man stood alone with a sign supporting the presence of guns in schools.
Nancy Carpenter national protest school shooting Sue Bowron-White Zionsville Community High School
Share. Twitter Facebook Pinterest LinkedIn Tumblr Email
Previous ArticleSMC outgrowing headquarters: Seeks tax incentives from city to double manufacturing, distribution
Next Article Carmel Clay parks board approves $5.6M for West Park expansion