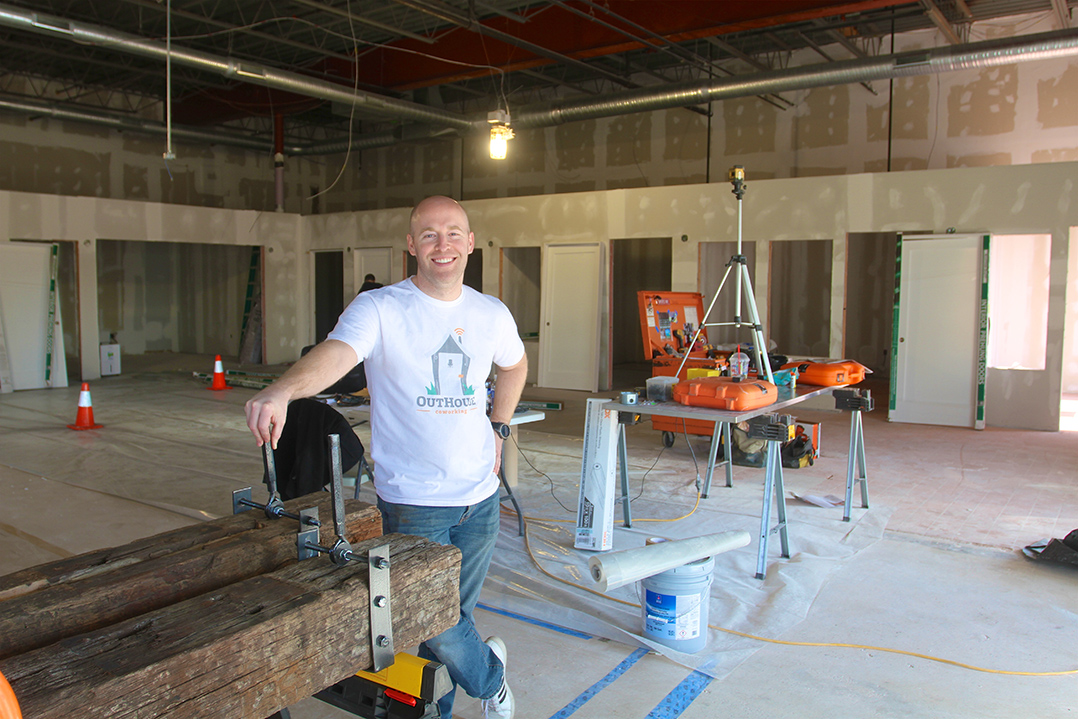 Taylor Jennings wanted to do something unorthodox when he combined a furniture showroom and a coworking space. The result is OutHouse,  a new coworking space where Jennings said there are “no wooden chairs you have to sit in for eight agonizing hours.”

OutHouse also doubles as the showroom for Jennings Commercial Interiors, which Jennings owns.

“It made sense to do a vertical integration between the two,” said Jennings, a Fishers resident. “I think there’s opportunity for companies like ours in the private sector to come in and really influence how entrepreneurs and remote workers are able to work.”

OutHouse’s slogan is “Don’t do your business at home.” Jennings said the coworking space is a remote location for people to work instead of commuting to a downtown office or working from home. It also shows Jennings Commercial Interiors clients real, organic usage of the furniture.

“The biggest focus for us is working with corporations downtown to set up remote locations, OutHouse locations, for staff to be able to work remotely rather than working from home,” Jennings said. “We are creating a satellite office for downtown corporations where they don’t have to sign a 5-year lease, and they don’t have to buy furniture, and they can know when people clock in or out.”

Jennings expects OutHouse’s first location, 540 Westfield Rd. in Noblesville, to open this month. He said the space can offer 120 to 150 memberships and accommodate up to 40 workers at a time in its 3,000-square-foot space. There are no offices but rather extra monitors, work surfaces, four meeting rooms, a game room and more. Seating is first come, first serve.

“Seventy percent of real estate is private offices and dedicated desks, and we are the opposite of that,” Jennings said. “We are going to be focused on a decent amount of events for people there and have everybody know one another. We will be focused on as much interaction as we can get. That’s the No. 1 reason people even leave their house, if they previously worked at home. Community is the No. 1 reason people want to get out of their house.”

Memberships are $129 per person. Members will receive a fob for 24/7 access to the workspace.

If startup businesses are utilizing the coworking space, Jennings said the furniture showroom serves another purpose as well.

“What you see a lot of times is startups growing out of the coworking space and moving into their next location,” Jennings said. “They are still at a level of risk because they have to sign a lease and buy furniture. What we are able to do when they start off with us is have all the furniture, ergonomics and technology they need starting off, so when they grow we can help follow them throughout that period with their furniture (needs).”

“I’ve been discussing locally for a few years with the city, with the chamber about how we get a Launch-type of coworking space in Noblesville,” he said. “Fishers has done a phenomenal job in breeding that model. Any community that’s not looking for a coworking incubator space is missing out on a huge economic development opportunity.

“We have so many small businesses of two, three, four employees that aren’t looking for a building of their own but a place to network and grow, and that’s where the incubator and coworking space comes into play.”

In addition to offices and conference rooms, the coworking space will also feature a game and break space with TVs and a ping pong table. (Submitted photo)

OutHouse to expand in other cities

For OutHouse owner Taylor Jennings, the coworking space’s first location in Noblesville is only the beginning. Jennings said he plans to expand into other cities, such as Lawrence or Lebanon. His plans to target cities with less than 150,000 people.

“We are interested in working with other cities that want to be able to provide this type of space professionally to the public, and we would like to be held accountable to show how we return that in economic development and value,” Jennings said.