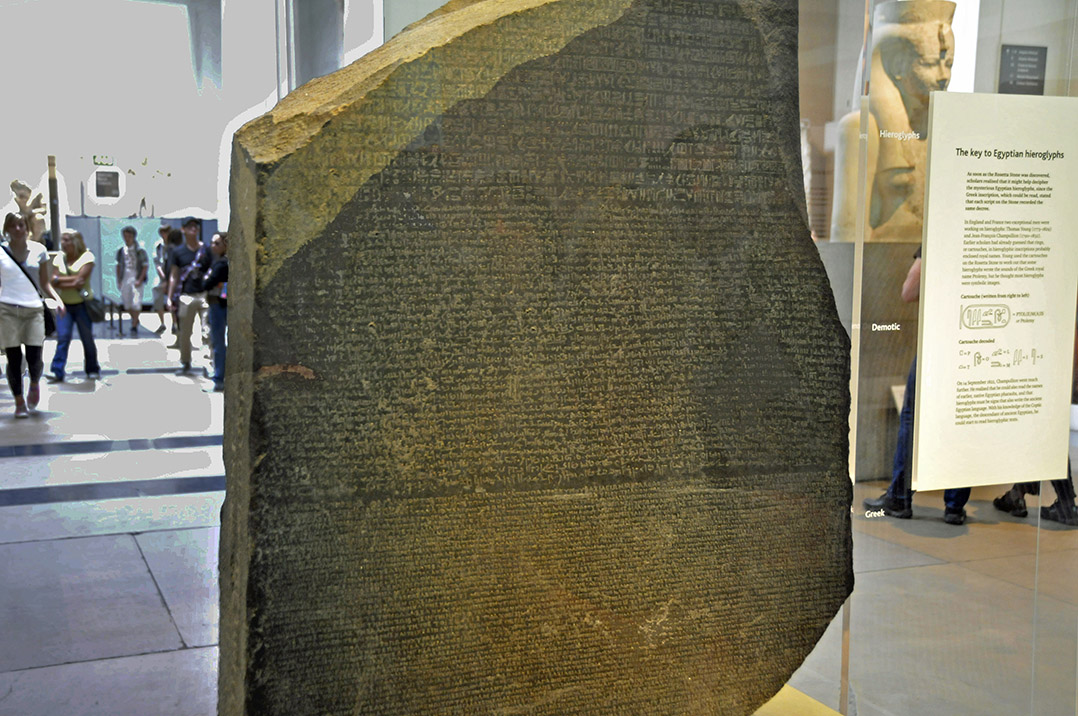 London’s British Museum, founded in 1753 to accept Sir Hans Sloane’s extraordinary collection of rarities from around the world, is the world’s oldest public museum, displaying treasures from every continent. Although many of its 8 million items provide insights into other cultures and eras, only the Rosetta Stone provided the key to understanding an entire civilization.

As visitors to Egypt know, the walls of its ancient temples and monuments are covered with hieroglyphs. After Christians closed the temples in the fifth century, knowledge of the hieroglyphs’ meanings was lost. Despite extensive efforts, scholars were unable to make any sense of the 1,000 symbols, most assuming that each symbol represented a different word or person. In 1799, a soldier in Napoleon’s army found a broken stele, weighing about 1,700 pounds and made of pink granodiorite, near the town of Rosetta in the Nile Delta. After the British defeated the French in Egypt in 1801, British soldiers obtained the Rosetta Stone, which they carried aboard a captured French frigate to London. They presented the stone to King George III, who donated it to the British Museum.

The Rosetta Stone includes three sections of inscribed text, the top section in hieroglyphs, the middle in ancient Egyptian Demotic script and the bottom in Greek. Scholars quickly understood the Greek section to be a proclamation issued on behalf of Pharaoh Ptolemy V in 196 B.C. Although scholars assumed the top section contained the same decree, it was another 20 years before Jean-François Champollion was able to translate the hieroglyphs, recognizing that the symbols could represent both words and sounds. This discovery eventually led to the translation of all hieroglyphs and a much clearer understanding of Egyptian history and beliefs. Today, the Rosetta Stone, behind glass near the entrance, is the British Museum’s most visited object.