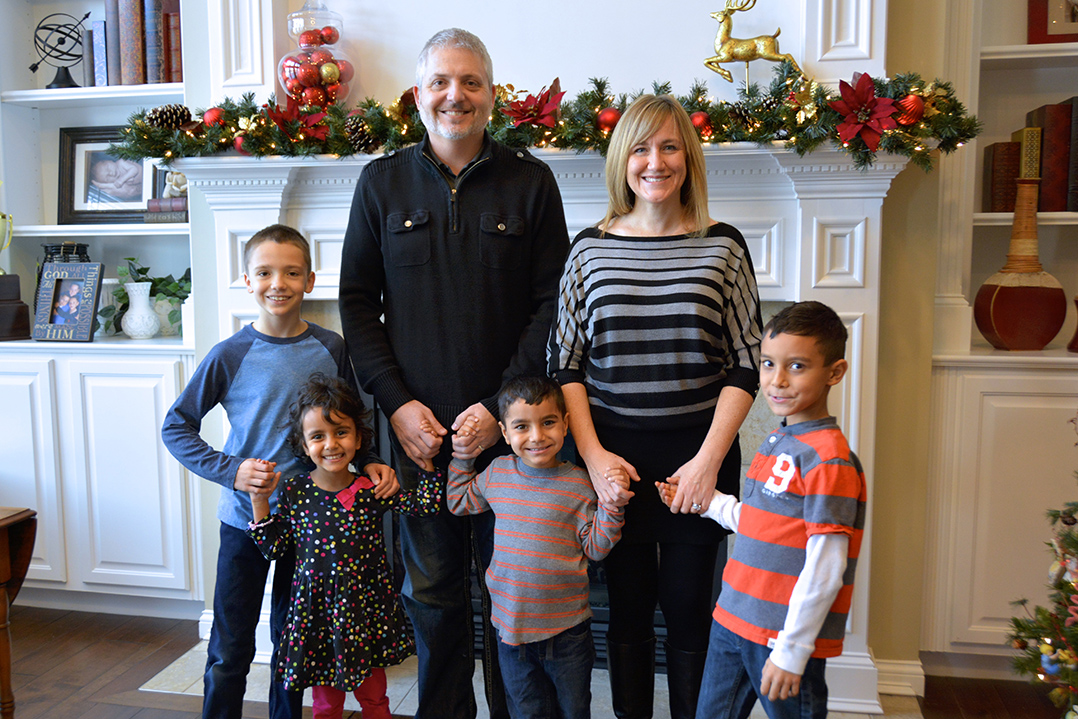 From left, Cooper, Maraya, Mark, Kevin, Mary K and Cooper Purvis are adjusting to life as a family of six. (Photo by Lisa Price)

For a decade, Mark, Mary K and Cooper Purvis had been a family of three, but that changed in August 2017 when they opened their home to three Bulgarian siblings through adoption.

It wasn’t always easy adjusting to double the number of people in the family, but Maraya, Kevin and Vesselin are finally starting to settle into life in Carmel and build lasting bonds.

Mark and Mary K were introduced by friends after college and celebrated their 12-year wedding anniversary in October 2017. They said they both wanted children since the beginning, but adoption wasn’t always part of the plan.

“We were older when we got married and had Cooper,” Mary K said. “Anything that could go wrong, did. So by the time we were ready to try for more kids, it just didn’t happen.”

Mark said they discussed adoption for years before truly jumping in and exloring  options. When they decided their search wasn’t limited to the U.S., the Purvis’ expanded their search internationally.

Mark attended a counseling service’s seminar that offered fertility, fostering and adoption resources where he discovered MLJ  Adoptions, an Indianapolis-based agency. MLJ has worked in Bulgaria since 2010. Bulgaria is part of the Hague Convention on the Protection of Children and Co-operation in Respect of Intercountry Adoption, a treaty that outlines rules and safeguards for international adoption to ensure the best interests of the child. 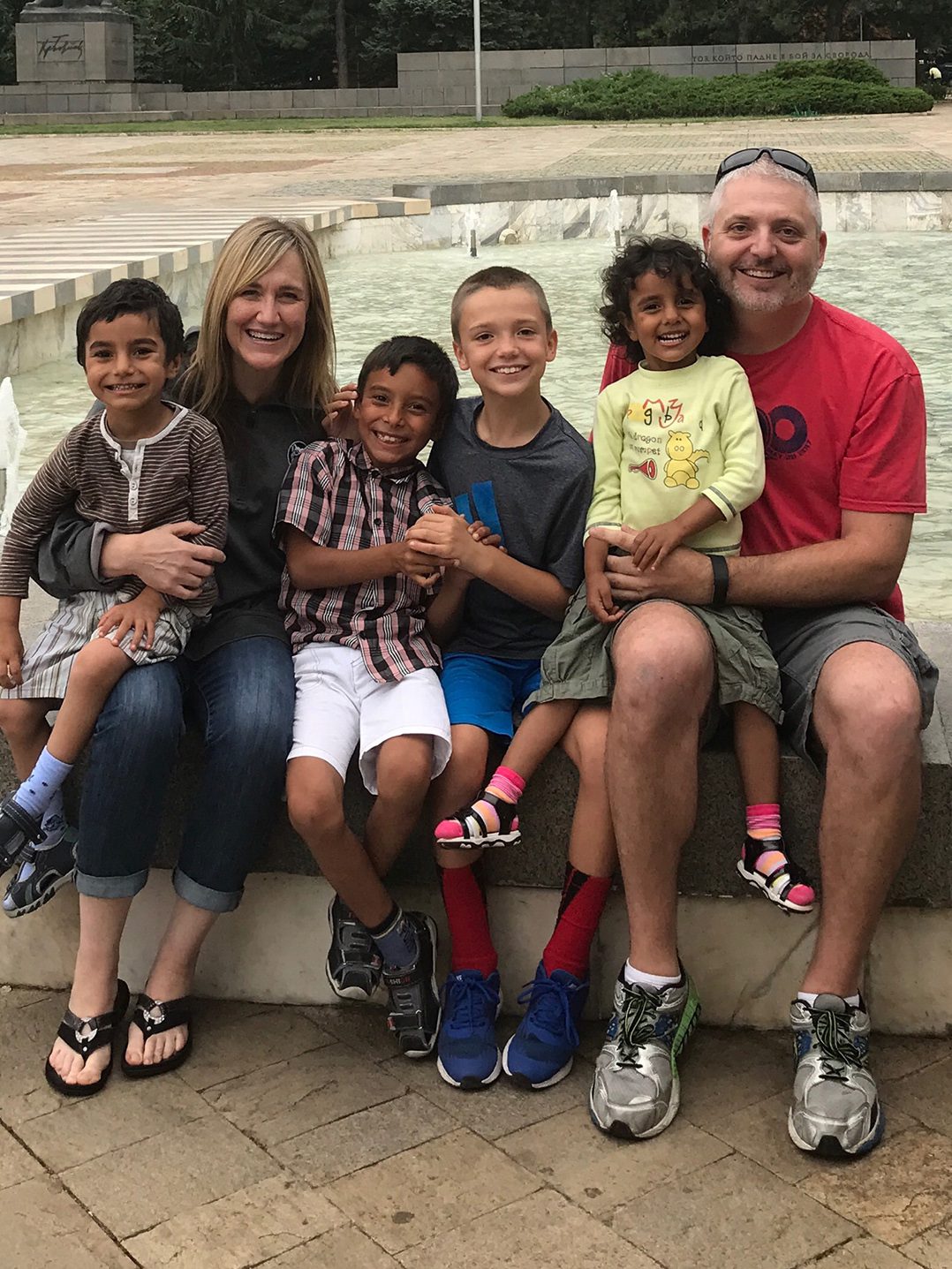 The Purvises first photo in Bulgaria as a family of six. From left, Kevin, Mary K, Vesselin, Cooper, Maraya and Mark. (Submitted photos)

The Purvis’ began adoption paperwork in January of 2015, originally indicating they were searching for two young siblings. When 10-year-old Cooper found out he might become an older brother, he was excited.

After one year without a match, areas of the paperwork needed updating, so at that time, Mark and Mary K also increased the ages and number of siblings they were searching for. They said faith played a large role in that decision and helped them believe everything would work out.

“It’s always there, but I think faith was a huge part of deciding three kids,” Mary K said. “In the beginning, we talked about one or two, but we decided (three) if we could keep siblings together.”

The Purvis’ filed the updated paperwork in the winter of 2016 and were approved to adopt three children the following February. They were matched with a group of siblings in April 2017.

In May, Mark and Mary K flew to Bulgaria to meet Maraya, Kevin and Vesselin. They Skyped every Sunday from then until the Purvis’ returned to Bulgaria in August to finalize the paperwork and bring the children home to Carmel.

Mark said the family has been adjusting to a “new normal” the past few months. They had parented only a single child before, so he said they had a lot to learn about siblings. 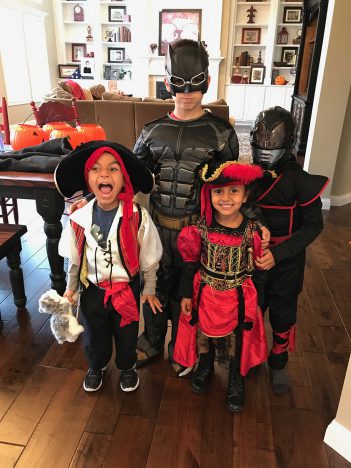 “It kind of went in phases,” Mary K said. “We knew language going in would be tough, but I think there were some behavioral aspects that I wasn’t prepared for.”

Mark said Vesselin, 7, was afraid and that fear manifested as defiance toward them or violence toward his siblings. The language barrier created tension and caused tantrums. The children also needed time to get reacquainted, because Maraya and Kevin lived in a separate foster home from Vesselin for the last two years.

“We’d wake up and (think) the day can’t end quick enough,” Mark said.  “It was that hard. But now, we look forward to doing certain things and it’s not that fear.”

Mary K stayed home from work for 12 weeks and received help from neighbors, family and church members every day for the first six weeks. When she returned to work, daily life at the house calmed down and the children’s English improved.

Vesselin is a first-grader at West Clay Elementary while Maraya, 4, and Kevin, 5, are in preschool.

“The best part is knowing that they accept you and that we’re mom and dad now,” Mary K said.

Mark and Mary K Purvis offer the following tips for those interested in adoption:

2. Be comfortable with your collaborators.

3. Identify members of your support group who you can lean on.